Death is universal. But the way people deal with it is not.

This fact is the basis of an exhibit that opened recently in downtown Salem. 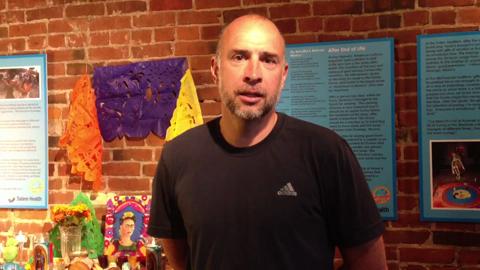 Salem Health and the Salem Multicultural Institute partnered to put on the End of Life exhibit in the World Beat Gallery, homing in on the process of dying from a cultural perspective. The three cultures highlighted are Hispanic, Russian Old Believer and Micronesian.

Dr. Nancy Boutin is medical director of Salem Health’s Salem Cancer Institute as well as the Palliative Care Program. She said the three groups are among those the hospital staffers see most often.

In the twenty-something years Boutin has worked in Salem, the cultural diversity of patients has greatly increased. At the same time, the provider community has not.

So the exhibit was a way to educate the medical professionals on beliefs and customs around end of life. The hope is that greater awareness will help medical personnel be more sensitive to the needs of different cultures.

“I am aware now that, despite my best intentions, I’ve done things that probably have caused discomfort, if not actual pain, to families,” Boutin said. “Just because I didn’t know.”

So that’s how this exhibit was conceived, but it has the potential to start meaningful conversations for the general public, too.

Graham Morris, executive director of Salem Multicultural Institute, says death is not something people like to talk about. But families might benefit from doing so. Questions surrounding where and how you’d like to die, organ donation, cremation and burial are a few topics to think about.

The exhibit won’t provide you textbook information on where the three cultural groups land on those issues. In fact, you’ll notice that there are differing opinions within the same general group.

The information for the exhibit comes from interviews with people who live in the Mid-Valley, which offer a sense of authenticity.

And while the featured cultures originate in vastly different parts of the world, there are some key commonalities in the way they think about death.

Extended family members gather around food in an event prompted by death, for example. People have a desire to die with forgiveness and peace in their hearts, whether it’s in personal relationships or with a higher being. They also want to die or be buried on their home turf.

The exhibit, which is on the second floor of the Reed Opera House in downtown Salem, requires a lot of reading. The most visual aspect is an example Day of the Dead altar, which is used in Mexico to honor the deceased. The display includes colorfully decorated skulls and yellow marigold petals.

If you take the time to read through the information, you’ll learn that hospice isn’t an attractive option for people in Latino cultures, possibly because the Spanish word “hospicio” means orphan asylum.

In Ukrain, death is not accepted until all options for recovery have been tried and the person has actually died.

Those in Micronesian communities may not agree with organ donation because of beliefs that alteration or intrusion into the body could harm the soul.

I asked Boutin how she thinks the exhibit might influence the way she and her staffers serve patients. There wasn’t a straight answer — and perhaps for the better.

Cultural education offers a wider understanding of different people’s needs and beliefs. It doesn’t prescribe routine practices. Death is too personal for that.

Both Morris and Boutin agree that the exhibit, while it is about end of life, is just the beginning.