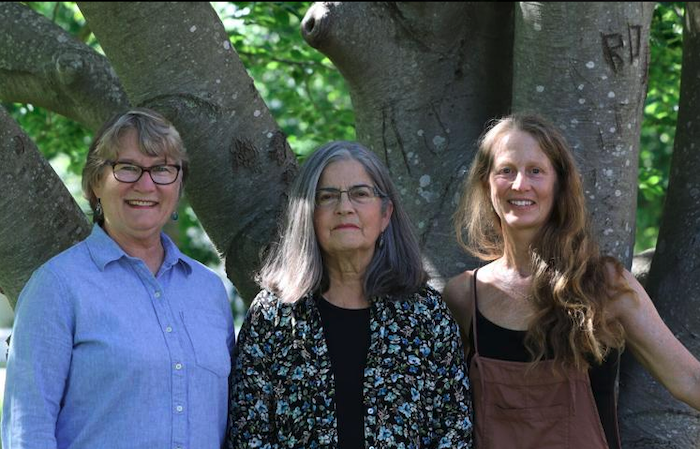 As a master gardener, Noreen Kepple is familiar with the natural cycle of life — with birth and growth, with dying and death. Her next chapter is a natural progression.

“Human beings are part of that cycle,” Kepple said one day last week as she spoke about her work as an end-of-life doula. “I think that’s what led me to end-of-life care.”

Kepple, 70, an early childhood educator by training, spoke recently at Stonington Free Library about her new calling — accompanied by Greta McGugan and her sister-in-law, Lavina Kepple — at a presentation titled “What is an End-of-Life Doula?”

This presentation, designed to discuss a doula’s role in the dying process and share ways doulas enrich the dying experience for patients and their families in non-medical ways, was well-attended and attracted many “brand-new people” to the library, noted Karla Upland, library assistant director.

The Kepples and McGugan, all Stonington residents, completed the certificate program at the University of Vermont’s Larner College of Medicine in 2020, where they studied to become end-of-life doulas. The term, Noreen Kepple said, is becoming more and more popular as members of the baby-boom generation come of age.

Add the pandemic to the mix, she said, and the thousands of people who were forced to die alone in hospitals while separated from family members, and there’s no wonder people have been pondering their own end days and those of their loved ones.

“Most people in this country die in hospitals,” Noreen said. “I think many more of us hope to die at home. … The pandemic underscored the need for people to not die alone. People are thinking about their own deaths and of how they’d like it to be. Dying at home can be a more rewarding process.”

Dying at home, she continued, is also a process that can be guided with help from a trained doula.

The word “doula” — which comes from the Greek word meaning “woman who serves” — is often associated with birthing, babies and new mothers. In the last few years, as more and more people seek to take control of their own dying experiences, it has become also associated with the dying process.

“Birth and death are so similar,” said McGugan, 56, the mother of three adult children and the grandmother of 10 who was present at the births of her grandchildren. “They’re really the same thing.”

An “end-of-life doula,” Noreen Kepple told the 30 people gathered at the library, can also be known as a “care doula,” a “death midwife,” an “end-of-life coach,” a “transition guide,” a “soul midwife” and “many, many others.”

Whatever the name, she said during a phone interview last week, an end-of-life doula is a non-medical companion who offers emotional and sometimes spiritual support to the dying and their families.

“A doula can have many kinds of service,” Noreen Kepple said. “They can help plan a vigil, help with paperwork and legacy projects.”

If someone is a good cook, for instance, Kepple went on, a doula might help organize recipes.

“It’s important to be present, to be an active listener and to be open-minded.”

“Open minds and open hearts,” said McGugan. “We meet people where they are.”

“Back in the day,” McGugan said, people would have learned about dying at home and probably would have been present at the passing of a grandmother or elder relative, and would have been “holding the hands” of the person passing.

“We weren’t as afraid of death then,” she added. “Today we live in more of a death-denying culture.”

“Our culture has a hard time with death,” said Lavina Kepple, 73, a former schoolteacher who is training to be a hospice volunteer. “Taking the course really helps you look at your attitudes about death and dying.”

One of the books the three women studied while taking the online program through the University of Vermont, Noreen Kepple said, and one she recommends to people interested in learning more about the work of a doula is “Cultivating the Doula Heart: Essentials of Compassionate Care.”

The book was written by Francesca Arnoldy, the program director and course developer at UVM’s doula certificate program.

Arnoldy, who is also a bereavement researcher with the Vermont Conversation Lab, a hospice volunteer and author of “Map of Memory Lane,” said the program has grown exponentially since its inception in 2017.

As more and more people want an “intentional” dying experience, Arnoldy said during a telephone conversation from her home in Vermont one day last week, and choose to “personalize their end of life,” it makes sense that more and more people are enrolling in the eight-week online class, which prepares participants to “meet the growing demand for end-of-life support as people live longer.”

“I just trained nine more people to be instructors,” Arnoldy said of the program, which includes topics like “Dimensions of Grief and Loss,” “Non-Judgmental Support, Acceptance, and Unconditional Positive Regard,” and “Entering Sacred Space.” “And we are already full for this year.”

“We do lots of sharing,” Arnoldy continued, noting that coursework requires roughly eight to 10 hours of studying a week. “It’s deeply personal … and there’s lots of feedback … lots of support.”

The course is appropriate for all those interested in exploring end-of-life possibilities, she added.

“Everyone has a seat at our table,” Arnoldy said, “although people with fresh grief might want to take time to heal before enrolling.”

“As a doula, I trust in my clients’ inherent wisdom and strength,” Lavina Kepple told the group gathered at the library last month as she read aloud from Arnoldy’s book. “A doula knows that each person is entitled to the completeness that is his or her journey.”

“It’s important to get people aware that doulas are out there,” said Noreen Kepple, who suggested that, in addition to the program at the University of Vermont, people interested in doula work look into an organization called The National End-of-Life Doula Alliance, a nonprofit that “welcomes and supports all end-of-life doulas, trainers, and interested parties, regardless of background or level of experience.”

The three women are already planning their next talk, a training session for the staff at Seniors Helping Seniors in Mystic.

Upland, who organized the sound and livestreaming technology for the Stonington Free Library presentation, has also made it available on the library’s YouTube channel via the library website.

The doula presentation at the library was well-received, Upland said in an email. “The audience was very engaged and attendees expressed interest in either employing an end-of-life doula for a family member, or becoming trained as doulas themselves.

“Many of the questions revolved around locating and engaging local end-of-life doulas for palliative care work,” she said.