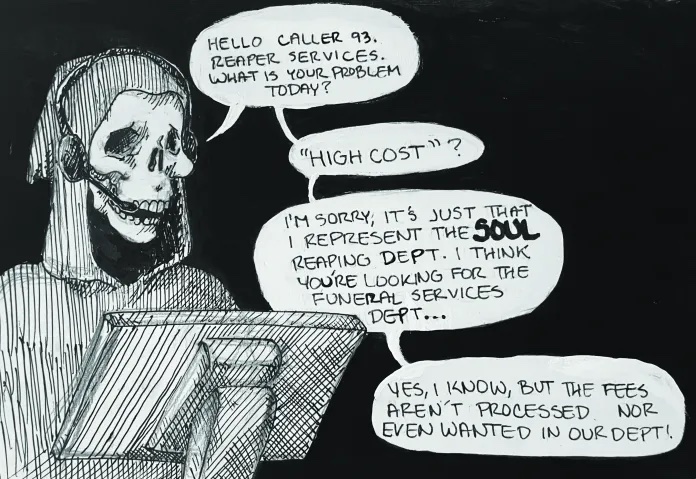 In the spirit of October, I figured I should speak on a topic I’m passionate about, as someone considering end-of-life care as a career (I gag at the connotation of making a career of death care, but such is the nature of capitalism): the funeral industry. Let that phrase sink in for a second: Funeral. Industry. Death that generates financial capital. Death, a necessary and inevitable part of the human experience, costs and generates money.

Death is a tough subject, and for good reason. It’s a reminder of all of our mortalities, and that’s a lot to be confronted with, especially considering how capitalism makes us proletarians believe that we’re inhuman, that we’ll simply be exploited for an indeterminate amount of time, and then disappear from relevance. This alienation from mortality and personhood diminishes the depth of life brought about by our own mortality, and then, once confronted with it, the capitalist robo-proletarian illusion shatters, bringing great distress but no room to heal from it due to the standard 9 to 5 workday and low wages.

Let me step back and explain what I mean by this though. Many people work some variation of an eight hour shift job. If they’re full time, that’s about 40 hours per week, sometimes more, which leaves one or two days off. The Ford model of the work day is supposed to be eight hours of work, eight hours of leisure, and eight hours of rest. This treats human needs as if they were easy to standardize. It takes no account for commutes, obtaining and preparing food, the amount of sleep an individual needs to function, or difference of ability as this does vary widely in the working population. Some people forfeit another one of these eight hour blocks, working two jobs to make ends meet. How much time does that leave for the necessities: nourishment and sleep? Not much. How much time does that leave for self-actualization? Barely any. So how much time does that leave to process grief specifically? Almost none. Capitalism forces us to go about our lives broken and exploited, many without the means to mend our psyches due to the high cost of mental healthcare (and healthcare in general).

Now to the funeral industrial complex. Think for a minute—what would you consider a dignified burial for a loved one who left behind no death plan? Maybe cremation, maybe burial in a casket, but not much else. Cremation is the cheaper option, and embalmed casket burials are often expensive. Not only do they take into account the labor from the funeral home for a service, but also the labor of embalming (which is widely overused in the United States due to its popularity in the Civil War for the transport of the bodies of soldiers) and the price of the casket and headstone. Caskets run around $1,200, give or take, and funeral homes often mark them up to generate profit. Headstones vary widely but can run from around $65 to over $200 . This doesn’t take into account any markups from manufacturers either. Plots can run around $350 to $5,000, embalming costs upwards of $500. Add in flowers and concessions and you get an idea as to why traditional American funerals are so expensive.

So, I would like to talk about some alternatives. Firstly, there’s donating your corpse to science (which is my plan). This involves one’s body being brought to whatever scientific institution needs cadavers (medical schools mainly) for educational use, and then discarded in mass graves afterwards. There are no direct costs with this approach, but you can always hold a service for a loved one who donates their body, just without their cadaver. There’s also natural burial, either in a plain shroud or one with a seed pod. Connecticut has multiple natural burial grounds around the state. Better Place Forests prices ceremonies based on the memorial tree you want, starting at around $5,900 for the cheapest option. Depending on the grounds you choose, prices will vary, and without a tree the burial would be cheaper as well. Other options include Aquamation (which is legal for humans and pets in Connecticut, for those concerned with eco-friendliness) and feed blocks (mixing cremated remains into feed blocks for woodland animals).

So, what changes do I think need to be made?

I think that funerary and end of life care should cease to be an industry; just as medicine, infrastructure, internet, plumbing and the like should cease to be industries. A shift in governmental values from those serving the class with the highest accumulation of capital to serving the working class. A shift towards democracy centered on proletarian needs. A shift to a human collective-centered culture, rather than a profit-centered one. Replace dog-eat-dog with camaraderie. Truly place power in the hands of the people, and build a world of collaboration and healing.