In her new book, Hayley Campbell seeks to demystify death by sharing the perspectives of funeral home directors, gravediggers and others 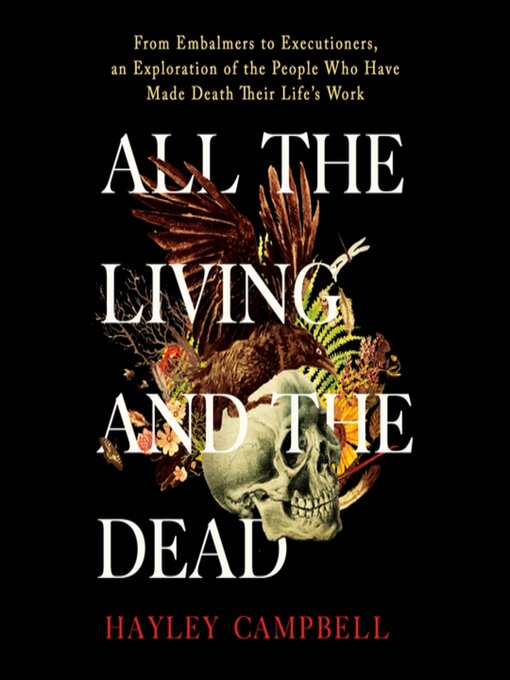 What happens when people die is often glossed over. Yet as the adage goes, death is one of life’s few certainties.

Journalist Hayley Campbell in her new book, “All the Living and the Dead: From Embalmers to Executioners, an Exploration of the People Who Have Made Death Their Life’s Work,” sets out to demystify death by writing about “the naked, banal reality of this thing that will come to us all.”

It’s a subject for which Campbell, 36, has been preparing for most of her life. As a little girl, she recalls death being ever present — she drew dead bodies after seeing her comic book artist father’s graphic novel about Jack the Ripper in progress, questioned the version of death from her Catholic school education and saw her first body at 12, when her friend, Harriet, drowned while trying to rescue her dog. The London-based Campbell has since written regularly about death and related topics for Wired, BuzzFeed, Vice and other publications.

“On an existential level, we have to think about death; not only will we die, but everyone we know and love will die.”

In “All the Living and the Dead,” Campbell spends time with those whose professional lives revolve around death, including funeral directors, gravediggers and an executioner. Warning to anyone who’s squeamish: She provides vivid details of what it’s like to dress the dead, perform an autopsy and process bodies for use in medical education.

“On an existential level, we have to think about death; not only will we die but everyone we know and love will die,” Campbell told Next Avenue. “I can see why people would avoid that topic, but once you start talking about death with people for whom it’s their job, you can see how you can compartmentalize it.”

Here are some key takeways about death — and life — from Campbell and the book:

Death is Never Far Away, Whether We Acknowledge It or Not

As part of her research, Campbell went places where few civilians dare. “We don’t want to think about it, so it’s sort of a secret,” Campbell says of many death rituals. “I love seeing the stuff that as a general civilian person you can’t see. It can be behind doors you pass every day — on every high street, there is a funeral home — but you don’t realize something interesting is happening there every day.”

Even when we must go to a funeral home, whether to plan a service for a loved one or attend a memorial, the experience is usually a fleeting encounter. For those in the funeral industry, it’s their way of being.

“It was a huge privilege to talk to those people,” Campbell says. “The thing they kept telling me was they do this job every day. When families have to use them, the family will be hugely involved and their best friends for two weeks. After the funeral, they will disappear and go back to not thinking that embalmers exist. I wanted to get through the appreciation of the work that has to happen. The world would look completely different if we didn’t have people collecting the bodies.”

There’s a Difference Between Being Desensitized and Detached About Death

As we enter middle age, death becomes ever more prominent, as we face the loss of parents, siblings, close friends, a spouse or partner — and our own mortality. Yet few of us are prepared for major loss. But when death is your reality, you have to develop a way to compartmentalize.

“People think death workers must be desensitized, but there’s a difference between people being desensitized and detached in a way that’s helpful,” Campbell says. “They’re not not thinking about death — they have thought about it a lot and stepped back just enough to do their jobs. They have thought about it so much that they have made peace with it. But I don’t think we as a society have been able to deal with it. So when someone dies, we completely fall apart.”

A New Generation is Rethinking the Funeral Ritual

As a younger generation — including more women — enter the funeral industry, rituals and attitudes are changing. This might mean a more personalized funeral service, a natural burial without a body being embalmed or even loved ones participating in a traditional ritual like dressing the dead, as Campbell did as part of her research.

“The role of the funeral director has changed to more of a counselor role rather than someone who just organizes the hearse,” Campbell says. “I do think women are changing it. Female funeral directors are more into letting families do things the way they want. But if they want tradition, they will organize it with the horse and the cart. I think they are just more open — the thing that is common among all the women in the funeral industry is they want to give people a voice and not force a certain way of doing anything on anyone.”

“The role of the funeral director has changed to more of a counselor role rather than someone who just organizes the hearse.”

Details Matter When Handling the End of Someone’s Life

Whether it’s the funeral director who kept underwear and socks in different sizes because families often forgot to bring undergarments for their loved one and he couldn’t live with someone not being properly dressed in their casket — or a gravedigger who provided a certain type of soil for the minster to throw on a coffin that would land more softly, those dealing with death regularly understand the difference the smallest details can make.

“They all had a sense of compassion and a sense of empathy,” Campbell says. “They all were doing little things in their job that no one would notice but they felt was the right thing to do. It may seem like something small, but when you think about grieving people and how they are so sensitive to everything, they are massive.”

Death Has a Way of Grounding You

Having written about death for most of her career, Campbell is not someone who’s faint of heart. But having immersed herself in death for three years to write the book, she came away with a new appreciation for life.

“It’s not like my eyes have been opened to things that I didn’t know about but the details have been filled in,” Campbell says. “I’ve seen dead babies and old, old dead people. I’m far more conscious of the old cliché that life is short. That is true, but you have no idea how much time you’re going to get. I think I’m more conscious of time.”