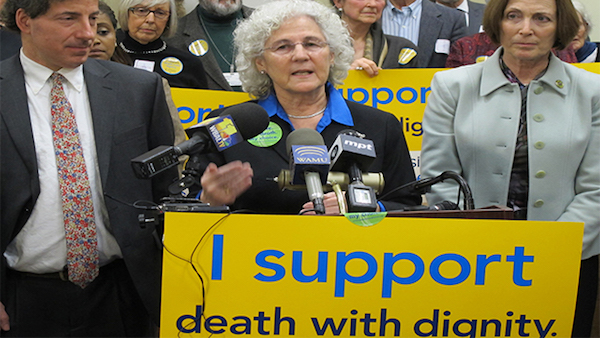 [T]here’s been an unexpected, and excellent, consequence to California’s new medical aid-in-dying law. For many terminally ill patients, immersion in the process of securing lethal drugs ultimately renders them unnecessary. How did this come about?

Passed by the California legislature in late 2015, the End of Life Option Act allows physicians to prescribe a lethal concoction of drugs to some patients with terminal illnesses who meet certain criteria. The law, commonly described as providing “medical aid in dying,” took effect on June 9, 2016. It stipulates only that the requesting patient be considered terminal (less than six months away from death), possess full decision-making capacity, and be physically able to self-administer the life-limiting drugs. Although the physician is obligated by law to inform the patient of alternative care options, such as psychological counseling or symptom management with palliative care services, there is no direct requirement that the physician arrange or provide them. In its barest form, the option can serve as a dispensary for life-ending medications.

California’s medical community was taken by surprise by the rapid passing of the law in late 2015. It came on the heels of the dramatic case of Brittany Maynard, a young woman with terminal brain cancer who elected to move from California to Oregon to access medical aid in dying under that state’s Death with Dignity Act. Hospital systems and physicians in California suddenly found themselves with an urgent need to rapidly formulate policies around this new right of patients. Some, such as the Catholic Health Systems, opted out on religious grounds. Others scrambled to put basic policies in place for patients who met inclusion criteria. And some institutions decided to put significant time and resources into supporting this new legal reality in the most comprehensive way possible.

One standout example is the University of California, Los Angeles (UCLA) Health Centers. After literally thousands of hours of discussion, the working group determined that the intake process for patients requesting medical aid in dying should be conducted by trained psychotherapists (psychologists and clinical social workers) instead of physicians. Dr. Neil Wenger, director of the UCLA Health Ethics Center, led the effort to create processes and infrastructure to respond to this law. “We wanted to be able to offer a service that doctors tend to gloss over,” he said, when asked why they chose to lead with talk therapy. The intake consisted of an extensive set of questionnaires designed to assess all possible sources of distress. Any patient with physical or psychiatric needs was referred on to the appropriate services. But as the UCLA committee expected, most of what patients needed was to discuss their feelings about their approaching death and process their grief and sense of loss. This mirrors data from the entire state of California as well as Oregon, which suggest that the distress prompting patients to request these lethal medications primarily stems from their fear over losing control at the end of life. It is not, as many may think, due primarily to physical suffering.

The intake questions explored goals of care, quality of life, and patients’ emotions around their impending deaths: Were they ready? What scared them? What made them anxious? Did they feel their lives were complete? What did they feel makes life meaningful? What decrements in quality of life are too great? What haven’t they said and to whom? Anne Coscarelli, psychologist and founding director of the Simms/Mann–UCLA Center for Integrative Oncology, described the conversations that came from this intake process as revelatory and comforting for the patients. Several patients ultimately completed legacy projects, such as video or written messages and stories, for their children and grandchildren. This invitation to talk, which opens up a discussion that most of us are taught to avoid, turned out to be a game-changer.

Only a quarter of the patients ultimately went on to ingest the lethal drugs they came requesting. The actual data is more complex: Some who requested this service did not meet the basic requirements to receive it. Others died before they had a chance to ingest the medications. But the staff from UCLA reported case after case in which patients’ goals shifted from wanting to hasten their deaths to deciding to live out the remainder of their lives.

Ours is a culture that does not talk about death, even when it should be impossible to ignore. Despite the fact that 89 percent of people think that it is a doctor’s responsibility to discuss end-of-life care with their patients, in reality, only 17 percent of patients report having had such a conversation, according to a 2015 survey from the Henry J. Kaiser Family Foundation. As a doctor who practices both critical care and palliative care medicine, I have presided over thousands of deaths. Most of my patients have suffered with chronic illnesses for years: metastatic cancers, failing lungs, and progressive debilitation from dementia. And yet almost none of them have discussed their own death with their doctors, or even their families. Most have no idea that they are actually dying. In this culture that operates on a fantasy of immortality, with unrealistic promises made by television shows and advertisements, doctors see themselves as failures if they are unable to cure their patients. We physicians are trained to lead patients into battle after battle, into the next procedure or intervention, banking always on that magic pill or miracle cure.

This broad cultural unwillingness to acknowledge death results in a phenomenon I call the “End-of-Life Conveyor Belt,” where high-tech treatments are automatically attached to bodies as they progress through the stages of dying. As the baby boomers age and our treatment options blossom, more are being exposed to the suffering brought about by these protocols. The tremendous anxiety we see over loss of control is understandable. It is no wonder that people in many states have asked for, and finally won, the right to take back that control with a pill.

The effort by UCLA Health seems to be working. Placing highly trained psychologists and clinical social workers in the critical role of “first responder” to a patient’s request to hasten death has rendered many of these requests obsolete. In choosing this approach, UCLA is effectively “de-medicalizing” the experience of dying by prioritizing the need for deep reflection. In this way, the program provides patients with an option that doctors are not primarily trained for.

Patients requesting support to hasten their deaths are only a small subset of the population of the dying. They are in some ways canaries in a coal mine, their request for medical aid in dying is alerting us to the unmet needs of the wider population of dying patients. And what I am seeing is that our new legal responsibility to steward these patients responsibly through this rocky terrain will build practices and skills that will help all of those at the end of life.

Where goes California, thus goes the nation. California was the fourth state to legalize medical aid in dying and has since been followed by two more. And UCLA’s approach, with trained psychologists guiding patients through this tricky terrain, shows us the way. Let’s take advantage of this wave to take better care of all our seriously ill patients. And let’s make sure we give patients what they really need and hope that lethal drugs are always the last tool in the toolbox.