I found myself terminally ill and unexpectedly single at 40. I didn’t know which was more terrifying. 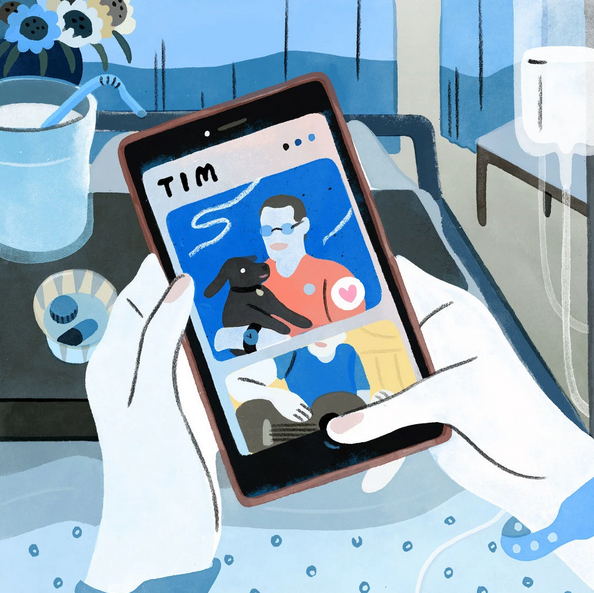 One night, as a friend and I were headed to a bar to see someone I had met on a dating app, she asked, “What do you tell these guys?” I pulled up my profile and handed her my phone.

“I have cancer so if you want to hang out, act now!” reads the first line.

“This is great,” she said with a laugh.

A year ago, when my treatment was going poorly and I was getting sicker, my boyfriend of 12 years took a business trip to London, where he “reconnected” with an old friend, a recently separated Pilates instructor. After he booked himself a solo trip to Europe, I overheard him talk about how much fun he had riding around on the back of her motorcycle, holding her hips. He also said he enjoyed walking around by himself without thinking about cancer. And me, apparently.

And that was it. Our relationship was over. I found myself dying and unexpectedly single at 40. I didn’t know which was more terrifying.

My cancer isn’t going away. It’s being treated as a chronic disease. I’m definitely going to die from it, if I don’t get hit by a bus. (Why do people always offer that as an alternative to dying of cancer? “You never know!” they say cheerfully. “You could get hit by a bus tomorrow!”) Doctors buy me time and wellness with treatments, injections and transfusions. I have months of wellness, if I’m lucky. But over all, probably not much time.

The truth is, I was prepared to die instead of date again. From what some people told me, I might as well already be dead as a single woman over 40.

Right after the breakup, I resisted dating. I knew I’d have limited time to spend with people I care about before I got sick again. Why would I want to meet strangers? Still, friends pushed me into it. Sometimes literally. At Octoberfest in Copenhagen, the friend I was visiting declared, “You can’t let your last experience be so awful,” as he steered me into a crowd of Danish men in lederhosen drunkenly dancing and singing to “Time of My Life.”

Back home, my resolve weakened. One night I saw my ex at a concert with the woman he left me for. I didn’t feel sad or jealous, just relieved it was her and not me putting down a credit card at the bar to buy his drinks. It was time to move on.

One friend helped me sign up on a dating app. Another — the person who would become my dating app Sherpa — helped me with my profile and photos. “This guy has a picture of himself with Bill Murray,” I noted as I started swiping for the very first time. “Tinder is full of pictures of Bill Murray,” my friend said sagely.

Since my cancer diagnosis six years ago, I’ve had poison pumped into my veins, tubes threaded into my neck, organs removed, radiation tattoos applied. I’ve shaved my head multiple times. I’ve coughed up pieces of my esophagus. Doctors have given me a spinal tap and rooted around my bone marrow with a needle. But meeting a stranger for a date filled me with dread. “I’d rather be getting a bone marrow biopsy,” I texted my friends before marching out to meet my first date in more than a decade.

But I went. And it was fine. Fun, actually. So I stuck with it and dated some more.

After one great date, I had a crushing realization: I have only the present to offer, not a hopeful future. “You don’t know that,” a friend told me.

“Because I could get hit by a bus tomorrow?” I replied with a weak smile. Within a month I had given myself a black eye, chipped a tooth and skinned my knee. That morning, I had almost stepped off a curb into the path of an oncoming van. The likelihood of meeting my end slipping in the shower actually seemed to be edging out the cancer.

“No,” she replied. “Because you could still be complaining to me about dating when you’re 90.”

As I went, I made dating rules, then broke them. I pay for myself, because letting someone else pay feels too transactional. Plus, after years of paying for myself and my ex, it still seems like a good deal. I don’t eat on first dates, because it’s an ugly scene.

Then, after a meet-up drink, someone asked me to have dinner with him and insisted on paying. I told him, as I devoured a duck breast like I was a medieval king, that I don’t eat lambs because they’re cute, and I don’t eat octopus because they’re smart, but it’s O.K. to eat ducks because I read that they can be necrophiliacs. “If you think about it,” I said, motioning with my fork to my smoked duck in soy-honey jus, “being eaten is really the second worst thing that can happen to them after they die.”

I am great at date conversations. Cancer? Necrophilia? Pick a topic.

What is someone with terminal cancer doing on a dating app? I want what we all want, I guess. I want someone to enjoy spending time with. To tell me I look nice. Only it’s all for a much shorter time. I don’t expect someone to stay with me once I get really sick again. My last relationship made me feel like a burden. In actuality, he was lucky to be with me. I know that now.

I was (and still am) also afraid of something working out and hurting someone else. It feels selfish. But when I like someone, I’m all in. People probably think it’s because of the cancer, but I’ve always been like this, since my very first date at 14 on July 4, 1992, when I sat in a wooded clearing on my first boyfriend’s four-wheeler watching fireworks from nearby SeaWorld.

I had to get home but didn’t want to leave without my first kiss. When we wished on a shooting star, I had the opening I needed. “Do you know what I’ve wanted to do all year?” I said, referring to the crush I’d had on him ever since he entered my freshman English class the first day of ninth grade wearing a Guns ’n’ Roses T-shirt.

“Kiss you,” I said. Then we kissed under the fireworks.

When someone recently texted to see what I wanted to do on our next date, I replied, “I hope this isn’t too forward, but one thing I would like to do is kiss you someplace that isn’t a rainy street corner.” Apparently, I am still the same person I was when I was 14.

Cancer left me with scars, radiation tattoos and a Mediport, but the bad relationship left me with scars I sometimes fail to see. I apologize too profusely, like when I knocked a date’s napkin off the table. “It’s O.K.,” he said, looking at me quizzically. “I’m not going to yell at you.” I realized I had been waiting for him to scold me, like my ex would have.

The guy who made me break some of my rules made me shatter more. I found myself, at his insistence, reluctantly and badly dancing, but laughing the entire time. I’ve held his hand across restaurant tables. I steal kisses from him in public. Sometimes I don’t recognize myself anymore.

I’m so happy and so sad at the same time.

Death isn’t an abstract concept. I live week to week, moment to moment. I live fully, but I have always done that. Since the new treatment, I can even walk around sometimes not thinking about cancer. I agree with my ex: It’s nice. Since that first 1992 date, I just wanted to find someone and feel like that part of my life was settled. But from ages 28 to 40, I just settled. Period.

When my ex kissed me goodbye on the day we broke up, I thought, “This will be the last time a man kisses me.”

It finally feels good to be wrong about something.