Our Perceptions vs. Reality 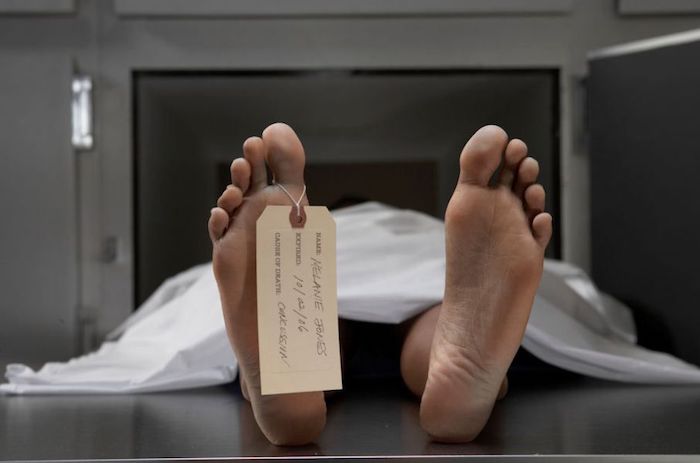 by Jennifer Thomas and Juli Fraga

Death, as the old adage goes, is one of only two certainties in life (the second being taxes).

But when it comes to what actually kills us, are we really correct in our assumptions? As it turns out, no.

Recent data gathered by UCSD students that looks at the biggest causes of mortality shows we might be worrying about the wrong things — partially as a result of what we see covered the most in the media. 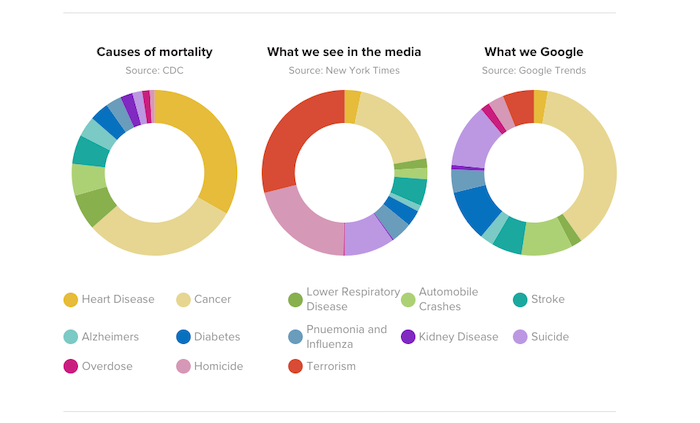 This particular data set looks at 10 of the leading causes of death, including three causes of mortality that receive substantial media attention.

Many of us have false expectations about death. There’s a sizeable discrepancy between how people think we die and how we actually die.

So how does this false vision of death impact us? How far from reality are we? What are the real numbers behind the causes of death — and what do they actually tell us?

The answers and the data may well lead you to a proactive (and preventive) healthcare approach.

The data shows that what the media is covering in terms of what kills us doesn’t always accurately represent the truth. And this can do more harm than good.

When people hear these things, they take them to heart.

The result: Anxiety and fear can spike, resulting in avoidance behaviors that impact a person’s well-being. Even worse, people living with mental health conditions, such as depression, anxiety, and post-traumatic stress disorder may be triggered by media reports, which can worsen their symptoms.

When inaccurate news becomes widespread, it leads people to believe danger exists where it may not. Like a game of telephone, this false information can get twisted and create a larger problem that doesn’t truly exist.

There’s also the issue of people’s expectations about death that are affected by the media focusing more on the things less likely to kill us.

Thinking about our own end of life — or death — at all can be uncomfortable. But it can also be extremely beneficial.

Dr. Jessica Zitter, an ICU and palliative care physician explains it this way: “Understanding the typical trajectories that are usually seen as people approach the end of life can be very helpful because if people know what final exit paths tend to look like, they are more likely to be prepared for their own as it approaches.”

Zitter goes on to say: “The media tends to ignore death from disease, while death from suicide, terrorism, and accidents are atypical in reality [based on the statistics] but sensationalized in the media. When death is treated in an unrealistic way, we rob people of the opportunity to attend to disease and make plans for the death that they would want to have.”

“You cannot have a good death if you don’t believe you are going to die. When the media misdirects our attention from death by disease to death from sensationalized causes, it implies that death can be avoided if these extreme circumstances can be avoided,” she says.

You can learn more about Dr. Zitter’s work in her book, Extreme Measures.

So what does that data say?

While heart disease and cancer together make up more than halfTrusted Source of all causes of death in the United States, these two health conditions are less than a quarter of what’s covered by the media.

So while these two conditions make up a large portion of what kills us, it’s not necessarily being covered in the news.

On the other side of the spectrum, terrorism accounts for less than 0.1 percent of deaths, despite the fact that it makes up 31 percent of news coverage. In fact, it’s overrepresented by a whopping 3,900 times.

Meanwhile, though terrorism, cancer, and homicides are the causes of death that are most mentioned in newspapers, only one is actually in the top three causes of mortality.

Furthermore, homicide is more than 30 times overrepresented in the media, but only accounts for 1 percent of total deaths.

Our concerns drastically differ from the facts

As it turns out, the causes we worry about killing us — demonstrated by what we Google the most — aren’t often in line with what actually ails Americans.

What’s more, Googling symptoms or potential things that can kill us without also discussing these things with a doctor can cause anxiety to arise. This can, in turn, set off a stream of unwarranted ‘what if’s’ such as “What if such and such happens?” “What if I’m not prepared?” or “What if I die and leave my family behind?”

And these unsettling thoughts can catapult your nervous system into overdrive, igniting the body’s stress response, also known as “fight or flight.” When the body enters this state, the heart beats faster, breathing becomes more shallow, and the stomach churns.

Not only is this physically uncomfortable, but it can also impact your physical health by raising blood pressure, heart rate, and lowering immune system functioning.

Now, back to the data…

It would seem that while we should be focusing on heart disease — which is responsible for 31 percent of deaths — it’s only 3 percent of what people search for on Google.

Conversely, searches for cancer are disproportionate to the actual likelihood of getting the disease. While cancer does make up a large portion of deaths — 28 percent — it accounts for 38 percent of what’s searched on Google.

Diabetes, too, shows up in Google results (10 percent) far more than it causes death (3 percent of total deaths).

Meanwhile, suicide has several times more relative share in the public’s eyes compared to the actual death rate. While only 2 percent of deaths in the United States are by suicide, it makes up 10 percent of what the media focuses on and 12 percent of what people search for on Google.

Despite the obvious disparities about what causes mortality versus reported causes of death, some of our perceptions actually are correct.

While it might not seem like a big deal to have a firm grasp on the realities of what causes us to die, there are definite psychological and physical benefits that come out of this awareness.

Understanding health risks and safety concerns can help us better prepare for unforeseen outcomes, which can feel empowering — like taking preventive measures for heart disease.

When you know about risk factors, you can also seek comfort from healthcare professionals who can answer questions and offer reassurance. For example, someone worried about cancer may receive additional health screens from their physician, which can help them take charge of their well-being.

So next time you find yourself worrying about a news report you’ve just read or a disease you only just learned about but are Googling at 3 in the morning, take a step back and consider whether you really need to be worrying.