[I]f your family doesn’t want your stuff when you’re alive, they sure won’t want it when you’re dead.

That’s the blunt assessment of yet another self-help author from abroad who is trying to get Americans, who have an addiction to collecting and storage units, to clean up their acts.

The latest volley in the decluttering business comes from Stockholm, where 80-ish artist Margareta Magnusson has just published a slim yet sage volume, “The Gentle Art of Swedish Death Cleaning.” The book will be published in the United States in January. 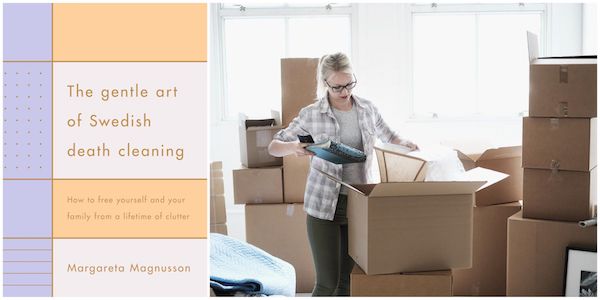 While Japanese item-control diva Marie Kondo gave us strict instructions to keep only things that spark joy, Magnusson’s book is straightforward and unsentimental (with a bit of humor). The main message from this mother of five is: Take responsibility for your items and don’t leave them as a burden for family and friends. It’s not fair. Magnusson says you can keep things that evoke good memories; there are no hard-and-fast rules such as folding your remaining T-shirts to stand upright in your drawers, as dictated by the KonMari method.

The concept of decluttering before you die, a process called “dostadning,” is part of Swedish culture. (It comes from the Swedish words for death and cleaning.) Karin Olofsdotter, 51, the Swedish ambassador to the United States, says her mother and father, who are in their 80s, are in the midst of it back home.

“My parents and their friends are death cleaning, and we all kind of joke about it,” Olofsdotter says. “It’s almost like a biological thing to do.” Olofsdotter says part of Swedish culture is living independently and never being a burden to anyone. How you keep your home is a statement of that.

Magnusson, who has moved 17 times, says women often end up doing the death cleaning. After her husband died, she had to declutter their house; it took her almost a year before she could downsize to a two-room apartment. She says that although it felt overwhelming, she is glad she did it herself, as her husband would have wanted to keep everything and her kids would have disagreed about what to keep and what to toss. This way, she made her own decisions. Now she continues to do it on a regular basis.

Magnusson suggests that age 65 is a good time to start death cleaning, but the process is freeing at any age.

A few of her tips: Don’t start with your photos, as you’ll get bogged down in your memories and never accomplish anything. Make sure you keep a book of passwords for your heirs. Give away nice things you don’t want as gifts, such as china or table linens or books, as opposed to buying new items. Keep a separate box of things that matter only to you, and label it to be tossed upon your death. It’s okay to keep a beloved stuffed animal or two.

Magnusson and one of her daughters filmed a video in which she talks about why she decluttered and how it’s not a sad process, but more of a relief. Her daughter asks whether her mom would help her begin death cleaning. They go to a storage locker overflowing with luggage and clothes and blankets topped by a garden gnome.

“Oh, my God. What are you going to do with all this crap?” her mother says in perfect English, taking a look around. They discuss how long it’s going to take.

“You are never ready with your death cleaning because you don’t know when you are going to die,” Magnusson says. “So it goes on and on.”

When you are dead, then it stops, they agree.