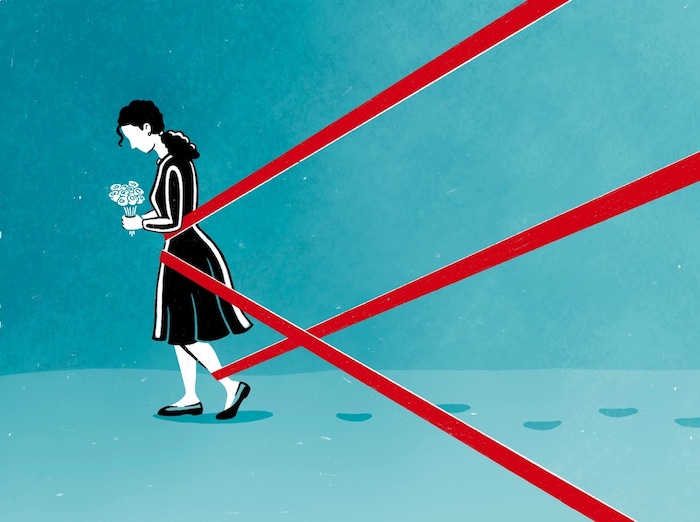 The last thing you want to deal with when you’re wrapped up in grief is red tape. It’s frustrating and exhausting and emotionally crushing. And yet it is unavoidable.

My family thought our financial affairs were organized. We had wills and beneficiaries were listed there and on all financial accounts. Many people don’t do that, which makes the post-death red tape so much worse. But even so, we’ve endured months of maddening experiences with banks, insurance companies, employers and the Social Security Administration — among others.

Here are a few of the most aggravating roadblocks:

Face recognition, voice recognition and fingerprint recognition speed up access when someone’s alive but present tremendous barriers for survivors trying to wind down accounts. When I sign in to my late husband Scott’s password manager and investment accounts, access codes are sent to his phone. Despite many tries, I find I cannot change that phone number. This means keeping Scott’s phone active, a needless expense.

If you think you and your spouse share a credit card, because each of you has a card with your name on it and the same account number, guess again. That card belongs only to the person who applied for the account. Credit card companies are alerted to a death quickly by the Social Security Administration, and will freeze a survivor’s ability to view the account online. Providing a paper statement seems logical, but our bank’s representative told me, “Once you’ve opted to get online statements, our policy is you cannot go back to paper statements.” It took six full months of begging to the bank’s “Deceased Management Team” (actual name) to be mailed statements for the months following Scott’s death. And it wasn’t easy to cancel some recurring charges.

At Best Buy, a customer service representative said I had to take a death certificate to a Best Buy store to cancel a Geek Squad subscription. I considered dressing in black with a veil but went dressed normally, with death certificate in hand, and got the refund.

When your frustration level rises after marathon sessions on hold, you might be tempted to visit the bank or insurance office in person. Don’t. At one bank, an employee would not make an address change when I arrived, and referred me to the financial institution’s website.

I visited a Social Security office in person twice to try to change the address where Scott’s post-death Medicare bills were sent since I had moved — and was now paying those bills. An address change could not be done in person after a death, I was told; use his online account. But it is the one account not in his password manager and it has a unique username I don’t know. I hope his medical bills, arriving at a snail’s pace, all come before the Postal Service stops forwarding his mail to our old address.

I bought multiple copies of Scott’s death certificate, but I was unprepared for how companies string out requests for other documents. Scott’s longtime employer clawed back his monthly pension without notification, then refused to tell me what documents it required other than the death certificate. The company needed to investigate Scott’s pension wishes, it said.

Still, she insisted on sending the three months of withheld pension payments to my old address, even though I had provided proof of my new address weeks earlier.

Expedia required a death certificate and 30 days to quit sending Scott emails. I couldn’t just unsubscribe him because he once had been booked on a flight through Expedia, the online travel agency’s fine print disclosed.

At our bank, I had to make one appointment with an official to delete Scott’s name from our joint checking and savings accounts, and another to change beneficiaries on that account. I was told to plan 90 minutes for the first visit. (It took two hours.)

Most of the time was spent sitting in the banker’s cubicle, waiting while he tried to get the bank’s estate management group to answer the phone. He waited on hold for 43 minutes while I sat there. Deleting Scott’s name took a few minutes. The banker hung up without asking about the credit card linked to that account and had to call back. We waited another 18 minutes for the phone to be answered.

My return appointment for the beneficiaries took another hour sitting in that cubicle.

Many of these red-tape problems are made more galling as they often require phone calls with endless waits on hold. When representatives finally connect, they invariably start by the rote and insincere “sorry for your loss” scripts.

Grief is hard enough. Dealing with tech barriers and nonsensical policies make the months after a death into a second career of aggravating phone calls, emails and visits.

How to reduce these irritations

To minimize these frustrations, here are a few suggestions learned the hard way:

1. Keep an updated list of recurring credit card charges, organized by each card.

2. Make sure you have a credit card you applied for in your name.

4. Buy at least six copies of the death certificate. Some companies allow you to email copies, but others require the physical certificate.

5. Do an inventory now and make sure you have birth and marriage certificates, adoption or divorce documents and Social Security cards. After many decades of marriage and multiple moves, some of these documents may have gotten lost. It can take weeks to get copies from the various agencies.

6. Don’t put the will or other important documents in a safe-deposit box. Getting access to it can be a lengthy process, particularly if your loved one misplaced the key. Even with a key, if family members suddenly need to get a loved one’s medical power of attorney outside of bank hours, for example, they are out of luck.