Susan D. Block, who has taught and researched doctor-patient communication and severe illness for decades, found herself on the other side of that relationship in the fall of 2018, which would transform her work, teaching, and practice. 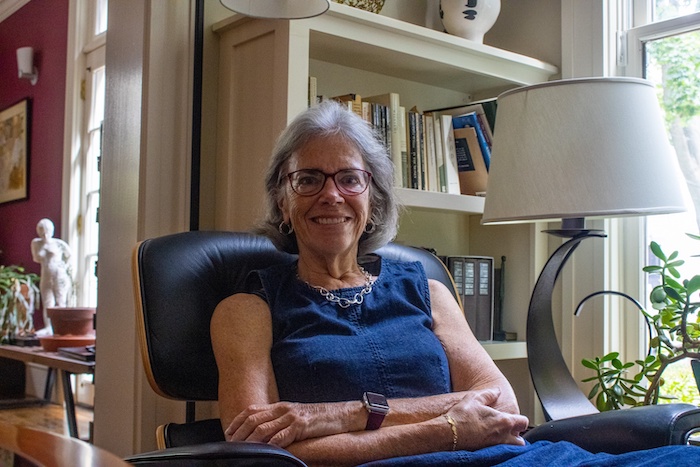 In the fall of 2018, three weeks into Susan D. Block’s first semester teaching a freshman seminar on death and illness — “The Heart of Medicine: Patients and Physicians and the Experience of Serious Illness” — she learned that she had a mass on her pancreas. In the worst way possible, her field of work and personal life had collided.

As the founding chair of the Dana-Farber Cancer Institute’s Department of Psychosocial Oncology and Palliative Care, Block, a psychiatrist, had spent almost 40 years treating patients with serious illnesses like cancer, trying to figure out how to make their last months more meaningful and less frightening. Now she found herself in the patient’s chair.

Block had been undergoing routine tests for pancreatic cancer as part of a research study for over a decade, due to a strong family history of the disease. Luckily, her preliminary screenings caught what seemed to be cancer at a relatively early stage. “People were looking for it and then they finally found it,” she says. “It was terrifying.”

That terror lasted for about three weeks, as Block prepared for a surgery to remove most of her pancreas. When she finally went into surgery, however, her doctors discovered that, against all odds, she had been misdiagnosed. The mass was the result of an autoimmune disease.

“People had told me that there’s a 95 percent chance that it’s cancer. I wish to be in the 5 percent, but I don’t ever assume that I am,” she says. “It was wonderful, amazing, incredible good news.”

Even after recovering, Block’s brush with cancer would touch all aspects of her life — her attitude toward work, her presence in the classroom, and her conversations with her own patients.

Block’s lifelong interest in the social and emotional aspects of serious disease began during her internal medicine residency program at Beth Israel Hospital in Boston, where she found herself gripped by “how poorly we cared for people who were at the end of their lives.” Drawn to understand her patients’ psychological experiences, she ended up completing a residency in psychiatry as well.

At the time, Block says, “there was no field of palliative care, and there was barely a field of psycho-oncology” — the study of the social and psychological dimensions of cancer. “There was sort of no way to go forward.”

If Block couldn’t follow traditional paths to change the way medical institutions supported critically ill patients, she was determined to forge a path herself. In 1998, she started a new job at Dana-Farber with a substantial mission: to build a psycho-oncology and palliative care program from scratch.

By the time Block landed in the operating room herself, she was a leader in her field. But even after 40 years of teaching about severe illness care and doctor-patient communication, when she found herself on the opposite side of that relationship, Block discovered that some things could still surprise her.

“The one really bad part of my care was being in the hospital after the surgery,” she remembers. Struggling to recover from the operation, Block shared a two-bed hospital room with another woman. “I had to crawl over her to get into the bathroom,” she says. “It was so cramped, and so small.”

At night, after her crowd of visitors had left, the woman began sobbing, and Block’s instincts as a physician kicked in.

“There I was, half doped-up still from the anesthetic, I was trying to comfort her,” Block says. “How can you not respond to somebody who’s that vulnerable?”

In that hospital room, she also saw another, uglier side of the health care system up close. “[The woman] felt like the nurses weren’t taking good care of her because she was Black,” Block says. “Because [nurses] put on their best behavior when the doctor comes in the room. I’d never seen that kind of dismissive, seemingly racially-driven behavior, as I saw from nurses.”

Back home from the hospital, readjusting to normal life after the surgery brought its own set of challenges.

“​​I had a pretty hard recovery,” Block says. “And I thought a lot about how much stress was safe to put my body under.” This was especially challenging after decades of juggling a fast-paced career of clinical work, field-building, teaching, heading departments, and research.

Three years before, she had been by her husband Andy’s side through his own struggle with and, ultimately, death from an aggressive lymphoma. The pain of that experience instilled in her a philosophy of “do it now,” and in the wake of her own treatment, she’s focused on putting it into practice.

She built her own house in western Massachusetts — something she’d always wanted to do. She gave herself permission to cut back on the parts of her career that drained her energy, and focus on teaching and seeing patients instead. When she met a new partner, she allowed herself to find love again.

“I’ve been really lucky in terms of my material circumstances, and I have just wonderful people in my life,” she says. And, of course, she feels lucky to be back in the classroom, teaching undergraduates.

Leaving her seminar three years ago was bittersweet — she didn’t want to stop teaching, but she knew her experience with illness would be an arduous one.

“I felt this obligation to the students,” she says, “but it was really clear that I couldn’t teach a class on serious illness, death, and dying, while I was in the middle of this very terrifying personal experience.”

Her class focuses on encouraging difficult discussions about health; she often brings in speakers ranging from doctors to chaplains to seriously ill patients. At the beginning of the semester, she asks students to fill out a survey about their own attitudes toward death, and for freshman family weekend, she asks them to interview a family member about their goals for end-of-life care.

“I love the idea of trying to teach about this very difficult topic to younger people who hadn’t had the kind of indoctrination or socialization into either the pre-med world or the medical culture,” Block says.

At the end of fall 2018, she returned to the seminar class she had to leave behind when she began her treatment and told them her story.

“They didn’t really know me that well, but it was still sort of a traumatizing, discombobulating, upsetting experience for the students,” she says. She believed sharing her story would serve as a valuable learning opportunity. “I don’t like the word closure that much, but it brought things full circle in a way.”

This semester, Block is teaching “The Heart of Medicine” for the third time. The seminar looks different today than it did in the fall of 2018, but not necessarily because of her own harrowing diagnosis. She’s modified the course to incorporate a discussion of Covid-19, and to focus more on health inequities. She says she doesn’t go out of her way to bring up her story, although she does touch on it when the class opens up about personal experiences with death.

“I want them to name their experiences. So I can’t just stand behind a sort of wall of neutrality and pretend I don’t have relevant experiences,” Block says. “That would not feel right, as a teacher.”