THREE and a half years ago, on my 62nd birthday, doctors discovered a mass on my pancreas. It turned out to be Stage 3 pancreatic cancer. I was told I would be dead in four to six months. Today I am in that rare coterie of people who have survived this long with the disease. But I did not foresee that after having dedicated myself for 40 years to a life of the law, including more than two decades as a New York State judge, my quest for ameliorative and palliative care would lead me to marijuana. 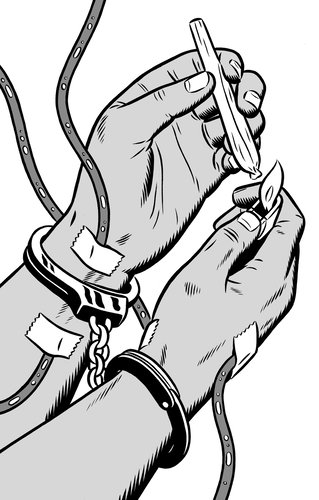 My survival has demanded an enormous price, including months of chemotherapy, radiation hell and brutal surgery. For about a year, my cancer disappeared, only to return. About a month ago, I started a new and even more debilitating course of treatment. Every other week, after receiving an IV booster of chemotherapy drugs that takes three hours, I wear a pump that slowly injects more of the drugs over the next 48 hours.

Nausea and pain are constant companions. One struggles to eat enough to stave off the dramatic weight loss that is part of this disease. Eating, one of the great pleasures of life, has now become a daily battle, with each forkful a small victory. Every drug prescribed to treat one problem leads to one or two more drugs to offset its side effects. Pain medication leads to loss of appetite and constipation. Anti-nausea medication raises glucose levels, a serious problem for me with my pancreas so compromised. Sleep, which might bring respite from the miseries of the day, becomes increasingly elusive.

Inhaled marijuana is the only medicine that gives me some relief from nausea, stimulates my appetite, and makes it easier to fall asleep. The oral synthetic substitute, Marinol, prescribed by my doctors, was useless. Rather than watch the agony of my suffering, friends have chosen, at some personal risk, to provide the substance. I find a few puffs of marijuana before dinner gives me ammunition in the battle to eat. A few more puffs at bedtime permits desperately needed sleep.

This is not a law-and-order issue; it is a medical and a human rights issue. Being treated at Memorial Sloan Kettering Cancer Center, I am receiving the absolute gold standard of medical care. But doctors cannot be expected to do what the law prohibits, even when they know it is in the best interests of their patients. When palliative care is understood as a fundamental human and medical right, marijuana for medical use should be beyond controversy.

Sixteen states already permit the legitimate clinical use of marijuana, including our neighbor New Jersey, and Connecticut is on the cusp of becoming No. 17. The New York State Legislature is now debating a bill to recognize marijuana as an effective and legitimate medicinal substance and establish a lawful framework for its use. The Assembly has passed such bills before, but they went nowhere in the State Senate. This year I hope that the outcome will be different. Cancer is a nonpartisan disease, so ubiquitous that it’s impossible to imagine that there are legislators whose families have not also been touched by this scourge. It is to help all who have been affected by cancer, and those who will come after, that I now speak.

Given my position as a sitting judge still hearing cases, well-meaning friends question the wisdom of my coming out on this issue. But I recognize that fellow cancer sufferers may be unable, for a host of reasons, to give voice to our plight. It is another heartbreaking aporia in the world of cancer that the one drug that gives relief without deleterious side effects remains classified as a narcotic with no medicinal value.

Because criminalizing an effective medical technique affects the fair administration of justice, I feel obliged to speak out as both a judge and a cancer patient suffering with a fatal disease. I implore the governor and the Legislature of New York, always considered a leader among states, to join the forward and humane thinking of 16 other states and pass the medical marijuana bill this year. Medical science has not yet found a cure, but it is barbaric to deny us access to one substance that has proved to ameliorate our suffering.