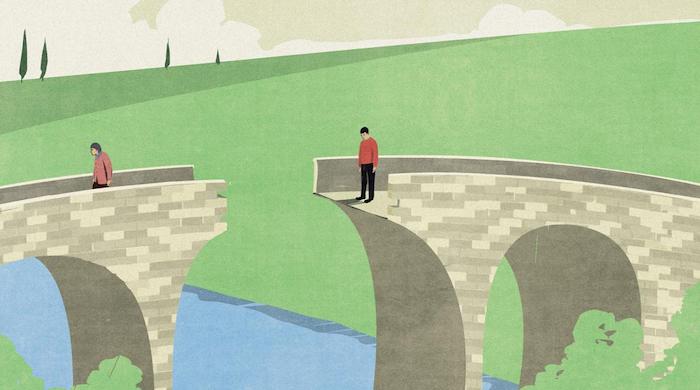 A new illustrated book, How to Die Well, teaches us how to practically and emotionally prepare for death

Death can be a difficult topic to discuss, and despite its inevitability we can be left feeling surprised or unprepared when confronted with it. A new book, How to Die Well, aims to change this by looking at the four stages of death, from ‘Before you Go’ and ‘Your Funeral’, to ‘Saying Goodbye’ and ‘Good Grief’.

The book, produced by life insurance company Royal London and creative agency Rankin, explores these processes through illustrations by Italian-born, Denmark-based artist, Andrea Ucini. Ucini’s understated style makes a poignant foil for the complexity of the subject matter, with his neat images drawing everyday scenes in simple linework. The muted colour palette and pure form gently subvert the mundane, with the prosaic nature of his portraits lending acceptance to death’s role in life.

In Saying Goodbye, a couple are divided by a fractured bridge. In Pets and Death, a dog rests behind his owner’s unworn coat and boots which dress an invisible profile. In Before You Go, a couple pause a bike ride to hold each other. Your Funeral depicts a solitary pianist returning to the stage for his final bow, Good Grief a woman embracing emptiness.

The illustrations are a complement to the book which, alongside practical advice from settling estates to writing a will and saying the final goodbyes, offers personal essays; including from photographer Rankin who reflects on his parents’ death. It looks into often stressful issues including palliative care, funeral poverty and assisted dying in a bid to open the conversation around death. §

Artist Support Pledge one year on: is it here to stay?

There has been one year of #artistsupportpledge, the Instagram initiative that brought income to artists in times of turbulence, and art to collectors at accessible prices. We caught up with founder, artist Matthew Burrows to find out how ASP turned from short term solution to global movement.

One year ago, art galleries had shuttered their doors, revenue streams for artists were evaporating, and the art world began a sustained physical hiatus. Amid this tsunami of uncertainty, a hashtag began taking Instagram by storm.

The Artist Support Pledge (#artistsupportpledge) presented an opportunity for artists to sell their work directly via the social media platform. Though simple, this artist-to-patron, artist-to-artist formula, proved revolutionary. To recap, each time an artist makes £1,000 in sales, they commit 20 per cent of their earnings to purchasing another artist’s work. The rules are not enforced; this is a principle built on trust and generosity, and one year on, the initiative has cast a positive light on the human condition. ‘ASP has proven that the vast majority are only too willing to give generosity a go,’ says Matthew Burrows, Sussex-based artist and founder of Artist Support Pledge. ‘It has fundamentally changed my view on what is possible.’

Artist Support Pledge, now a non-profit company, was conceived as an open, democratic marketplace based on a sustainable ‘micro-culture and economy’, as opposed to one of aggressive growth. Initially, it was to tide artists over until a three month isolation period lapsed, but as we now know things escalated. ‘Artist Support Pledge was set up as an emergency response to a desperate situation and has evolved into a new cultural economy formed out of a simple idea, who could have imagined that?’ Burrows explains.

‘Sharing economies are at the forefront of economic thinking so it’s prescient that ASP’s impact has caught on. Fundamentally ASP is a movement which operates through cultural values, for the good of the many and not merely the few.’ This is not exactly a new concept; human beings thrived in societies based on similar principles for hundreds of thousands of years pre-industrialisation. As Burrows adds, ‘using digital media to create community-focused economies is the only new part.’

In another major recent development, the initiative has welcomed a-n (The Artists Information Company), the UK’s largest artists’ membership organisation, on board as a supporting partner. ‘It’s a natural match, we are both committed to nurturing and supporting the lives of artists,’ Burrows explains. ‘a-n have been doing it for years and are well set up to support ASP’s ambitions.

It’s also been a year Burrows is unlikely to forget personally; he was made an MBE in The Queen’s birthday honours list, was named Apollo’s Personality of the Year, and was listed among the ArtReview Power 100. ‘I get messages, letters and gifts almost every day from artists, from all over the world, expressing their gratitude. It can be overwhelming’ he says. ‘Some are just happy they have sold a few pieces, others are making a very good living paying rent and feeding their families. Then there are the buyers, who for the first time, feel like they have the opportunity to purchase art, without having to be super-rich.’

One year on, galleries and art spaces around the world are gradually showing signs of emerging from hibernation, but ASP is proving to be far from redundant. ‘There are just too many people living off ASP right now for it to stop.’ says Burrows, who will continue supporting artists in an ever-shifting landscape. He aims to ‘build bridges’ with commercial and public galleries, as well as educational institutions, but for that, he’ll require staff, and ergo funding.

So where will Artist’s Support Pledge be one year from now? Burrows’ goals are characteristically ambitious, but if the initiative’s track record is anything to go by, not unattainable. ‘I hope that ASP will have a team maintaining and developing a vibrant cultural initiative and economy, borne out of crisis into a new order of cooperation and interdependence.’ §