With restrained camera work, “Departing Gesture” shows the process of a solitary funeral and burial, tended to by funeral-home staff. 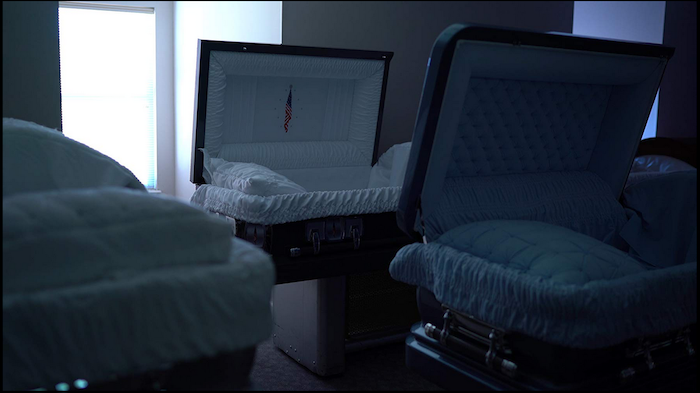 Jonathan Napolitano and Brian Bolster’s eleven-minute documentary “Departing Gesture” opens inside a suburban-style funeral home, with a long shot of a visitation room, where a white-haired man in a red necktie appears to be setting up for a wake. The casket is open, the flower arrangements generous and autumnal. The only people we see are the man in the coffin and the man taking care of him. “It happens more than you think,” a man’s says, in a voice-over. “Maybe ten or twelve deaths a year, I think, where their family would abandon them and never come back.” The film gives us a minute to contemplate this—the screen goes dark and shows a title card, and then the camera lingers on an exterior shot of the tidy funeral home. Who would abandon their late relatives, and why?

“Departing Gesture,” the first film in The New Yorker’s new series highlighting short documentaries, sheds light on this story patiently and with care. It focusses on the Sebrell Funeral Home, in Ridgeland, Mississippi, whose director, Trey Sebrell, is the person we have just heard speaking. Bolster’s camera observes the funeral home, both its public-facing rooms and its behind-the-scenes areas—offices, an embalming room—as we listen to Sebrell talk. “It’s one of those professions that, once you’re involved, you feel like you’re serving,” he says. “Even if I did not love working for myself, I still would be a funeral director and an embalmer at another funeral home in Mississippi.” As Sebrell goes about his work, in a suit and cufflinks, his movements have a calm certitude.

Sebrell Funeral Home has a partnership with a local charity, Grace House, which provides care and housing for people with H.I.V./AIDS; Sebrell cares for its dead, some of whom are ultimately abandoned by the family members who survive them. These families don’t hold a service and don’t want their relative’s remains. In the film, we watch the process of a solitary funeral, of sorts, and a burial, tended to by funeral-home staff.

Many of us have been in funeral homes like Sebrell’s and have attended memorials of various sizes—the wakes that teem with mourners, the calling hours that feel underpopulated. Either circumstance can enhance the sad surreality of death; in this case, the sadness is heightened further still. Bolster’s camera remains static, at a respectful distance, as it watches people at work: a man with flowers, a woman tending to the deceased’s makeup, pallbearers bringing the casket to the hearse. Other shots show us caskets, a lectern, the embalming room and its tools, embroidered seat covers that say “pallbearers.” The restrained camerawork subtly heightens the contrast between life and death, movement and stillness.

Bolster and Napolitano met on the film-festival circuit and have worked together on several projects; for “Departing Gesture,” Bolster shot and Napolitano edited. They met Sebrell in the course of working on a feature, still in development, about H.I.V./AIDS in the American South. The South has become the epicenter of the crisis in the United States, owing to factors including poverty, cuts to health-care funding, and social stigma. And H.I.V. infection in rural areas and smaller cities is on the rise. “I’m very interested in issues of regret,” Bolster told me. As a boy growing up in Massachusetts in the eighties, knowing that he was gay, Bolster watched reports of the unfolding AIDS crisis and the ignorance and fear that surrounded it. “Families abandoned their kids in hospitals,” he said. “I thought, This is what’s going to happen to me.” In 2019, an era of PrEP, undetectable H.I.V. viral loads in well-cared-for patients, and nationwide marriage equality, it can be stunning to see and hear about present-day ignorance that reminds us of decades past—for example, when Sebrell mentions a local funeral home that refused to collect a man’s body after learning that he was gay. “Departing Gesture” gives us a window into such stories with compassion, through Sebrell’s empathy and its own.

Watch this video on The Scene.