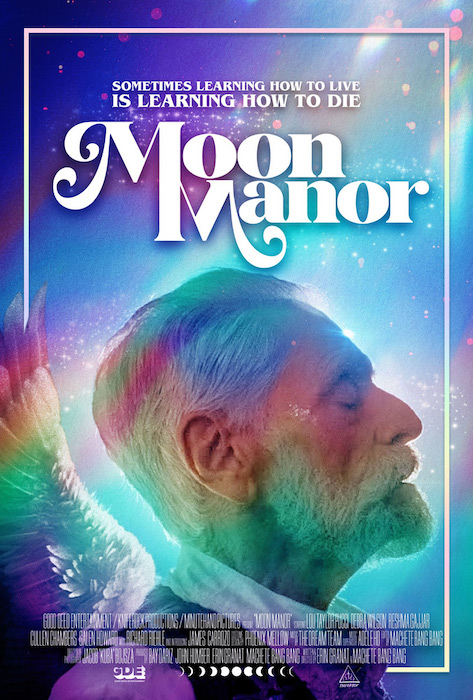 “If I can’t be me – and I mean everything that that means – I just don’t want to be.” Good Deed Ent. has revealed an official trailer for Moon Manor, a “comedy about death” made by the filmmaking duo known as “KnifeRock” (Erin Granat & Elizabeth Brissenden). This first premiered last year at a festival, and will be dropping on VOD starting in March to watch. Today is Jimmy’s last day alive. His Alzheimer’s is worsening, so he’s decided to die like he has lived – with intention, humor, and zest. In his last day on Earth, Jimmy will show an obituary writer, his death doula, his estranged brother, his caretaker, a surreal being, and guests at his fabulous “FUN-eral”, that perhaps the art of living is the art of dying. It’s “inspired by a true-ish story.” The film also marks the first original score by Coldplay producers The Dream Team. Moon Manor stars Jim Carrozo as Jimmy, with Debra Wilson, Richard Riehle, Lou Taylor Pucci, Reshma Gajjar, Galen Howard, Ricki Lake, and Heather Morris. Looks so wacky and fun and clever and fresh! I dig it.

Sometimes learning how to live, is learning how to die. On his last day alive, Jimmy (Jim Carrozo) will show his estranged brother, a salt-of-the-earth caretaker, sharp-witted death doula, an obituary writer, a cosmic being, and the guests at his FUNeral that sometimes the art of living just may be the art of dying. An exploration of what it means to have a “good death” and inspired by the life stories of 84-year-old lead actor James Carrozo. Moon Manor is co-written and co-directed by filmmakers Erin Granat & Machete Bang Bang (aka Elizabeth Brissenden – director on the series “I.R.L.”), collectively known as “KnifeRock”, both making their feature directorial debut after a few short films previously. Produced by John Humber, Bay Dariz, Erin Granat & Machete Bang Bang. Featuring a score by Coldplay producers The Dream Team. This first premiered at the 2021 Atlanta Film & Video Festival last year. Good Deed will debut Moon Manor in select US theaters + on VOD starting March 11th, 2022 coming up soon. Drop by the film’s official site.