Tasked today with confirming and certifying deaths resulting from unnatural or unknown causes, coroners were officially introduced in England in 1194, primarily for the purpose of collecting taxes. But their early records of deaths that occurred in unusual or suspicious circumstances offer an incredible insight into daily life, attitudes and living conditions in the Middle Ages that we would not otherwise be privy to…

Here, Janine Bryant from the University of Birmingham, who has researched medieval coroners’ rolls of three English counties – Warwickshire, London and Bedfordshire – reveals some of the most intriguing causes of death… 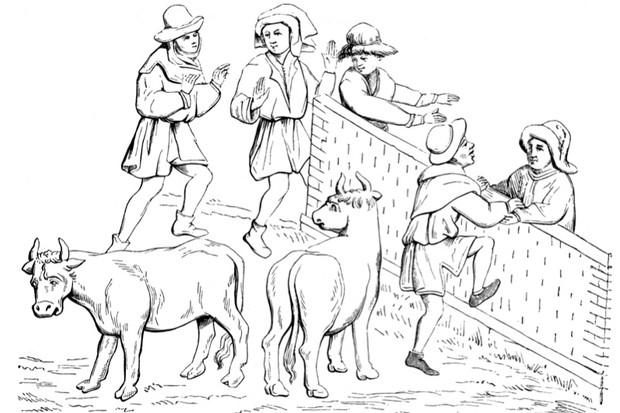 Animals were responsible for numerous deaths in the medieval period.At Sherborne, Warwickshire in October 1394, a pig belonging to William Waller bit Robert Baron on the left elbow, causing his immediate death. Similarly, in London in May 1322 a sow wandered into a shop and mortally bit the head of one-month-old Johanna, daughter of Bernard de Irlaunde, who had been left alone in her cradle “at length”.

Cows appear to have been somewhat difficult to manage in the Middle Ages, and caused several deaths, including that of Henry Fremon at Amington, Warwickshire in July 1365. He was leading a calf next to water when it tossed him in and he drowned.

People of all ages fell into wells, pits, ditches and rivers, and the coroners’ rolls of Warwickshire, London and Bedfordshire all record that drowning was responsible for the largest percentage of accidental deaths.

In August 1389 at Coventry, Johanna, daughter of John Appulton, was drawing water when she fell into the well. The incident was witnessed by a servant who ran to her aid, but while helping her fell in also. This was overheard by a third person who also went to their aid – he too fell in, and all three subsequently drowned. 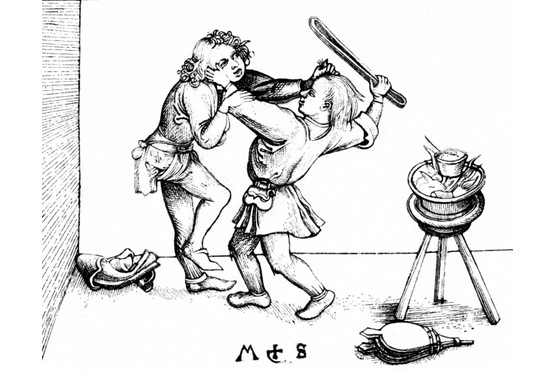 While there are some regional and gender differences, approximately half of the entries in the medieval coroners’ rolls record violent deaths that occurred both within and outside of the home.

One domestic incident occurred at Houghton Regis, Bedfordshire in August 1276, when John Clarice was lying in bed with his wife, Joan, at the hour of midnight. “Madness took possession of him, and Joan, thinking he was seized by death, took a small scythe and cut his throat. She also took a bill-hook and struck him on the right side of the head so that his brain flowed forth and he immediately died”. Joan fled, seeking sanctuary in the local church, and later abjured the realm [swore an oath to leave the country forever].

Others deaths occurred in more mysterious circumstances: in Alvecote, Warwickshire in April 1366, Matilda, the daughter of John de Sheyle, was crossing some woods when she discovered an unknown teenage boy who had been feloniously killed and was found to have multiple wounds.

The rolls record that deaths frequently arose from disputes, and thus many seem to have been unpremeditated acts. The weapon often appeared to have been whatever was at hand, such as the case of Thomas de Routhe who died at Coventry in May 1355 after he was hit on the head with a stone.

There are many accounts of people who fell to their death, and they did so in a variety of ways: at Coventry in January 1389, Agnes Scryvein stood on a stool to cut down a wall candle. She fell off, landed on the stand for a yarn-winder, and ailed for two hours before eventually dying of her injuries.

At Aston, Warwickshire in October 1387, Richard Dousyng fell when a branch of the tree he had climbed broke. He landed on the ground, breaking his back, and died shortly after.

A London case occurred in January 1325 at around midnight when “John Toly rose naked from his bed and stood at a window 30 feet high to relieve himself towards the High Street. He accidentally fell headlong to the pavement, crushing his neck and other members, and thereupon died about cock-crow”.

The coroners’ rolls show that the Middle Ages weren’t all doom and gloom, and that people did actually have fun – although it occasionally ended in disaster.

At Elstow, Bedfordshire in May 1276, Osbert le Wuayl, “who was drunk and disgustingly over-fed” was returning home. “When he arrived at his house he had the falling sickness, fell upon a stone on the right side of his head, breaking the whole of his head and died by misadventure”. He was discovered the following morning when Agnes Ade of Elstow opened his door.

In Bramcote, Warwickshire in August 1366, John Beauchamp and John Cook were wrestling “without any malice or considered ill-will”. In the course of their game John Cook was tossed to the ground and died the following day from the injuries he sustained.