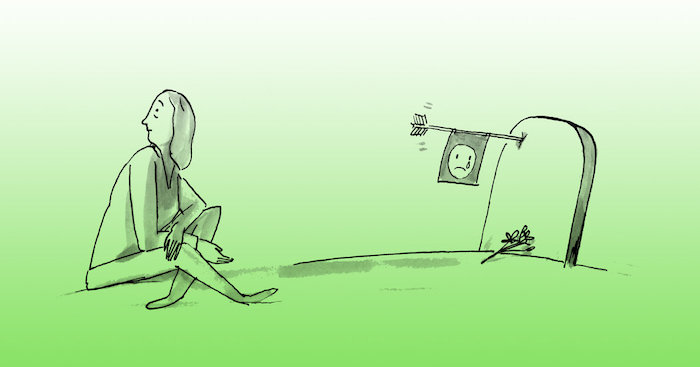 Do you laugh when someone’s grocery bag bursts? Do you find yourself stealing cabs? Have you shouted at puppies?

If you answered yes to any of these, then you may have Empathy Deficit Disorder.

For this Crowdwise, I asked you to recount some helpful things people said or did when you were in mourning — and to share some things that were decidedly unhelpful.

Your responses make it clear that Empathy Deficit Disorder (not a real condition, but maybe it should be) has reached epidemic proportions:

To be fair, knowing the right thing to say doesn’t come naturally. We’re neither born with that skill nor taught it. Our society generally avoids talking about death and grieving. Many of us haven’t had much experience with people in desperate emotional pain, so it’s not always obvious when we’re helping and when we’re hurting.

May the following pointers be your guide, brought to you by people who’ve been on the receiving end.
Rule 1: It’s not about you

Too many friends and acquaintances want to talk about how your loss affects them.

When Linda Sprinkle’s husband died, for example, she encountered many people who wanted to share their own grief stories. “They thought that it showed that they understood how I felt — but their grief is different from my grief,” she wrote. “I ended up dredging up emotional energy I didn’t have to comfort them.”

In her own mourning, Natalie Costanza-Chavez endured a parade of similarly self-focused remarks.

Ann Weber, a social psychologist who specializes in loss and grief, has identified another well-meaning but frustrating platitude, “Let me know if you need anything.”

“That suggestion seems like an innocuous promise,” Weber wrote, “but it’s often an exit line, just a way of escaping after the service or condolence call. And it puts the onus on the bereft person to be the one to ask for help.”

Rule 2: There is no bright side

You’ll hear many remarks that are intended to soothe you or lighten your mood. In principle, it’s a kind gesture. In reality, it’s never welcome.

When you’ve lost someone you love, you’re in a dark, raw place. Nothing anyone can say is going to cheer you up, especially observations that begin with the words, “At least.”

“At least she isn’t suffering,” was a particularly unhelpful line submitted by Beth Braker, who had to hear it. “At least you have other children,” recalled Margaret Gannon. “At least she didn’t die of AIDS,” remembered Jill Falzoi. “At least now you can have your own life,” Mary Otterson heard. (“I always had my own life,” she added. “Now I just have it without her in it.”)

And, from Emma St. Germain’s financial adviser, “At least you can move to another state now, with a more favorable tax environment.”

Crystal Hartley summed it up like this: “If you’re going to start off with ‘At least,’ just stop. It’s not going to be helpful. You’re trying to force them to look at the positive when they’re feeling terrible. Just acknowledge that the situation is bad enough exactly as it is, and validate their feelings.”

Humor, on the other hand, is tricky enough under the best of circumstances; when someone is in emotional agony, it can be excruciating. Don’t be the cousin who approached Frances Rozyskie at her father’s funeral to blurt out, “So! You’re an orphan now!”

Rule 3: Be careful with religion

Offering your beliefs about God and heaven to a nonreligious person can land with a thud, too. If the recipient doesn’t share your beliefs, you’re likely to add offense to the insensitivity.

When she learned that she had lost identical twins to a miscarriage, Donna Hires was devastated. “I ran into a friend who said words I will never forget, ‘Oh, I heard it was twins. I guess God didn’t think you could handle two at once.’ It took me years to forgive her.”

“In support groups for parents, ‘God never gives you more than you can handle’ is universally known as one of the cruelest comments for devastated parents to receive,” added Wendy Prentiss, whose 6-year-old nephew was diagnosed with a deadly cancer. “It suggests that the parents are weak for being crushed. It comes across as judgmental and tone deaf.”
Smarter Living

A weekly roundup of the best advice from The Times on living a better, smarter, more fulfilling life.

It also suggests, wrote Kathryn Janus, “that God had a hand in the death, and that’s just awful. And, P.S., sometimes the death is more than the bereaved can handle.”

Unless you’re certain that the bereaved shares your faith, then it’s best to avoid these remarks, passed along by readers like Nancy Field, Kathryn Janus and Kirsten Lynch: “She’s in a better place now,” “It was God’s plan,” “God wanted him up in heaven” or “You’ll see her again someday.”

One final bit of advice, “Don’t tell a grieving person how to feel. They may need to be vulnerable. They may need to cry for days on end,” wrote Kathryn Janus. In other words, don’t say things like, “Stay strong” or “Be strong.”

“I can’t tell you how liberating that was for me as I grieved,” she wrote. “There were times when many would think that I or my family should be somber, but we were howling with laughter. So it helps to be given permission for the feelings you have.”

What you can do, and should say instead

That list of what not to say includes many people’s go-to lines. So what should you say?

“If you knew the person, tell the mourner a story about that person — ideally in written format, because the family passes these around. There is no greater gift than a story about the loved one at the very moment it seems there will never be new stories,” Leslie Berlin wrote.

And if you didn’t know the person who died? Ms. Berlin suggests: “I didn’t know your [mom/dad/friend/sibling/child], but based on who you are, s/he must have been [nice adjective here].”

If you have only a moment to interact with the bereaved, like in passing or at a funeral, here are some of your best suggestions:

For Karen Hill, “‘I’m so sorry’ is still the simplest and best.”

Finally, if you really care, do something practical to help. Launch into action.

“There’s a huge range of support. A hug in that moment, bringing food, listening when the person needs to talk, checking in, reaching out during the holidays,” wrote Patrice Werner. “Just do something. You will feel worse in the long run if you do nothing.”

The key, advised Margaret Gannon, is, “Don’t offer, just do it. Show up with lunch (or dinner). Drop in and do my laundry. Take the kids out for a few hours. And most importantly, talk about the person who died. I don’t want him to be forgotten.”

Christy Goldfinch summed it all up in her recollections of her husband’s death two years ago at 57. “The main things I remember were lots of hugs, and ‘I am so sorry,’ and personal anecdotes about Frank’s intellect, his wit, his compassion, his skill,” she wrote.

“Oh, and one other very helpful thing, folks bringing barbecue and beer to the memorial. This was Texas, after all.”