A senior Vatican official has condemned the cult of Santa Muerte, or Holy Death, in Mexico as “blasphemous”. 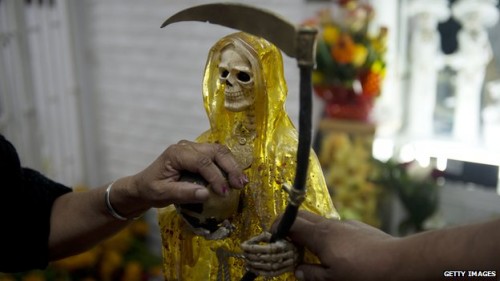 The president of the Vatican’s Pontifical Council for Culture, Cardinal Gianfranco Ravasi, said worshipping Santa Muerte was a “degeneration of religion”.

Cardinal Ravasi spoke at a series of events for believers and non-believers in Mexico City.

The cult, which reveres death, has been growing rapidly in Mexico.

It is represented by a cloaked female skeleton clutching a scythe.

It is particularly popular in areas of Mexico that have suffered from extreme violence carried out by the country’s drug cartels.

The cult is believed to date back to colonial times.

It merges indigenous beliefs with the tradition of venerating saints introduced by Christian missionaries after the Spanish conquest of Mexico.
‘Anti-religious’

Devotees pray to the saint at home-made altars and often offer votive candles, fruit and tequila in the hope Santa Muerte will grant their wishes.

Cardinal Ravasi said the practice was “anti-religious”. “Religion celebrates life, but here you have death,” he said.

“It’s not religion just because it’s dressed up like religion; it’s a blasphemy against religion”, he said.

The cardinal also referred to the fact that the cult is particularly popular among members of Mexico’s drug cartels and accused “criminals” of invoking it.

Cardinal Ravasi said a country like Mexico, where more than 70,000 people are estimated to have been killed in drug-related violence over the past six years, had to send out a clear message to its young generation.

“The mafia, drug trafficking and organised crime don’t have a religious aspect and have nothing to do with religion, even if they use the image of Santa Muerte,” he said.

There are no reliable figures showing how many people worship Santa Muerte, but academics studying the subject say more and more Santa Muerte shrines have been popping up in Mexico and the US, where the cult is popular with Mexican immigrants.

Last year, police in northern Mexico arrested eight people in connection with the killing of two boys and a woman in ritual sacrifices which prosecutors said were linked to the cult of Santa Muerte.

Be sure to check them out today!

Threshold Choir
is a network of
a cappella choirs of
primarily women’s voices:

a community
whose mission is
to sing for and with
those at the thresholds of life.