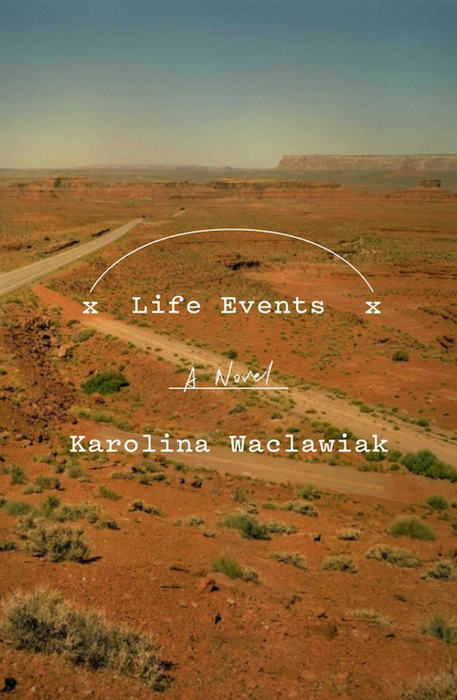 Do you know how to euthanize a bird? If not, you will just a few pages into “Life Events,” Karolina Waclawiak’s astute and distressing new novel.

Technically, euthanizing a bird isn’t that hard. All you need to do is make a concoction of simple syrup, a crushed anti-inflammatory pill and a crushed anti-anxiety pill, and administer it via an eyedropper. But as the protagonist, Evelyn, discovers, “the agony was in the waiting.” She has to sit by him for hours, watching him die after “dropping the mixture onto his tongue, hoping he would take the sip that would finally dull his pain.”

We meet Evelyn at 37, aimless, jobless, in the last stages of her dying marriage and consumed with grief over her parents’ impending death. It’s in this state that she notices a “hummingbird in distress” on the patio of her Los Angeles apartment, and resolves to put it out of its misery.

A few weeks later, Evelyn enrolls in a program for so-called death doulas, or people who come to patients’ homes to prepare them for euthanasia and be with them until the end. The narrative follows her training and then her work with three very different patients. Evelyn approaches the job with true devotion, but she fails at detachment — a requirement in this position. Evelyn is too present, too involved, too reckless — to the point of having to seek a Plan B pill after an encounter with one of the patients.

The job would’ve been unbearable if not for the alcohol and anti-anxiety pills that Evelyn takes to dull her own pain. Waclawiak accomplishes a brilliant feat here, creating an atmosphere of almost palpable, effortful dullness that presides over the entire novel. With so much opportunity for raw emotion, the author seems to avoid it at all cost, going for exceptional clarity instead.

In the absence of any real emotional attachment to the characters, the reader is forced instead to engage intellectually, to actually face the tough questions about our own inevitable death.

In the novel, the death doulas have to make sure that their patients make an informed decision rather than an emotional one; so as part of their training, they have to fill out the same questionnaires they give to their patients. In these passages the reader can’t help pausing and applying the questions to herself. One of the toughest questions asks what degree of livelihood constitutes a life worth living, on a scale from 100 percent (full health) to 0 percent (death). “By 60 percent, mobility was reduced and disease was significant,” Evelyn explains with clinical matter-of-factness. “Consciousness could waver between full, drowsy and confused.”

Imagining yourself functioning at 60 percent is scary enough, but it’s fully terrifying to think what will happen to you at 30 percent or below. An easier option would be to just keep your head in the sand and not think about death at all. And this is exactly what a majority of Americans are doing.

The health crisis we are living through has exposed many uncomfortable truths about our collective state of denial. Most people have reacted to the threat of Covid-19 as if this were the only possible cause of death, as if they’d never before fully considered their mortality. Tallying the pandemic’s daily fatalities with fanatical persistence, these individuals and public health officials are ignoring all the other deaths, praying for a vaccine that will allow them to finally relax, as if the prevention of one specific disease could render one immortal.

And even before Covid-19, our medical and cultural institutions would put so much effort into “defeating” death, which actually means prolonging life by just weeks or days at the cost of horrible suffering. Meanwhile, so little effort is put into helping patients accept their eventual death, effectively encouraging them to ignore mortality.

Waclawiak’s “Life Events” provides a powerful argument against that attitude. The novel offers you a hand, gently helping you pull your head out of the sand to accept the inevitable.