“Like many physicians, I’d never considered that there might be more to death than an enemy to be fought.” 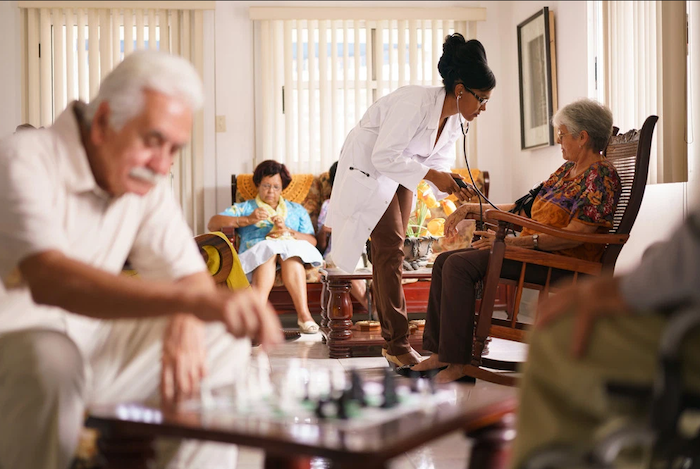 Tom was only forty when he arrived at Hospice Buffalo with end-stage AIDS. Unlike most of my patients, he was not surrounded by loved ones. Not a soul came to visit, ever. He was rather stoic, so I wondered if the absence of visitors was his choice rather than an indicator of his loneliness. Maybe that was his way of refusing to give death an audience.

I was puzzled but, wanting to respect his privacy, did not inquire. Tom’s emaciated body showed traces of once-chiseled muscles. He had kept fit and was still quite young, which gave me hope. In light of his age and physical conditioning, I thought that his body would be more likely to respond positively to life-prolonging treatment. Not long after he was admitted, I went to the nurse’s station and decreed, “I think we can buy Tom some time. IV antibiotics and fluids should do it.”

The charge nurse, Nancy, had been at Hospice Buffalo for much longer than I had. She knew her job, and everyone looked up to her. She was also not one to mince words. Still, her response took me by surprise: “Too late. He’s dying.”

She replied, “Yep. He’s been dreaming about his dead mother.” I chuckled awkwardly—equal parts disbelief and defensiveness. “I don’t remember that class from medical school,” I said.

Nancy did not miss a beat. “Son, you must have missed a lot of classes.”

I was a thirty-year-old cardiology fellow finishing my specialty training while working weekends at Hospice Buffalo to pay the bills. Nancy was an exceptional veteran nurse who had limited patience for young, idealistic doctors. She did what she always did when someone was out of their depth—she rolled her eyes.

I went about my business, mentally running through all the ways modern medicine could give Tom another few weeks or even months. He was riddled with infection, so we administered antibiotics. Because he was also severely dehydrated, I asked for a saline drip. I did all I could do as a doctor to prolong his life, but within forty-eight hours, Tom was dead.

Nancy had been right in her estimation of where he was on the downward slope. But how could she have known? Was it just pessimism, the numbing effect of having watched so many people die? Was she truly using a patient’s dream as a predictor of life-span? Nancy had worked in hospice for more than two decades. She was tuned in to aspects of dying I knew nothing about: its subjective dimensions. How patients experienced illness, particularly dying, had mostly been ignored throughout my training as a doctor.

Like many physicians, I’d never considered that there might be more to death than an enemy to be fought. I knew about blind intervention—doing everything possible to keep people conscious and breathing—but had little regard for the way any given individual might wish to die, or for the unavoidable truth that ultimately death is inevitable. Because it had not been part of my medical education, I failed to see how the subjective experience of dying could be relevant to my role as a doctor.

It was ultimately the remarkable incidence of pre-death dreams and visions among my dying patients that made me realize how significant a phenomenon this was, both at a clinical and a human level. As a hospice doctor, I have been at the bedsides of thousands of patients who, in the face of death, speak of love, meaning, and grace. They reveal that there is often hope beyond cure as they transition from a focus on treatment to notions of personal meaning. As illness advances, grace and grit collide and bring new insight to those dying and their loved ones, insight that is often paradoxically life-affirming. This experience includes pre-death dreams and visions that are manifestations of this time of integration and coming into oneself. These are powerful and stirring experiences that occur in the last days or hours of life and that constitute moments of genuine insight and vivid re-centering for patients. They often mark a clear transition from distress to acceptance, a sense of tranquility and wholeness for the dying. Patients consistently describe them as “more real than real,” and they are each as unique as the individual having them.

These end-of-life experiences are centered on personal histories, self-understanding, concrete relationships, and singular events. They are made of images and vignettes that emanate from each person’s life experiences rather than from abstract preoccupations with the great beyond. They are about a walk in the woods relived alongside a loving parent, car rides or fishing trips taken with close family members, or seemingly insignificant details such as the texture or color of a loved one’s dress, the feel of a horse’s velvety muzzle, or the rustling sound of a cottonwood’s shimmering leaves in the backyard of a childhood home. Long-lost loved ones come back to reassure; past wounds are healed; loose ends are tied; lifelong conflicts are revisited; forgiveness is achieved.

Doctors owe it to their patients to incorporate this awareness into our practice. End-of-life experiences ought to be recognized as evidence of the life-affirming and inspiring resilience of the human spirit that drives them. They are proof of humanity’s built-in, natural, and profoundly spiritual capacity for self-sustenance and self-healing, grace and hope. They help restore meaning at end of life and assist in reclaiming dying as a process in which patients have a say. They also benefit those left behind, the bereaved, who get relief from seeing their loved ones die with a sense of peace and closure.

This subjective experience of dying is also a powerful reminder that beauty and love in human existence often manifest themselves when we least expect it. The patients who summon up comforting processes at life’s end are beset by symptoms of a failing body over which they have limited control. They are at their most frail and vulnerable, existing within suffering states of aching bones and hunger for air. Catheters, IVs, and pills may now be part of their every day, sometimes literally functioning as extensions of their bodies under the daily medical management that is their new and irreversible lot. They may experience various degrees of cognitive, psychological, and spiritual dissonance. Yet even as the inexorable march of time is taking its toll on their bodies and minds, many also have pre-death dreams and visions in the context of which they display remarkable awareness and mental sharpness.

Herein truly lies the paradox of dying: patients are often emotionally and spiritually alive, even enlightened, despite a precipitous physical deterioration. The physical and psychological toll of dying may be undeniable, but it is also what makes the emotional and spiritual changes brought about by end-of-life experiences border on the miraculous. Doing justice to end-of-life experiences means accounting for this paradox, one in which death and dying transcend physical decline and sadness to include spiritual awakening, beauty, and grace. Or, as the title character in the acclaimed Tuesdays with Morrie puts it, “Aging is not just decay, you know. It’s growth. It’s more than the negative that you’re going to die.” This is also true of the dying process, which often functions as a summing up, culmination, and capstone, an opportunity to recognize and celebrate our humanity in all its complexity and dignity rather than just as an ending.