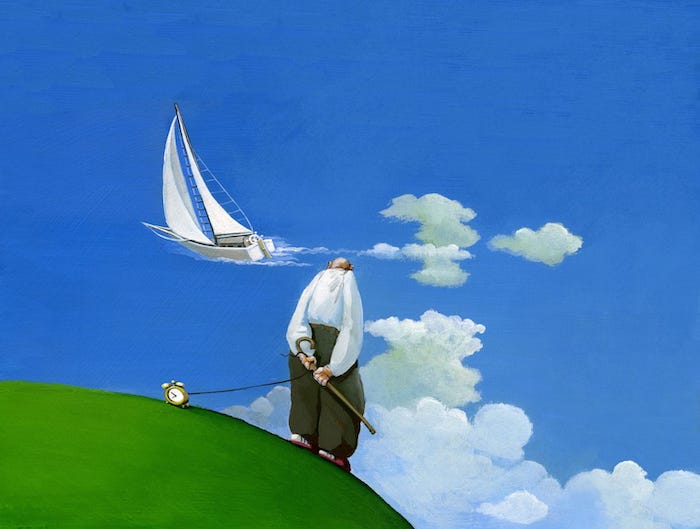 How should you live when you know you’re going to die?

It is perhaps the ultimate, eternal question — one we all have to grapple with, but mercifully, don’t have to, until the end is crystallized by our own illness or that of a loved one. Humans may be the only animal capable of grasping mortality, but it’s usually not something on our minds — until it is.

It’s a question I confront frequently as a physician caring for seriously ill patients. One morning some months ago, I met an older man with an aggressive cancer that had turned an avid runner into a voracious reader. He glanced up from his newspaper as I entered the hospital room.

“It’s [a] strange feeling, you know, reading about a world you’ll never get to see.”

After several rounds of chemotherapy — each more toxic than the last — he decided he had had enough. He could go long stretches without contemplating death, he said, until the sight of a far-off date or curiosity about some newly proposed legislation would bring into sharp focus the unavoidable reality: His days were limited.

“I mostly read biographies now,” he told me. “Reading about other lives helps me make sense of my own.”

I began to wonder whether the secret to a good death wasn’t looking forward, but peering backward — whether retrospective examination might be more therapeutic than prospective preparation. I thought of how often I’d focused solely on helping patients navigate the future: how many weeks or months of life they might expect, which procedures they should or shouldn’t consider. These discussions, while important, fail to address what research has revealed about the deeper wants and needs of seriously ill patients.

Nearly 20 years ago, a seminal study in the Journal of the American Medical Association explored what patients and doctors feel is most important at the end of life. Many responses were predictable and consistent across groups. Both doctors and patients, for example, thought it was important to maintain dignity, control pain and other symptoms, and have one’s financial affairs in order.

But where physicians and patients diverged is telling — and suggests both a missed opportunity and a path to progress.

Patients were far more likely to express that it was important to feel that their life was complete, to be at peace with God and to help others in some way.

In other words, to feel that their lives mattered.

A growing body of work suggests that a powerful but underused method of creating this sense of mattering is storytelling — reflecting on the past and creating a narrative of one’s life, what it has meant, who you’ve become and why.

Humans are natural story­tellers. We have tremendous power to frame a narrative. The same series of events — becoming a parent, getting a divorce, losing a loved one, finding a job — can be a tale of resilience and restoration or misfortune and regret. The process of bringing coherence to one’s life story is what psychologist Dan McAdams calls creating a “narrative identity.” People get better at identifying important life themes as they age, and those who are able to find the positive amid the negative are generally more satisfied with life.

Physicians are also storytellers by profession. But we’ve traditionally focused on narrating the course of disease instead of helping patients make sense of their lives with it. Creating opportunities for patients to reflect on life experiences, however, could offer an important avenue for healing — whether at the end of life or somewhere in the middle.

In a 2018 study, researchers assigned veterans with post-traumatic stress disorder to engage in either five 30-minute writing sessions in which they reflected on traumatic experiences, or a rigorous 12-week program of cognitive processing therapy (CPT), a first-line treatment for PTSD. The study found that the short writing sessions were just as effective at reducing PTSD symptoms as the resource-intensive CPT program.

Other work suggests that the particulars of storytelling matter. Simply looking back and listing life events doesn’t seem to help. It is the constructing of a narrative — exploring linkages, formulating a plotline — that’s critical for arriving at a coherent sense of self.

And even the pronouns seem to matter.

Using the first-, second- or third-person when reflecting on past experiences can each have strategic advantages. Using the third-person, for example, seems to allow us to better appreciate how we’ve changed over time, while the first-person primes us to look for continuity. Reflecting on challenges by using the generic “you” — “you win some, you lose some” or “what can you do?” — can help create psychological distance from a tough situation and universalize the experience. “I” makes the focus your response; “you” tethers it to the human condition.

When the future is running out, can we make more of the past? I often struggle with my role as a caregiver for patients at the end of life. I know the most healing things I can offer aren’t the things I usually do: pain medications, laxatives, intravenous fluids. Rather, they are at once more challenging and more elementary. To sit. To listen. To explore what it’s all meant.

“I tell myself,” my patient said. “Even if I won’t be around to see it, I helped shape the world of the future. At least my little part of it.”