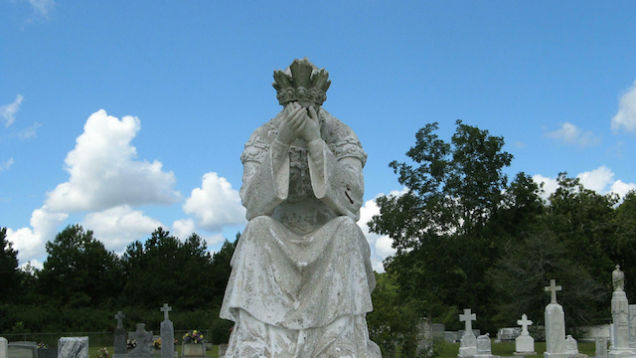 Grief and A Tale of Two Deaths

My maternal grandfather got cancer in the ’80s, when it was a virtual death sentence. My family never discussed it. It was especially hard on my mother, who took the stress out on the children. To this day, she does not like Halloween (when he was diagnosed), Thanksgiving (the last holiday he spent with the family; he told us to go and eat the turkey instead of worrying about him and we children said our final goodbyes), and Christmas Eve (when he died). Things at home fell apart, and I became well acquainted with depression–to the point where a teacher said something. It took me years to even talk about it–it led to emotional abuse at home, where it was understood we would “get over it.”

The death of my paternal grandmother was shortly after I graduated college. The family supported each other, and it didn’t hurt as badly even though it was sudden. My boss gave me time off and sent flowers, and the town brought enough food to feed all 13 of us immediate family members several times over (as my cousin said, “We’re Germans. We eat.”) I left shortly after the funeral because I had a psychiatrist’s appointment the next day. She said to me, “You look depressed. I’m increasing your medication.”

I replied, “I just buried my grandma. I’m supposed to look depressed. If you’re going to increase my medication for normal reactions to life events, this is just legal substance abuse.”

It did not go over well, but I still stand by my statement. Sometimes grief becomes a mental health issue, but, sometimes, it doesn’t. It depends on a number of factors.

Obviously, the relationship you had with the person will impact your grieving. But so will several other things, like the way he or she died, religious beliefs, and support from other family members and friends. Having lost friends to suicide, murder, disease, accidents, and natural causes, I can honestly say traumatic death is harder on the survivors and almost always requires mental health counseling. But it seems to be random when it comes to non-traumatic death.

Faith is a double-edged sword. It can help the loved ones to know the deceased is no longer suffering. However, as is especially true in the case of traumatic grief, faith can be sorely wanting. Questioning “why” can be frowned on in some circles, but sometimes we need to question “why.” In addition, religion frowns on suicide–mourners at my friend’s funeral remarked that it was good we could talk about it since they wouldn’t be able to at most churches.

Support is crucial. I remember when a psychologist made an offhand remark to me about “the first year” of grieving. Seeing my puzzlement and concerned about my comment, “Aren’t we supposed to be over it by then?”, he explained that grief is a process that doesn’t have a time limit or set order (Nine Common Myths And Realities About Grief). He also explained to me it was okay to talk about it–and I joined his grief support group to do just that.

How to Tell When Grief Requires Mental Health Help

I needed help after my maternal grandfather died, largely because my mother needed but did not get help after his death. As she cycled through denial, anger–a lot of anger–and depression; it seemed she would never accept it. She became emotionally abusive toward us kids, but maintained some semblance of a normal life for years. No one knew the hell that was going on at home. Eventually she came to terms with it, but not before some lasting damage was done to us kids.

Remembering the loved one will bring happiness and pain, sometimes within hours of each other–as my then-six-year-old brother observed after my maternal grandfather’s funeral, “People go to the church and cry then come back to the house and have a party.”

It is normal to reflect on the life of one who died, the circumstances leading up to the death, the death itself, and the funeral with mixed emotions. Obsessing, however, is not, and neither is constant sadness. Seek mental health help if grief begins to interfere with your ability to live your life.

You deserve to come to terms with the death of your loved one, and chances are that’s what your loved one would want. Don’t hesitate to ask for mental health help if you need it.