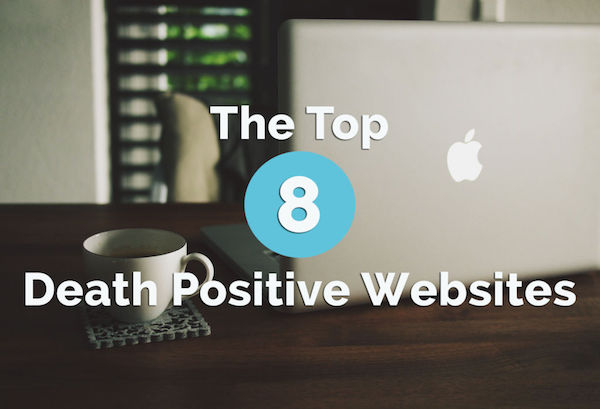 [I]t’s hard to talk about death without going into the history of it. We’ve talked endlessly on this blog about the ways in which death has changed and evolved over history. We once knew death intimately: we washed the bodies, buried them ourselves and mourned openly and loudly. However today we are, as some scholars would say, largely a death denying culture. The tides are changing and while the chances of us handling the bodies of our loved ones are slim, our awareness of death and dying has been on the rise. Fuelled by popular books, movies, TV shows and personalities, death and death positivity are on the minds of many people. To help foster this much needed change, we present to you the top 8 websites promoting death awareness! 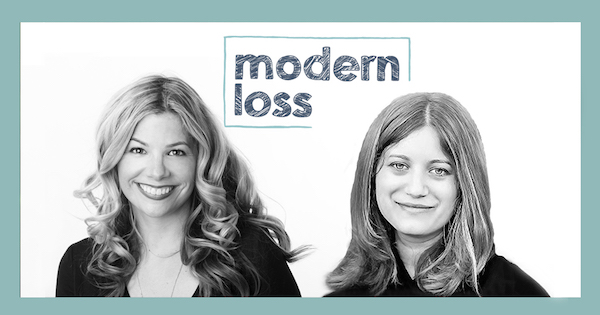 Modern Loss is a place to share the unspeakably taboo, unbelievably hilarious, and unexpectedly beautiful terrain of navigating your life after a death. Beginners welcome. This should say everything you need to know about this wonderful and informative website started by Rebecca Soffer and Gabrielle Birkner. Filled stories of grief, mourning and death acceptance, Modern Loss is a repository of stories, essays, resources and information about dealing with loss and picking yourself up again! 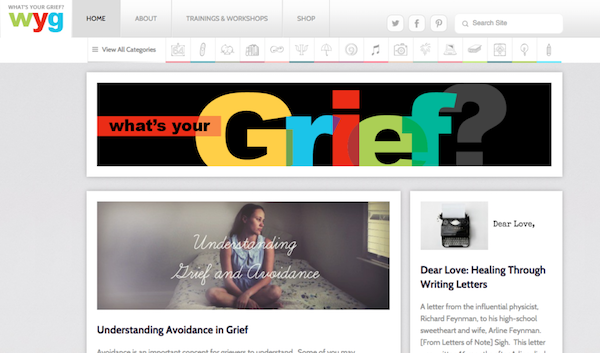 Founded by mental health professionals with 10+ years of experience in grief and bereavement, WhatsYourGrief.com is an excellent resource for anyone dealing with the loss of a loved one. Grief is a complex emotion but one that is completely natural. Rather than try and rush of process of bereavement, WYG encourages their readers to work through their feelings in positive, long lasting ways. Well written blogs, grief resources, how-to’s and more. 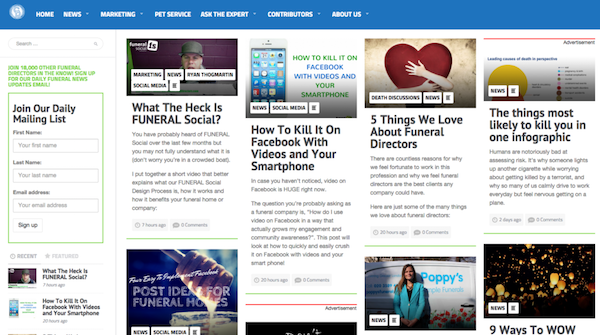 Interested in a first hand account of life in the funeral business? Connecting Directors is a great place to start. It is a collection of news, blogs, articles and marketing information tailored to the funeral profession. While some of it may not be relevant to your interests, there is a lot of great information there(plus we are featured there quite often **cough cough**). Started by Ryan Thogmartin, this website reaches thousands of death professionals and gathers articles from a number of sources. 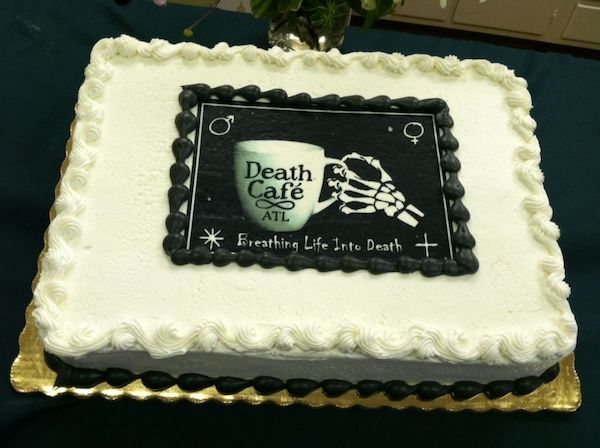 We couldn’t be bigger fans of Death Cafe! While the internet portion of Death Cafe is only secondary to the actual events, it is a great place to connect with a death positive community. Death Cafe’s are informal meetings that happen all over the world where people get together and talk about life, death and everything in between. Chances are there is a local Death Cafe chapter in your city(and if not, you should probably start one). We have been to two events held by our local Death Cafe and they were incredible! Expect tears, laughter and the unexpected. 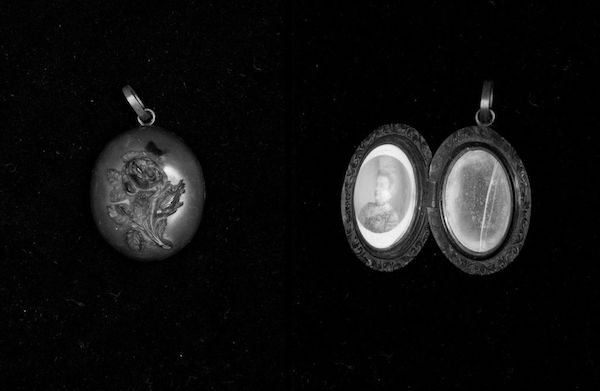 A newcomer relative the rest on our list, Death Maidens is important for several reasons. First, it is connected to growing death positive/death conscious movement. Second, it highlights the important, historical and growing role that women have played vis-a-vis death and dying. We often forget that women before the 20th century played vital functions in death. They washed and dressed bodies, they were the public face of mourning and they knew death in a way that few of us do today. We are really looking forward to some great and informative content!

3. Confessions of a Funeral Director 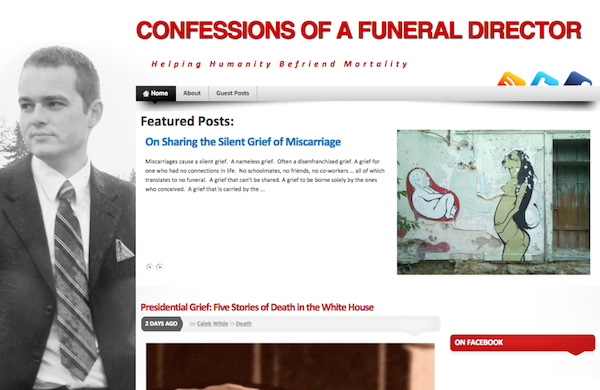 It would be no exaggeration to say that Caleb Wilde is almost a household name. People who are in no way connected to the funeral profession know his website and share his content. A 6th generation funeral director and prolific blogger, Caleb started Confessions of a Funeral Director as a window into the death profession. His blog runs the gamut from humour, memes, short stories, advice and of course, secrets from the world of funeral directors. A must read for anyone interested in death awareness!

2.  The Order of the Good Death 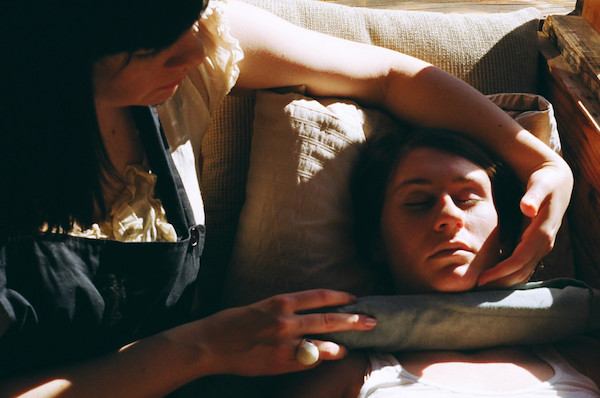 Founded and run by Caitlin Doughty, The Order has grown to become much more than a simple blog/website raising death awareness. The order now hosts dozens of members from academics, morticians, funeral directors and artists and is filled with both written content and video content. Caitlin’s well known YoutTube channel, Ask a Mortician, is an informative and hilarious video series. The Order now also runs the largest death positive meet-up in the world, Death Salon. Be careful though as you could get lost for hours on The Order’s website! 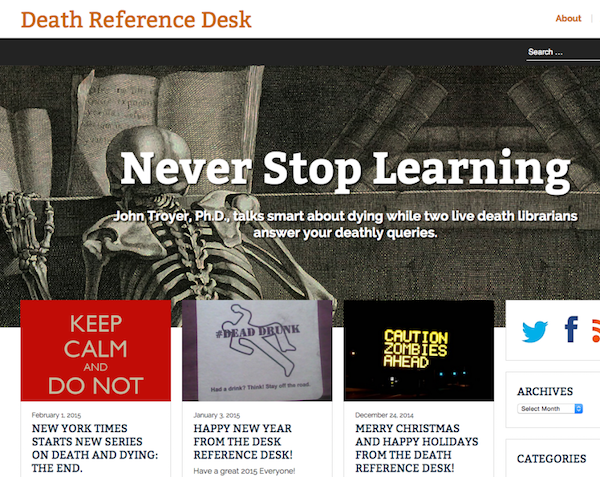 The Death Reference Desk is run by professor John Troyer, Deputy Director of and a Death and Dying Practices Associate at the Centre for Death and Society at the University of Bath and Librarians Meg Holle & Kim Anderson. Pulling from their knowledge and experience, the goal of the DRD is to inform the casually interested and morbidly curious alike about All Things Death: the bizarre, the batty and the beautiful, from interesting blogs and recommended books to commentary and analysis of death in the news. This website is an incredible resource for anyone interested in almost anything related to death and dying and best of all, you can ask John, Meg & Kim any question and they will answer them on their website!