“They were having people over to view the body so they had to try to keep the odors to a minimum,” said Edna Dieterle, with the historical re-enactment group, the Mourning Society of St. Louis.

Dieterle, 61, spent Saturday at historic Bellefontaine Cemetery in black dress and veil, as one of several people re-enacting a vigil at the gravesite of the Lindells, a family of five wiped out in a single week by a cholera epidemic that struck the city nearly exactly 152 years ago.

Although other historical enthusiasts hold cemetery tours or storytelling events, the Mourning Society has spent the last five years teaching people about Victorian funeral customs by bringing those customs back to life.

Re-creating mid-19th-century funerals is a hobby for Dieterle and her fellow mourners, but it’s also a way to connect people with the past through a shared experience, death, which was a pervasive part of daily life back then due, in part, to epidemics and unsanitary living conditions.

“People think Victorians were so focused on death, but they had so much of it to deal with,” said Dieterle, a nurse whose interest in historical medicine led her to learn more about diseases, death and funeral etiquette. “It was such a common visitor to homes in the 1860s. They weren’t morbid people, it was just reality.”

The Mourning Society also re-creates Victorian-style wakes at 19th-century homes, showcasing Dieterle’s creepy collection of mementos: jewelry made with the hair or teeth of a lost loved one, photos of dead children dressed in their Sunday best, black-and-white china painted with graveyard scenes that say “The Orphans” or “Mother’s Grave.”

Some of that collection — including instruments once used to “bleed” sick patients and recipes for funeral biscuits — will be on display at the Mourning Society’s event Oct. 26 at the Campbell House Museum in downtown St. Louis. Visitors will take part in a re-creation of the wake for Robert Campbell, a prominent businessman who died Oct. 16, 1879, in the family home. The house, which has its original furnishings, will be dimly lit by candlelight to set the mood as attendees learn about another killer that haunted the Victorians: diphtheria.

While October is prime time for the Mourning Society events, thanks to Halloween, members say their goal isn’t to spook spectators but to teach them.

“It has a somber atmosphere, but no one is jumping out of the coffin with a chainsaw,” said Katherine Kozemczak, another organizer with the Mourning Society.
“But if you think about it, dying of cholera is a pretty scary thing.”

As opposed to current day, Victorian customs encouraged people to mourn their loved ones openly, intensely, and for elderly widows, permanently, Dieterle said.

They mimicked the United Kingdom’s Queen Victoria — the namesake of the era — who upon the death of her husband, Prince Albert, in 1861 from suspected typhoid fever, plunged into deep mourning and wore black the remaining four decades of her life. The long-lived monarch ruled from 1837-1901.

“They focused on the grief, whereas nowadays we sometimes give advice to just move on,” Dieterle said. “The Victorians gave them time to mourn, time to grieve and time to heal.”

Women in mourning would wear special clothing — black dresses, veils, gloves and shawls, in addition to carrying parasols to block out the sun — for several months, if not a year or more. Women who couldn’t afford to buy funeral wear would dye an old dress with tea to stain it brown or gray. Men would wear armbands or brooches they could affix to regular clothing.

The homes of those in mourning would have their doors covered with black fabric, which, like the clothing, signaled to passers-by not to disturb them and muffled the sharpness of a knock on the door if they did.

“Whereas now, if you lose a loved one, people don’t know,” Dieterle said. “We’ve all had it happen where someone you haven’t seen in a while comes up and asks you how you’ve been, and you don’t want to talk about it. They could avoid those awkward situations.”

They may give people goosebumps these days, but Dieterle says there is logic behind every Victorian funeral custom.

“To us, now, they’re very sad, but for them it helped them focus on their grief, and they felt it was an appropriate thing to do,” Dieterle said.

For example, photo shoots of dead loved ones?

Jewelry with something from a dead relative?

“I say all you moms in the group probably have a snippet of your baby’s first hair cut taped in a baby book,” Dieterle said. “They just took it one step further.”

Just as they are now, mourning customs were a stable hand guiding people through difficult times, especially during the cholera outbreaks, Dieterle said.

“There were so many people dying during this and people didn’t know what to do, but they had to get through it somehow,” she said.

For the first 24 hours after an apparent death in the Victorian Age, relatives would sit with the body day and night just to make sure the person was actually dead. Cholera, for example, would often make people so dehydrated that they wouldn’t have enough fluid in their veins to detect a pulse.

“The term ‘wake’ came from the experience of watching the body to make sure they didn’t wake up,” said John Avery, a retired funeral director who plays undertaker for the group. “Before there was embalming — which began during the Civil War — on occasion, someone would fall asleep and be thought to have died when in fact they may have gone into a coma.

“And people were very afraid of being buried alive, so they would have someone sit and watch.” 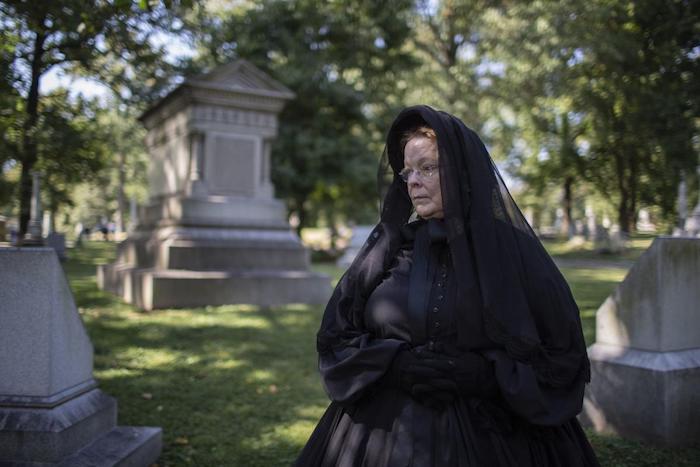 If the dead person didn’t come back to life, the family would then wash the body, using a special solution of vinegar and alum to keep the person’s skin taut and prevent it from discoloring. The hands-on involvement was part of the family’s grieving process, Avery said.

During the wake, the dead person was the life of the party. The body would be laid out on ice and adorned with flowers as the centerpiece of a candlelit room in which family and friends would gather.

At the Lindells’ second funeral, mourners and people interested in learning about the rituals gathered at Hotchkiss Chapel at the cemetery. Bob Ruby played hymns on the organ — “Abide with Me” for the procession, “Jesus Loves Me” during the service and “Nearer My God to Thee” for the recessional — while Tom Allen played the part of a minister.

The funeral re-creation began with the 23rd Psalm and included comforting words about everlasting life at a time of widespread sorrow. The sermon was written by Avery, a retired diaconal minister in the United Methodist Church, who led a procession to the family plot.

Pallbearers carried two antique coffins to the burial site. A white child’s coffin represented the one that held Peter Lindell, who died in infancy; a larger coffin was for his mother, Nancy. The service ended with more words of faith and comfort.

All five of the Lindells died of cholera within a week of each other and were buried Aug. 30, 1866, at Bellefontaine Cemetery. They were part of the family that owned property along the boulevard that now bears their name.

The cemetery was established after a severe cholera outbreak in 1849. During the 1866 epidemic, which killed more than 3,200 people, the cemetery buried 200 victims in August alone, said Daniel Fuller, cemetery event and volunteer coordinator.

Nearly half of the 87,000 people buried at Bellefontaine were interred from the Victorian Era to just before World War I, and much of the cemetery, dotted by towering, centuries-old trees, has remained virtually unchanged, Fuller said.

“That’s what makes the setting out here so good for this,” he said.

The Lindell family plot looks virtually the same as it did in 1866, though cemetery caretakers added plants on nearby graves to reflect Victorian tradition. Family plots back then would be outlined with plantings done by relatives, often ivy, which symbolized permanence; fragrant herbs such as sage and rosemary that invoked particular memories; and flowers, white for children’s graves to represent innocence, and red roses for love.

For people who missed the Mourning Society’s funeral re-creation Saturday, fear not. It will return the first Saturday of October next year, with a different theme.

While Mourning Society events may not be for everyone, there are those who return every year, Dieterle said.

“When you put it to life, you see schoolkids’ eyes light up, and they start asking all these questions about what they’re seeing in front of them,” she said. “They’re not going to get that out of a book.”