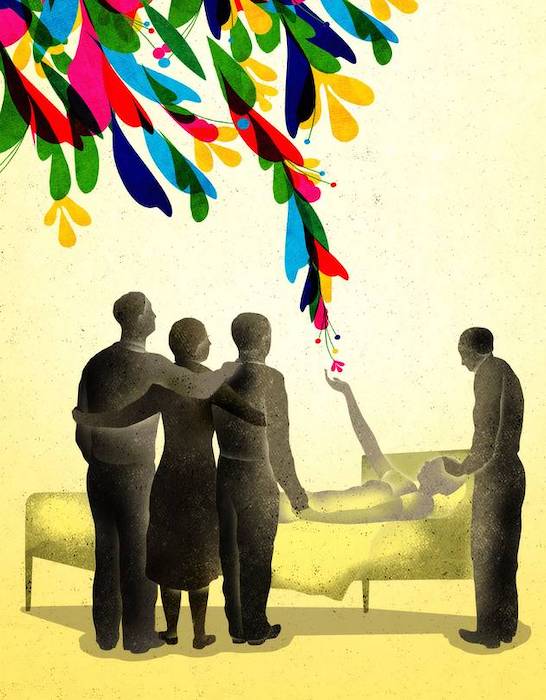 Recently, a neighbor and friend of mine died. After her cancer was diagnosed as incurable, she was referred to hospice care, and family members traveled long distances to spend quality time with her during her last month of life.

Her neighbors in our condo building clamored for slots in her packed social calendar. Two days before her death, she held a socially distanced open house for people lined up six feet apart outside her door to come in for a few minutes, one and two at a time, to say their goodbyes. Then we received an email telling us she had gone, quietly, at home, in the presence of family. All in all, the kind of good death promised by hospice care at its best. And yet there’s something about how it unfolded that I’m having trouble wrapping my head around.

I had spoken with my friend a couple of weeks earlier, and she told me that she was going through the steps to obtain medical aid in dying – which became legal in California through the 2015 End-of-Life Option Act. It requires two oral and one written request to a physician for a lethal dose of medication, with a 15-day waiting period and confirmation of eligibility by a second physician. My neighbor complained to me about the bureaucratic hoops, knowing that I am a medical journalist who has written extensively about hospice and end-of-life care and trusting that I could listen non-judgmentally.

I told her that the regulatory hurdles, rightly or wrongly, were crafted to prevent the appearance of abuse for a procedure that continues to generate controversy in medical ethics. Advocates say terminally ill patients should have the right to choose the time of their deaths and to opt-out of the pain and suffering of living with an advanced illness. Opponents argue that good hospice and palliative care can obviate that pain and suffering and thus the need for patients to request a medical escape from this precious life. There is little room for compromise between those two views, but the option is now legal in California and eight other states.

Some hospices and hospitals will not participate in the end-of-life option, and it can be hard to find a doctor willing to sign the necessary forms. Very few terminally ill patients actually go through with obtaining and consuming the lethal medication. Only 551 Californians started the process in 2018, and 337 took the medication to hasten their deaths, according to state records. There are also questions about the choice of medication, which may include a combination of morphine, diazepam, and propranolol, a beta-blocker that slows the heart.

My parents died of cancer or cancer-related complications. I was present in my mother’s hospital room when death came to claim her. I was a hospice volunteer for more than 20 years and sat with a number of cancer patients in their final days. In other words, I feel familiar with the process by which cancer, which kills more than 600,000 Americans every year, makes its terminal advance.

Some patients may pursue oncologic treatments until the end, trying to stave off that advance. For others, hospice provides an option to step off the medical treadmill and receive care at home with the support of an interdisciplinary team of end-of-life experts who focus on comfort, symptom management, and maximizing opportunities for dignity and peace. Either way, terminal cancer is relentless.

With good palliative medical management, many – but not all – of the worst side effects and symptoms of terminal cancer can be managed. It can also be very messy, with incontinence, other bodily fluids, and unpleasant odors. All bodily functions will fail by the end. Most of the time, it unfolds on the disease’s timeline, as it has throughout human existence.

When someone dies of cancer, there is a retrospective sense of its inevitability, that this is what had to be. Those who witnessed its relentless advance can find comfort in that inevitability. It wasn’t a cosmic mistake that cancer has taken their loved one; it was part of the natural order of things. The loss and grief for those left behind are real, but the memories, hopefully, can be free of recriminations.

The end of life can also be a time to focus on expressing what Dr. Ira Byock calls “the four things that matter most” as one faces life’s end: please forgive me, I forgive you, I love you, thank you – plus a fifth, saying goodbye. Some have found that life becomes singularly precious when its ending looms, with opportunities for the most poignant kinds of resolutions.

To me, this is what a good death could be, one grounded in the reality that the cancer could not be denied but with doors opened for meaningful interactions along with the mess and pain. And there’s the ineffable profundity of a loved one’s final moment of transition from this world, such a huge, terrible mystery, yet guaranteed to everyone who lives. That should command our respect.

What happened to my friend? A peaceful, natural passing from the cancer? Or did she avail herself of the end-of-life option to make it happen a little sooner? If the latter, was it pain, or loss of control over the messy details, or an unwillingness to continue living with the existential awareness that death was lurking around the corner? Was she tired of living, that tiredness magnified by the cancer, or tired of talking about it? I’ll never know what she chose. It’s really none of my business. My admiration for her is unaffected, undiminished.

But I find to my surprise, thinking it might have been the case, that something feels missing. It doesn’t seem final, or quite so real. With COVID, her memorial gathering was transferred to Zoom. To me, it just doesn’t feel like the same thing, death’s natural advance versus a medical intervention to check out early, even if the outcome is more or less the same.

What were the unmanaged issues to make ending it sooner seem the right answer? Could something have been done to make her more comfortable, more willing to stay for a natural end? Could there have been more poignant farewells, more reflections, more stories? Could I have had one more chance to talk with her about what she was seeing from her vantage on the rim of eternity? Could I have heard her laugh one more time? And am I selfish to want that? That’s what I can’t get my head around.