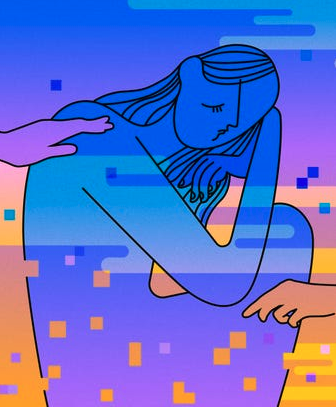 I attended my first Zoom funeral this past June. My husband Aaron’s aunt Maria, who lived in Pennsylvania, died of breast cancer, but her passing was still defined by the pandemic. Sitting in front of a laptop at the dining-room table in my mom’s house in southeastern Quebec, Canada, we, along with a dozen or so others who couldn’t be there in person, watched our American family gather for the small service.

Despite a few to-be-expected technical issues — people not knowing how to mute or talking over each other — it was incredibly moving. I could see the faces of all the other online participants at once, noticing their collective grief more than I ever would have in person, a mournful mosaic. Towards the end, the funeral organizer asked if anyone joining remotely wanted to share a story. Everyone in attendance turned towards the laptop screen and the grief of the absent unexpectedly took the spotlight. Though I didn’t share, I felt more visible than I ever have attending a funeral, aside from when I delivered my father’s eulogy. It was unlike any service I’ve been to, in a good way.

COVID-19 has forced us to reassess everything in our lives these past few months, but especially our relationship to death and grief. It’s the great force hanging over this pandemic, the thing we fear, what we’re fighting to stave off, while it’s simultaneously thrust in our faces on a daily basis via news reports and press conferences. Though this proximity to loss is a new experience for those who have been luckily shielded from saying goodbye to a loved one, we can all use it to become better at handling grief beyond the pandemic. There have been a lot of calls for not returning to “normal” post-COVID, and the way we mourn deserves to be part of that change.

In part, because many of us aren’t great at dealing with death.When my father died from cancer when I was 29, barely anyone knew how to talk to me about it. (Though it comes from a good place, “I’m sorry for your loss” can start feeling impersonal after a while.) Three-and-a-half years later, I’ve gotten used to my sadness being awkwardly side-stepped or ignored.

There are a few who are willing to dive into the grief weeds with me, who ask questions about my dad and understand that, though the years pass and the pain changes, it never goes away. But many people act like even mentioning someone I love who has died is a faux pas, turning the individuals themselves into taboos. Though grief will always be a personal experience, it doesn’t need to be an isolated one. I’ve never met anyone who wants to be forgotten after they’re gone, so it’s no stretch to assume that the dead want their names in our mouths, shared times in our minds, and swells of feelings in our hearts.

Many of us aren’t great at dealing with death. When my father died from cancer when I was 29, barely anyone knew how to talk to me about it. Though it comes from a good place, ‘I’m sorry for your loss’ can start feeling impersonal after a while.

This loneliness we feelwhen faced with death can be exacerbated by the way we mourn. Although Christianity has been on the decline in the US, our society’s handling of grief has been largely shaped by that faith’s solitary and stoic traditions. For many, grief is seen as something best talked about behind closed doors, and if you’re lucky, in therapy. We’re told to “stay strong” and have been taught to treat mourning as a disease to cure ourselves of within a tidy time frame. After that, we’re mostly silent about our pain rather than reflecting on its shape-shifting, life-altering nature.

This was partially why the Zoom funeral felt so important. It reminded me that, though they’re held to honor the dead, funerals are mostly for the living, one of the few times we’re allowed to mourn openly. The virtual service drove home the importance of coming together even though physical distance felt more impassable than ever. There was also something surprisingly reassuring about attending a funeral at home, surrounded by familiar comforts, with the option of turning off the camera or stepping away from the screen if we needed a moment. It’s unique to be forced to grieve in this new way, so privately and publicly at once. It was something I didn’t realize I’d needed.

For years, I’ve been envious of people who participated in Mexico’s Día de Muertos (Day of the Dead), the holiday that honors those who’ve passed, year after year, long after they’re gone. The celebration reminds me of a trip I took in 2015 to central Bali, just before the one-year anniversary of my uncle John’s death. My visit in the mountains coincided with a Hindu-Balinese cremation ceremony known as ngaben: It started with a long procession through the village for which people wore bright clothes adorned with tons of flowers, and it culminated in an outdoor cremation.

The closest I’ve come to that communal celebration of death was when I was nine years old and my family held a haphazard shiva after my zaida died. As per the Jewish week-long mourning tradition, we covered the mirrors in his Montreal apartment, and people dropped by to sit in uncomfortable chairs. But more importantly, I had a lot of time with my extended family during which zaida’s passing could settle in and move us through a spectrum of emotions, tears, and jokes, solidifying our relationships in the process. That’s the thing about mourning, when it’s shared openly, it brings people together.

Taking the time to let grief sink in feels natural in a pandemic when we’re alone with so much time on our hands.During quarantine, I got more recognition for my sadness than I have in the past, too. Maybe that’s because we were mourning all sorts of things — the normalcy of our lives, our lost connection to each other, the tenuous future. With our everyday fast-paced routines stopped in their tracks, it became painfully obvious how much we craved the contact we’ve taken for granted. Isolation also seemed to make many better at paying attention to what truly matters. On what would have been my father’s 66th birthday, my friend Catherine left me flowers on my doorstep. Another friend left me a voicemail playing one of my father’s favorite songs in its entirety, a gesture that made me laugh-cry like I never had before, and I felt closer to both of them for it.

It’s a cliché that death is the great unifier, but COVID-19 has given us the opportunity as a global population to reflect on what that means and empathize like never before. We can use our times of solitude — as we might have to go back into isolation periodically — to contemplate and appreciate the lives we get to live, while paying our quiet dedication to those who are gone. Allowing the loss to redefine us while also moving on is surprisingly healing, and that in the end is the greatest tribute we can give.