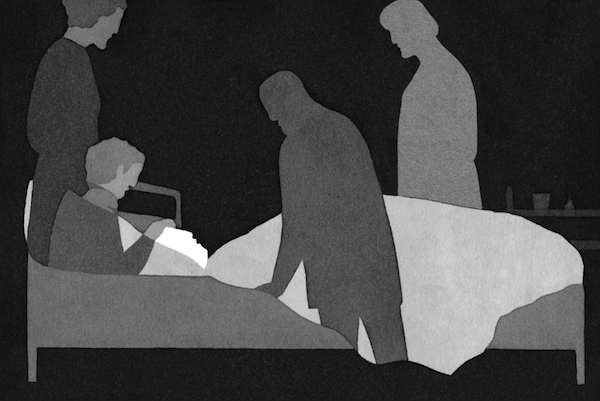 One organ will fail, then another. Or maybe all at once. We’ll become more similar to each other than to people who continue living with your original diagnosis or mine.

Dying has its own biology and symptoms. It’s a diagnosis in itself. While the weeks and days leading up to death can vary from person to person, the hours before death are similar across the vast majority of human afflictions.

Some symptoms, like the death rattle, air hunger and terminal agitation, appear agonizing, but aren’t usually uncomfortable for the dying person. They are well-treated with medications. With hospice availability increasing worldwide, it is rare to die in pain.

While few of us will experience all the symptoms of dying, most of us will have at least one, if not more. This is what to expect.

“The graves are full of ruined bones, of speechless death-rattles” (Pablo Neruda)

We suspected the patient wouldn’t survive off the ventilator. A blood clot had crawled up one of the vessels in the back of his brain, blocking blood flow to the area that controlled alertness. He would die from not being awake enough to cough.

The beat of the death rattle began when the breathing tube was removed and continued until life was done. It was a gurgling, crackling sound, like blowing air through a straw at the bottom of a cup of water. The average time between the onset of death rattles to death itself is 16 hours. For him, it was six.

The death rattle is a symptom of swallowing dysfunction. Normally, our tongue rises to the top of the mouth and propels saliva, liquid or food backward. The epiglottis, a flap in the throat, flops forward to protect the swallowed substance from entering the airway.

In the dying process, the symphony of swallowing becomes a cacophony of weak and mistimed movements. Sometimes the tongue propels saliva backward before the epiglottis has time to cover the airway. Other times, the tongue fails to push at all and saliva trickles down the airway to the lungs in a steady stream. The death rattle is the lungs’ attempt to breathe through a layer of saliva.

Despite the sound’s alarming roughness, it’s unlikely that the death rattle is painful. The presence of a death rattle doesn’t correlate with signs of respiratory distress.

As often happens in medicine, we treat based on intuition. To lessen the volume of the death rattle, we give medications that decrease saliva production. Sometimes, we are successful in silencing the rattle. More of the time, we placate our instinctive concern for a noise that probably sounds worse than it feels. Without hurting our patients, we treat the witnesses who will go on living.

“You villain touch! What are you doing? My breath is tight in its throat” (Walt Whitman)

The patient was a wiry woman in her 80s who had smoked for seven decades. Cigarettes turned her lungs from a spongelike texture to billowing plastic bags that collapsed on themselves when she exhaled. It was like trying to scrunch all the air out of a shopping bag. Air got trapped.

Air hunger — the uncomfortable feeling of breathing difficulty — is one of the most common end-of-life symptoms that doctors work to ease.

People sometimes ask why the treatment for painful breathing is a medication that can depress breathing. You’d guess that opiates would worsen air hunger.

The answer hinges on defining why air hunger is uncomfortable in the first place.

Some researchers think the discomfort of air hunger is from the mismatch between the breathing our brain wants and our lungs’ ability to inflate and deflate. Opiates provide relief because they tune our brain’s appetite for air to what our body can provide. They take the “hunger” out of “air hunger.”

Others believe that the amount of morphine needed to relieve air hunger may have little effect on our ability to breathe. Since air hunger and pain activate similar parts of the brain, opiates may simply work by muting the brain’s pain signals.

The patient traded her cigarettes for a breathing mask when she came to the hospital. She quit smoking for the umpteenth time and made plans to go home and live independently again. A few days later, her thin frame tired. She died in hospice.

“Do not go gentle into that good night” (Dylan Thomas)

My grandfather screamed two days before he died. “Open that door and let me out! Right now! It’s a travesty! Open that door!”

It was the scream of a lost child. My grandfather’s eyebrows, which had been lost over the years from the outside inward so that only a centimeter of long gray hairs near the middle remained, tilted toward each other.

Until then, we were preparing for missing and absence. Not for an agitated delirium. Not for rage.

A famous poet once wrote that “dying is an art, like everything else.” For hospice doctors, the artists of death, terminal agitation is the subject’s revolt against the shaper. It’s uncommon, but it can be difficult to watch when it happens.

Instead of peacefully floating off, the dying person may cry out and try to get out of bed. Their muscles might twitch or spasm. The body can appear tormented.

There are physical causes for terminal agitation like urine retention, shortness of breath, pain and metabolic abnormalities. There are medications that quell it. Yet it’s hard to discount the role of the psyche and the spiritual.

People who witness terminal agitation often believe it is the dying person’s existential response to death’s approach. Intense agitation may be the most visceral way that the human body can react to the shattering of inertia. We squirm and cry out coming into the world, and sometimes we do the same leaving it.