Explaining dying and death to kids 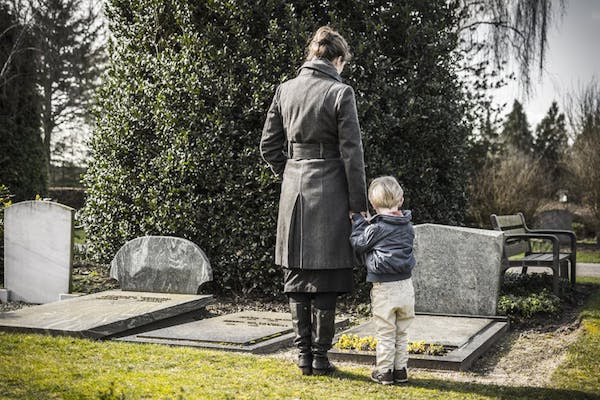 When we told the kids that we lost grandpa last night, our 5-year-old immediately jumped up and started trying to find him.

Adults tend to use euphemisms, or “code words,” to talk about illness, dying and death. They often do this to soften the news they’re sharing. This can be confusing for children in ways that you might not expect. Because their experience of sickness is usually minor like a cold or ear ache, they may not understand the illness is serious. Or they may not understand the person has died and won’t move or breath again.

This table provides suggestions of clear words and phrases to use. 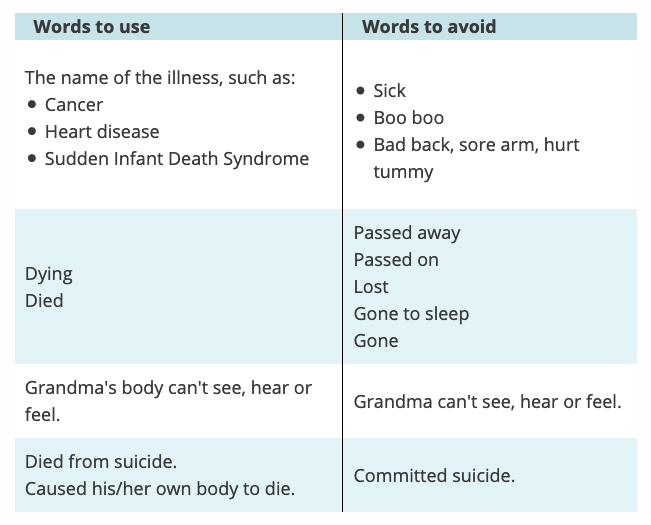 I explained to the kids that even though I really wanted to play with them and walk them to school the way I used to. I can’t because of the cancer.

More than a cold
When adults explain that someone is sick or ill, children might think this is much the same as an everyday cold or flu. For this reason, it’s important to name the illness or condition.

Name the illness
Use the words cancer or heart attack. This:

My dad is much more tired than usual because of the cancer.

Uncle Rob has an illness called cancer. It started in his lung so it’s called lung cancer. Cancer isn’t like getting a cold or the flu. It doesn’t spread from one person to another. Cancer doesn’t work that way. You can still touch mom, hug mom, share food with mom, and you won’t get cancer from her.

Explain the impact
Use clear language to explain how the illness is affecting the person. For example:

Aunt Barb has an illness called ALS. It’s causing her body to not work properly.

If the illness is affecting the person’s thoughts and behaviours, let your child know this:

You may have noticed that your grandma has been acting differently. I’ve noticed that she gets angry more easily. This is because the cancer is in her brain, and this changes her mood and behaviour.

Outline how to behave
Let them know if they need to behave differently than usual when they are with the person who is ill:

I know one of your favourite things is to get in my lap and read stories. Because of the cancer in my bones, I can’t hold you on my lap like I used to, which I feel sad about. Let’s try lying beside one another instead.

Telling Emma that I’m dying was so hard, but it was important to me that she was prepared for the changes she’s going to see in me as I get closer to death.

We totally confused our kids by trying to explain the afterlife without first explaining what happens to the body when someone dies.

We worried about how much to tell the kids. We didn’t want to scare them with too much information.

Where did he go?

It’s important to use the words dying and death. Passed away or passed on can be confusing and too abstract for young children to understand. If we say that we lost grandpa or mom is gone, children often wonder:

Why aren’t we looking for him?

Did I do something to make her leave?

When is she coming back?

Start by explaining what happens to the physical body.

When a body dies, it stops working and can never work again.

The body doesn’t think or feel anymore so it doesn’t get cold or hungry and it can’t feel pain.

The body can never come back to life.

It’s best to explain that “the body” includes the person’s head. Young children often think that “body” means from the neck down – and so they may mistakenly imagine the body of the person who has died with no head.

To show them the difference between being alive and dead, ask them to jump up and down, breathe in and out, and feel their own heart beating.

When a person dies, they can’t jump around, they stop breathing and their heart can’t beat or work anymore.

Discussing cause of death

If your child asked what caused the death, give an honest and simple explanation.

Your sister was hit by a car. Her body was so injured that she died.

Your uncle had a heart attack. This caused his heart to stop working and he died.

Unless they ask, you don’t need to describe what happened in detail. If they do ask, let their questions guide which information to give, and answer them honestly. 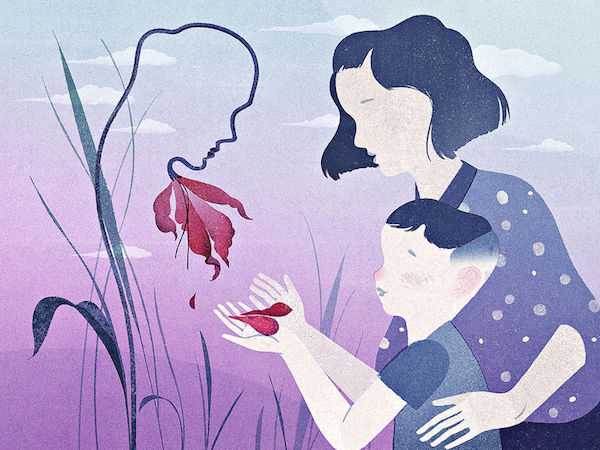 How these conversations help

As difficult as these conversations were, they’ve actually brought us closer together. I feel the kids trust that I’ll include them when hard things are happening in our family.