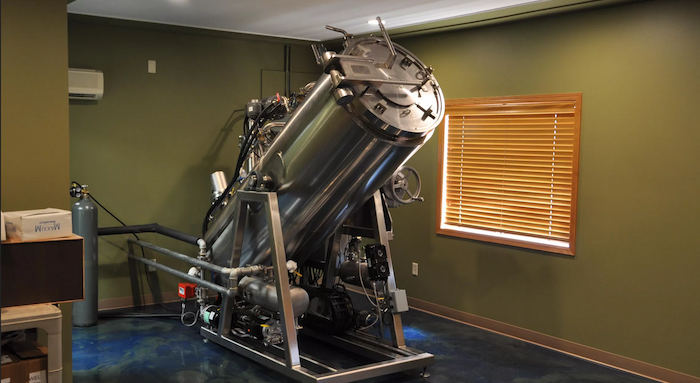 When you die, your body is going to decompose.

It starts from the moment you pass. Your organs begin to shut down. Hair stops growing, skin recedes. Some parts of the body take longer than others, but eventually, as with all things, it all starts to break down.

But there’s also another alternative — one designed to accelerate the decomposition process through the medium of water. It’s known as alkaline hydrolysis, or water cremation. One part spa, one part chemical blend, a few hours of a swirling soak, and your earthly remains are no longer.

“It’s basic chemistry,” explains Anas Ghadouani, leader of the research group Aquatic Ecology and Ecosystem Studies. “You have organic matter and you add a base to it and it just decomposes. You can write the equation to it. It’s very simple.”

Despite this, alkaline hydrolysis remains one of the most divisive and misunderstood practices in contemporary funeral technology.

The concept itself isn’t new. Amos Herbert Hobson of Middlesex, England, patented the first alkaline hydrolysis machine all the way back in 1888. He used it to dispose of animal carcasses.

In the century and a half since, the technology has evolved, and it has the potential to shake up the death industry.

The process is straightforward. Bodies are placed in a machine containing a chemical mixture of water and alkali. The mixture is then heated and cycled. Over the course of hours, the body is accelerated through its natural decomposition process, resulting in a residual liquid made up of amino acids, peptides, salt, soap and bones — the last of which is broken down into white ash.

“I was stunned that there was a way to dispose of tissue without burning,” said Wilson. “You don’t have any external pumps or tanks or chemicals. It’s all there at the machine.”

There are undeniable benefits to this process. In 2011, a study from the University of Groningen compared conventional burial, cremation, alkaline hydrolysis and cryomation and found that alkaline hydrolysis had the lowest overall environmental footprint.

The low temperature also means pacemakers and joint replacements can remain inside the body. In flame-based cremation, these are extracted to prevent a reaction — pacemakers, especially, are incredibly volatile when subjected to extreme heat.

Yet despite the fact that flame-based cremation subjects the remains to intense fire, alkaline hydrolysis is seen as the more graphic option for potential funerals, when both are just as valid. Legal roadblocks and cultural concerns have plagued water cremation since its inception.

And there’s a simple reason for that: Alkaline hydrolysis has a reputation shaped by years of misrepresentation. Nobody wants to feel like they’re disrespecting their loved ones.

Media, morals and the mafia

Most people’s first experience of alkaline hydrolysis is through popular culture.

In the second episode of Breaking Bad, audiences sees drug dealer Jesse Pinkman dissolve a dead body in his apartment’s bathtub using hydrofluoric acid he’d sourced from his high school’s chemical stores. He returns the next day only to find the acid had eaten through the bathtub itself and floorboards beneath, before finally falling through to the floor below.

Even if it could, the science doesn’t check out — Mythbusters proved it.

Whether it’s a question of gulping down Soylent Green or shunting bodies into acid barrels, television and film haven’t been kind to the practice of alkaline hydrolysis.

Outside of television, urban legends have tarred alkaline hydrolysis with further negativity. In 2011, researchers had to debunk claims the Sicilian mafia disposed of human remains in a process called lupara bianca, or white shotgun. Just like in Breaking Bad, the mafia supposedly used acid — an entirely different, cruder chemical process.

Mafia urban legends and shows like Breaking Bad create a sense of violence surrounding water cremation that simply doesn’t hold up. Water cremation, at its core, is no more than the acceleration of a natural process.

What remains to be dealt with, however, is what comes out the other side. Ashes are one thing — you can pop them on the mantle in a decorative urn, sprinkle them at sea or even have them launched into space — but what about the residual liquid?

One of the biggest roadblocks to the acceptance of alkaline hydrolysis technology is the issue of wastewater. Because of its association with death, the liquid is perceived as too unsanitary to be processed normally. Say it goes through the same recycling plants that supply residential areas, the idea of drinking the essence of a dead body sounds abhorrent. It’s hard enough swallowing the idea of recycled sewage water. Remains? Inconceivable.

But technology already exists to tackle almost any kind of wastewater.

Sewage water is filtered for reuse in municipal treatment plants. Organic material is broken down in anaerobic digesters, which convert the material into methane or “biogas.” Specially designed ultrafiltration systems can even tackle aqueous nuclear waste.

“Any liquid waste that we have, we can deal with,” says Ghadouani.

Yet in Australia, residual liquid from water cremation isn’t permitted to be treated via the municipal water treatment facilities or digesters. More worryingly, there’s a disconnect here — and it’s one that, for the most part, is behind the closed doors of the funeral industry.

“One of the most common things the public doesn’t know,” says leading US thanatologist and death educator Cole Imperi, “is that when someone is embalmed, all the blood that comes out of your body, where does that go? It goes down the drain.”

In fact, almost all the human waste that comes from hospitals and funeral homes as a result of the embalming process is permitted to be processed through these official channels.

“So if you’re allowing byproducts from funeral homes to go into the municipal water system for treatment, why are you discriminating against one particular disposition method?” Imperi asks. “It’s an interesting kind of cognitive dissonance.”