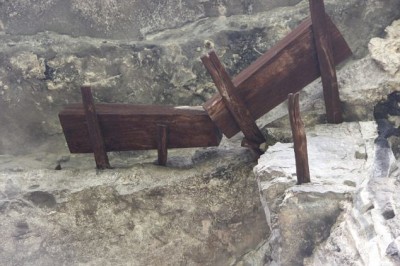 They’re definitely closer to god, one way or another.

But these bizarre hanging coffins have baffled people for centuries in southern China.

The tombs – attached to mountain cliffs in Gongxian, Sichuan province – were left behind by the Bo people, believed to have died out 400 years ago.

Each coffin is made from a hollowed out single tree trunk and was originally protected by a bronze cover.

“Some of the tombs are nearly 3,000 years old and the most recent date back to about 1500. Nobody really knows why they dealt with their dead in this way.

“It is believed that they thought the gods would be able to reach them more easily like that,” explained one local expert.

“People say that the hanging coffins prevented bodies from being taken by animals and also blessed the soul for all eternity,” they added.