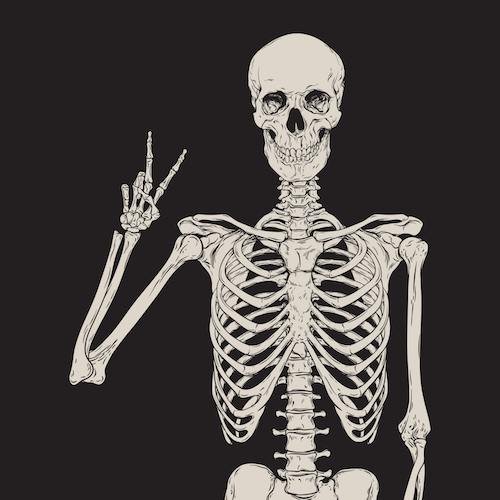 As of last week, more than 150,000 people have died from the coronavirus in the U.S. alone. And we should be honest that that number is likely an undercount due to inconsistencies in how various localities attribute COVID-19 as a cause of death (The New York Times). Worldwide, more than 600,000 people have died of Coronavirus (NPR). The death toll will continue mounting in coming months. So in such a time as this, taking a step back to reflect on our own mortality seems in order.

Now, I will readily confess that confronting the subject of death can feel like a lot to take on: it can be a heavy, freighted topic, but it is also incredibly important. As the saying goes, “None of us are getting out of this alive!” One option, of course, is denial: trying to avoid the topic of death as much as possible until our time inevitably comes. But I invite you to consider that there is a better way. Keeping our mortality in mind and cultivating practices supportive of dying well (to the extent that is within our control) can be a key part—and sometimes a deeply moving, meaningful, and beautiful part—of living well.

Along these lines, reminders of mortality can be a central practice in the Buddhist tradition. Indeed, some Buddhist traditions specifically include “four reminders” which are sometimes linked to the origin story of the Buddha. After all, the rich and privileged Prince Siddhartha was launched onto the spiritual quest that would lead him to become the Buddha precisely when he wandered outside the protected gates of his palace and encountered three visceral, existential reminders about impermanence and change. He encountered, in turn:

In each of these cases, the young Siddhartha Gautama—the future Buddha—realized, “I am not exempt”: I too will grow older, get sick, and someday die.

My intent is not to be unduly morbid. Instead, it is to realize that reminders of our mortality—that none of us are promised even the next moment—can wake us up into more fully and freely experiencing life. We’re not going to be around forever, so stop sweating the small stuff; let that [BLEEP] go. We’re not promised even tomorrow, so let’s make the most of this time that we do have here and now. Can you feel that aliveness, that edge that remembering our mortality can bring?

The fourth reminder is that contemplative practices offer us a path of liberation—not an escape from those first three reminders (old age, sickness, and death), but a way of transforming our relationship to unsatisfactoriness. As the saying goes, “We can’t stop the waves of change from coming, but we can learn to surf.”

If you will indulge me in a related tangent, part of what comes to mind when I think about death is sex. Not in a weird way, but in a free association to another of those other big, freighted parts of the human condition. And it regularly makes me proud to be part of the Unitarian Universalist movement that is more than five decades into a commitment to comprehensive, lifespan sexuality education. Our Whole Lives (affectionally abbreviated as OWL) was launched fifty years ago in 1970. (This program was originally called AYS, About Your Sexuality.) For more than five decades Unitarian Universalism has been at the forefront of the sex-positive movement: affirming a wide range of sexuality as natural and healthy and emphasizing safer sex practices, consent, body-positivity, and reproductive justice.

I bring up that longterm commitment to the sex-positive movement because we quite progressive UUs have some work to do to be equally as committed to the death-positive movement. Death-positive, you might be asking yourself, “What is that?” For the uninitiated, allow me to introduce you to Caitlin Doughty, my favorite death-positive advocate. Doughty describes herself as a “mortician, activist, and funeral industry rabble-rouser.” I highly recommend all three of her books:

All her writing is equal parts hilarious and profound. Some of you may recall that four years ago, I wrote a blog post on mortality inspired by Doughty’s memoir, as well as by the physician Atul Gwande’s book Being Mortal. I highly recommend that book as well, if you or someone you love is wrestling with end-of-life medical decisions.

For now, I would like to share with you the eight central values of the Death Positive Movement as articulated by a group Doughty helped found, called The Order of the Good Death:

And our culture is changing even if we still have a long way to go. One of the most pervasive death positive shifts is the Hospice Movement (which started in the 1960s and entered the U.S. in the mid-1970s). Hospice has initiated a much-needed sea change in according death greater dignity.

Relatedly, many of you may be familiar with doulas in the context of accompanying, guiding, and empowering people giving birth. There are also a growing number of people being trained as death doulas to accompany, guide, and empower people at the end of life.

And some of you may have also heard of or even participated in the Death Cafe movement, which was founded in 2004 as a way to connect people who want to talk about death in an open, honest way. As one of their promotional slogans says, Death Cafes, “never involve agendas, advertising or set conclusions. Interesting conversations are guaranteed!”

If you google “Death Cafe” (or visit deathcafe.com) and your zip code into the “Find a Death Cafe” link, you’ll find that the closest Death Cafes. You may even find one has moved to Zoom during the pandemic, and is open to all.

Death Cafes are an opportunity to demystify the death experience. We offer an open, safe environment for discussing thoughts and feelings about all manner of death and dying.

At a Death Cafe people drink tea, eat cake and discuss death. [“Life’s short, eat dessert first,” right?!] Our aim is to increase awareness of death to help people make the most of their (finite) lives…. Please note: Death Cafes are not meant to act as support groups or grief counseling.

If this post leaves you a little “death curious,” perhaps joining an upcoming Death Cafe might be right for you.

Overall, the hope is that being more open, honest, and transparent about our inevitable death can empower us to make the most of the life that we have. One ancient Buddhist inquiry practice puts it this way: “Since death alone is certain, and the time of death uncertain, what should I do?”

As we sit with that question, allowing it to sink in, I want to conclude with a story. A few years ago my colleague the Rev. Georgette Wonders preached a sermon on the subject of death and mortality to Bradford UU Community Church in Kenosha, Wisconsin, the congregation she served as minister. That sermon was titled “Facing Death: The UU Book of the Dead.” She preached it on Sunday, August 6, 2014 with no knowledge at the time that she would be killed two days later in a car accident.

I invite you to reflect on the final section of Rev. Wonders’ sermon on “Facing Death: The UU Book of the Dead.” She is speaking to us from beyond the grave: both her words and the example of how she lived her life are part of the legacy that she had left behind as a gift for those of us still living. As you listen, notice if any words or phrases particularly resonate with you in this season of your life. Whether we are saying goodbye to a loved one—or whether we are the one being said goodbye to—the way we prepare is to: