Riggs’ deeply moving “The Bright Hour: A Memoir of Living and Dying” takes its title from a quote by Ralph Waldo Emerson — who, we learn, was Riggs’ great-great-great-grandfather. Riggs, a poet who clearly inherited her famous ancestor’s insight and wit, leads us through all four stages of her journey with metastatic breast cancer, which — cruelly, and at times, hilariously — intersects with her mother’s cancer journey; her mother goes into hospice and dies not long after Riggs’ mastectomy. Dark stuff, but “The Bright Hour” is indeed suffused with brightness — a series of luminous reminders that “the beautiful, vibrant, living world goes on” even in the midst of pain and loss. Riggs died in February, shortly after completing the book; her widower, John Duberstein, provides a touching afterword.

Danticat’s “The Art of Death: Writing the Final Story,” is part of Graywolf Press’ “The Art of” series in which authors explore specific craft elements of creative writing. The book offers a critical examination of how and why writers — a broad, at times dizzying, array, including Zora Neale Hurston, Joan Didion, Gabriel Garcia Márquez and Danticat herself — address death in their work.

“We write about the dead to make sense of our losses,” she writes, “to become less haunted, to turn ghosts into words, to transform an absence into language. Death is an unparalleled experience, so we look to death narratives, and to the people in our lives who are dying, for some previously unknowable insights, which we hope they will pass on to us in some way.”

These books are somewhat the inverse of one another: Riggs weaves literary criticism into her memoir, while Danticat weaves memoir — focused largely, wrenchingly, on her own mother’s death from cancer — into her literary criticism. Both writers quote Michel de Montaigne, who wrote extensively about mortality in the 16th century — Riggs, in fact, prefers his crankiness over her great-great-great-grandfather’s rhapsodies. He even becomes a muse of sorts to Riggs; she writes, “I can hear Montaigne hollering: break it open, look inside, feel it, write it down.” 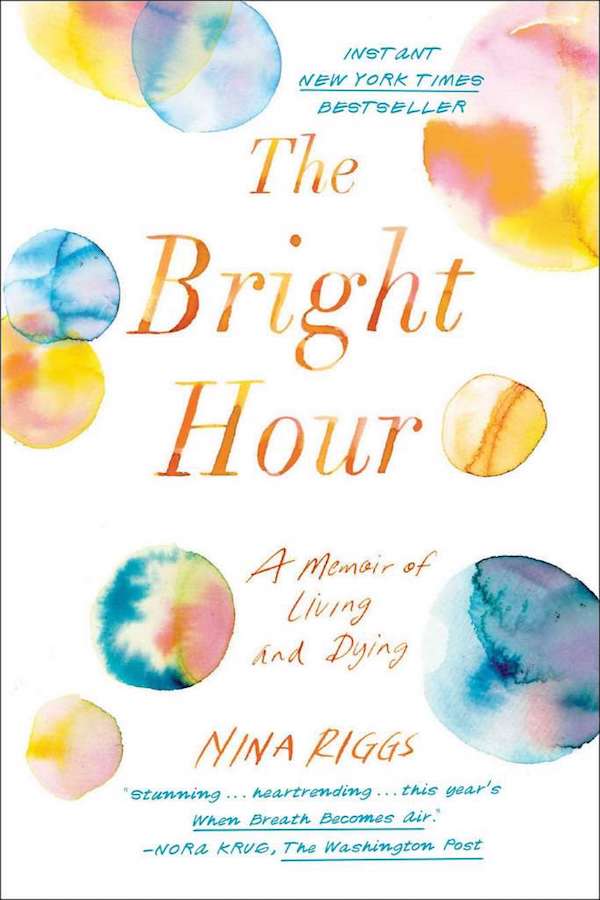 “The Art of Death” helps explain why “The Bright Hour” is so affecting. “The more specifically a death and its aftermath are described,” writes Danticat, “the more moving they are to me. The more I get to know the dying person on the page, the more likely I am to grieve for that person.” Riggs writes about her own dying — and living — with stunning, tender, specificity. Take, for example, her obsessive quest for the perfect couch. After musing over how she can figure out how to let go of everything in her life but mothering her two young sons, she writes, “So maybe I don’t try to figure it out. Maybe I just aim to get the couch right: strong bones, high quality leather, something earthy and animal and real. A surface that knows something of what it was to be alive, that warms to our touch and cools in our absence.”

Danticat allows us to mourn her mother through closely observed detail as well, showing us the purses her mother left behind, filled with hard caramel candy, letting us hear her mother’s charming turns of phrase such as this one, translated from her mother’s Haitian Creole: “Most of us enter this world headfirst, then we leave it feetfirst.”

Danticat notes that humor can help keep death narratives from becoming “overindulgent, self-righteous, self-piteous, melodramatic, sentimental, or a combination of some of the above.” Riggs peppers her writing with a great deal of humor, as in this passage after she starts using a cane: “I’m pretending that I’m starting a hip new craze that people don’t even know about yet — like vaping or lumberjack beards or bone broth. Canes: the new frontier in walking. Like walking only better. Extra virgin, cold-pressed walking.” She clearly came by her sense of humor from her mother, who, while in hospice, delighted in responding to funny texts with “the Bitmoji with a hand coming out of a grave that says ‘Literally dying!’”

Both books serve as wake-up calls, bracing reminders to live while we are alive, to appreciate this gorgeous, absurd world of ours — and the people we love within it — while we can. As Riggs quotes from Montaigne’s final essay: “Let us make good use of our time. We still have so much of it that remains idle and ill-used.”

One Reply to “‘The Bright Hour,’ by Nina Riggs and ‘The Art of Death,’ by Edwidge Danticat”