As Song Hua (pseudonym) lay in her open casket, nearly a dozen people dressed in black stood above the 34-year-old shedding tears and paying heartfelt tributes. Incense burned from an altar flanked by wreaths as moving music played in the small, candlelit chapel in downtown Beijing. But this wasn’t any ordinary memorial service. After all, Song wasn’t actually dead. 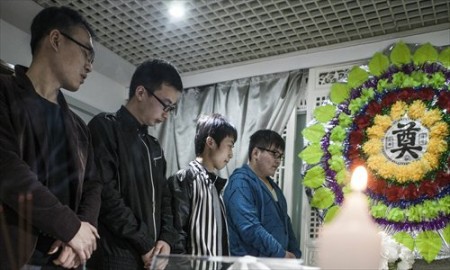 “I really wanted to experience what it feels like to die,” said Song, whose faux funeral was attended by 10 “mourners” playing the roles of family members, friends and colleagues.

Death might be a certainty in life, but it is a major taboo in Chinese culture. Visiting ancestors’ tombs for Qingming Festival, which falls on April 5, used to be the closest most people were comfortable with getting to death, but now a growing number of people are participating in educational activities that help them to develop a rational understanding of death.

Try before you die

Song’s fake wake last month was organized by the Inner Light Group (ILG), a Dongcheng district-based counseling agency that has provided the service to around a dozen people since last year. Each wake costs 100 yuan ($16.11) and runs for two hours.

Faux funerals have been popular in Japan and South Korea since 2010, but they are still relatively new in China. They give people like Song, whose battle with depression had caused her to contemplate suicide, a glimpse of the impact their deaths might have on loved ones while reminding them of their own mortality.

“I couldn’t accept myself and wanted to end it all. I knew it was wrong, but I felt trapped in an abyss of grief and despair. I thought, ‘Why not leave the world?'” said Song.

Before Song’s faux funeral, she was required to give a farewell letter to her “relatives” played by ILG members. She was then draped in a white sheet and laid in her casket at the center of the 30-square-meter chapel before the agency’s 45-year-old founder and mock celebrant, Jia Dao, told the somber audience of Song’s death by suicide.

“I lay face-up in the casket as my ‘parents,’ ‘siblings’ and ‘colleagues’ circled me,” explained Song.

Everything seemed to be progressing like any normal funeral until a ‘colleague’ who had apparently returned from abroad to attend Song’s ‘funeral’ held her hand and sobbed about being left heartbroken.

Upon hearing his words, Song was stirred from her motionless state and tears rolled from the corners of her closed eyes.

“Their words were so sincere and warm that it connected deeply with my heart. Since then, I haven’t thought about suicide once. I can now accept death naturally,” said Song.

For those who want to take their near-death experience a step further from a funeral, the Life and Death Experience Center in Shanghai might be the best option. Visitors can write their own will and epitaph, as well as nominate organs they wish to donate.

The experience culminates inside a 4D “crematory” that shows the living what the dead never see, hear or smell: roaring flames turning skin, hair and bones to ash.

The center, which has attracted more than 400,000 yuan from over 200 investors since July 2013, is slated to open later this year.

Ding Rui, one of the center’s co-founders, was inspired to create the grisly tourist attraction after climbing into a real crematory himself in November 2011 while working as a trainer for volunteers at Hand in Hand, a Shanghai-based NGO that provides palliative care.

“When I was inside the crematory, I felt breathless for a moment and very close to death,” recalled Ding. 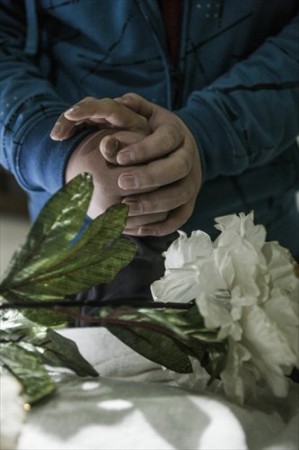 Although Ding knew he was safe, staring at flame vents positioned above his head and at his sides was an unnerving experience.

“Being inside [the crematory] strengthened my resolve to open the center to teach people about death. I wanted to simulate the vivid feeling of being cremated and also experiencing rebirth,” said Ding.

Dying to experience the other side

His time spent caring for people nearing the end of their lives led Ding to realize problems with Chinese being “unable to openly talk about death.”

“After taking care of more and more dying patients, I found that people’s fear of death is infectious like a virus,” said Ding, adding that his biggest concern from experience in palliative care was seeing how few people – from the elderly to their family members – struggled to directly face death.

No one lives forever, but sometimes people can be uncomfortable at being reminded they are mere mortals.

“The deep impact of Chinese culture is a major reason why few people are comfortable talking about death,” said Wang Zuoji, deputy director of the Beijing Folklore Committee and a member of the capital’s non-tangible cultural heritage committee.

In Chinese culture, the number four is considered unlucky because its pronunciation in Putonghua is close to “die.” Similarly, a clock is never given as a gift because it sounds similar to the word for “end.” Even the sight of chopsticks placed upright in a bowl of rice can cause superstitious Chinese to shudder due to its resemblance to incense.

“Some customs and taboos have no scientific reasoning, existing only to reject anything related to death or bad luck,” said Wang.

Preserving dignity at the end 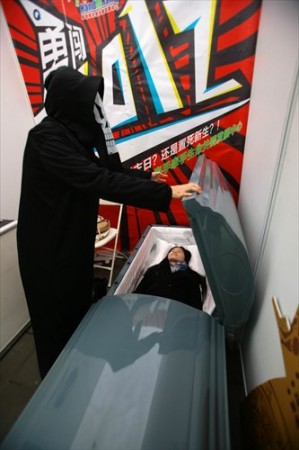 Ding said he shared a feeling of powerlessness with those he cared for in palliative care, noting that medical apparatus used to extend people’s lives often came at the cost of individuals’ dignity.

“People dying don’t have the right to decide matters relating to their death, which are instead handled by relatives often influenced by others’ opinions,” said Ding.

Most people spare no effort to give their loved ones the best medical care possible, even if it means extending their life for a short time only. Life-support machines and medical ventilators are often used to keep alive patients unable to talk or move out of bed.

In a society that values filial piety, many relatives don’t dare assist or speed up a parent’s death. Despite a December 2013 survey by Shanghai Jiao Tong University finding that more than two-thirds of Chinese have an open, tolerant attitude towards euthanasia, the practice is banned under Chinese law and there are no signs it could be legalized any time soon.

“We want to put it in the spotlight by letting people experience the closest thing to it. Death education is important because no one knows when their number is up.”

Wang Yifang, a professor at Peking University’s Health Science Center, recalled how one of his colleagues learned after teaching a class in 2009 that his father was terminally ill. Accepting fate gave both father and son peace of mind.

“My colleague shunned technology and medical care that would extend his father’s life, choosing instead to provide palliative care at home. His father died graciously,” said Wang Yifang.

Since 2009, Wang Yifang has taught a course about life and death that helps students come to grips with an issue avoided most of their young lives.

Approaches to death education vary in China. It currently isn’t included in curriculums of schools, with opinions among experts divided over whether it should be added.

Medical students in Taiwan are required to lie in a coffin and read farewell letters, while students at a high school in Hainan Province visit funeral parlors to inspect how ashes are stored after cremation.

Chen Yue, a counselor at the Sunshine Psychological Counseling Corporation in Beijing, has taught a class since February about death education.

Attendance is low, however, with even some fellow counselors unable to sit through classes due to the grim nature of its subject.

“Parents need to take the initiative in teaching their children about death. The subject of death is horrible, but neglecting it makes it even more terrifying to children,” said Chen.

“China has a long way to go in death education, which can not be achieved in the span of one or two generations. People need to dramatically change their perception of death, but this can only be done little by little.”