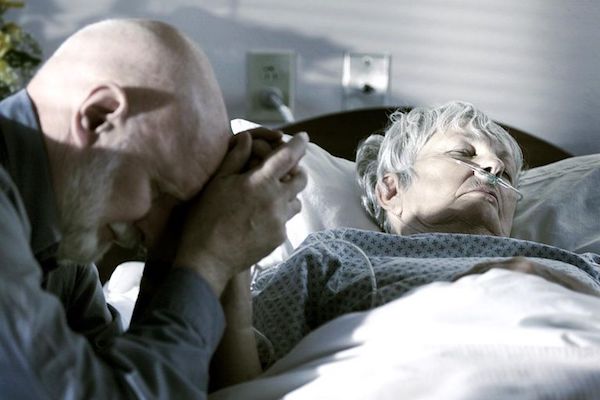 [T]he dying process usually begins well before death actually occurs. Death is a personal journey that each individual approaches in their own unique way. Nothing is concrete, and nothing is set in stone. There are many paths one can take on this journey but all lead to the same destination.

As a person comes close to death, a process begins; a journey from the known life of this world to the unknown of what lies ahead.

As that process begins, a person starts on a mental path of discovery, comprehending that death will indeed occur and believing in their own mortality. The journey ultimately leads to the physical departure from the body.

There are milestones along this journey. Because everyone experiences death in their own unique way, not everyone will stop at each milestone. Some may hit only a few while another may stop at each one, taking their time along the way. Some may take months to reach their destination, others will take only days. We will discuss what has been found through research to be the journey most take, always keeping in mind that the journey is subject to the individual traveler.

The Journey Begins: One to Three Months Prior to Death

Behavioral and Psychological Changes: As a person begins to accept their mortality and realizes that death is approaching, they may begin to withdraw from their surroundings.

They are beginning the process of separating from the world and those in it. They may decline visits from friends, neighbors, and even family members. When they do accept visitors, they may be difficult to interact with and care for. They are beginning to contemplate their life and revisit old memories.

They may be evaluating how they lived their life and sorting through any regrets. They may also undertake the five tasks of dying.

Physical Changes: The dying person may experience reduced appetite and weight loss as the body begins to slow down. The body doesn’t need the energy from food that it once did. The dying person may be sleeping more now and not engage in activities they once enjoyed. They no longer need food nourishment. The body does a wonderful thing during this time as altered body chemistry produces a mild sense of euphoria. They are neither hungry nor thirsty and are not suffering in any way by not eating. It is an expected part of the journey they have begun.

One to Two Weeks Prior to Death

Mental Changes: This is the time during the journey that one begins to sleep most of the time. Disorientation is common and altered senses of perception can be expected. One may experience delusions, such as fearing hidden enemies or feeling invincible.

The dying person may also experience hallucinations, sometimes seeing or speaking to people who aren’t there. Often times these are people who have already died. Some may see this as the veil being lifted between this life and the next.

The person may pick at their sheets and clothing in a state of agitation. Movements and actions may seem aimless and make no sense to others. They are moving further away from life on this earth.

Physical Changes: The body is having a more difficult time maintaining itself. There are signs that the body may show during this time:

Journey’s End: A Couple of Days to Hours Prior to Death

The person is moving closer towards death. There may be a surge of energy as they get nearer. They may want to get out of bed, talk to loved ones, or ask for food after days of no appetite. This surge of energy may be quite a bit less noticeable but is usually used as a dying person’s final physical expression before moving on.

The surge of energy is usually short, and the previous signs become more pronounced as death approaches. Breathing becomes more irregular and often slower. “Cheyne-Stokes” breathing, rapid breaths followed by periods of no breathing at all, may occur. Congestion in the airway can increase causing loud, rattled breathing.

Hands and feet may become blotchy and purplish (mottled). This mottling may slowly work its way up the arms and legs. Lips and nail beds are bluish or purple. The person usually becomes unresponsive and may have their eyes open or semi-open but not seeing their surroundings. It is widely believed that hearing is the last sense to go so it is recommended that loved ones sit with and talk to the dyingduring this time.

Eventually, breathing will cease altogether and the heart stops. Death has occurred.