Dr. Sherwin B. Nuland, a surgeon and author who drew on more than 35 years in medicine and a childhood buffeted by illness in writing “How We Die,” an award-winning book that sought to dispel the notion of death with dignity and fueled a national conversation about end-of-life decisions, died on Monday at his home in Hamden, Conn. He was 83.

The cause was prostate cancer, his daughter Amelia Nuland said. 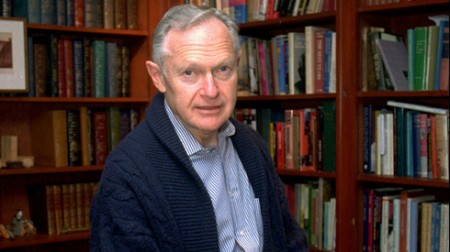 To Dr. Nuland, death was messy and frequently humiliating, and he believed that seeking the good death was pointless and an exercise in self-deception. He maintained that only an uncommon few, through a lucky confluence of circumstances, reached life’s end before the destructiveness of dying eroded their humanity.

“I have not seen much dignity in the process by which we die,” he wrote. “The quest to achieve true dignity fails when our bodies fail.”

In “How We Die, ” published in 1994, Dr. Nuland described in frank detail the processes by which life succumbs to violence, disease or old age. Arriving amid an intense moral and legal debate over physician-assisted suicide — perhaps the ultimate manifestation of the concept of a dignified death — the book tapped into a deep national desire to understand the nature of dying, which, as Dr. Nuland observed, increasingly took place behind the walls of the modern hospital. It won a National Book Award.

Dr. Nuland wrote that his intention was to demythologize death, making it more familiar and therefore less frightening, so that the dying might approach decisions regarding their care with greater knowledge and more reasonable expectations. The issue has only intensified since the book was published, and has been discussed and debated in the medical world, on campuses, in the news media and among politicians and government officials engaged in health care policy.

“The final disease that nature inflicts on us will determine the atmosphere in which we take our leave of life,” he wrote, “but our own choices should be allowed, insofar as possible, to be the decisive factor in the manner of our going.”

Beyond its descriptions of ruptured embolisms, spreading metastases and bodily functions run amok, “How We Die” was a criticism of a medical profession that saw death as an enemy to be engaged, frequently beyond the point of futility.

In chiding physicians, Dr. Nuland pointed the finger at himself, confessing that on more than one occasion he persuaded dying patients to accept aggressive treatments that intensified their suffering and robbed them of an easier death. One of those patients was his brother, Harvey, an accountant who died of colon cancer in 1990 after receiving an experimental treatment with no reasonable chance of success.

Looking back on that episode, Dr. Nuland wrote that he had mistakenly tried to give his brother hope, failing to acknowledge that disease, not death, was the true nemesis.

He was born Shepsel Ber Nudelman on Dec. 8, 1930, in the Bronx, the son of Orthodox Jews who had emigrated from Russia. (He adopted the first and middle names Sherwin Bernard when he went to kindergarten.) His childhood was spent in a tiny South Bronx apartment with his parents, his older brother, his maternal grandmother and a maiden aunt, in an atmosphere permeated with sickness and death.

A brother died before Dr. Nuland was born, and at age 3, he was hospitalized for diphtheria. His mother, the emotional center of his family, died of colon cancer when he was 11. In his memoir, “Lost in America” (2003), he recalled with striking vividness the bad smells and bloody pads that came from his mother’s room.

Dr. Nuland’s adolescent years were dominated by his father, Meyer Nudelman, a garment worker who was incapacitated by chronic illness, physical infirmities and his resistance to a new way of life. He terrified the family with his explosive rages, never learned to read or write English — Yiddish was the predominant language at home — and could not walk more than a short distance without his son’s help.

Dr. Nuland regarded him with fear and shame, emotions that would take a deep psychological toll later in his life.

While still in high school, Dr. Nuland and his older brother changed their names from Nudelman, separating themselves from a weak, angry man who, Dr. Nuland wrote, represented “everything I so desperately wanted to be rid of.” They chose a name first adopted by a cousin, Willie Nuland, a physician who looked after the boys’ parents when they were ill, and whose compassion and competence pointed Dr. Nuland toward his career.

Dr. Nuland received his bachelor’s degree from New York University in 1951 and went on to study medicine at Yale, attracted by its distance — geographically and culturally — from the old-world Jewishness in which he grew up. Reading about spinal cord diseases as a medical student, Dr. Nuland discovered that his father’s crippling illness was tertiary, or chronic, syphilis. Dr. Nuland felt anger, and then pity. “I now had some perception of the tragedy of his life,” he wrote in his memoir.

Dr. Nuland received his medical degree from Yale in 1955. Electing to specialize in surgery, he set his sights on becoming chief surgical resident at Yale-New Haven Hospital, entering a Darwinian competition for a position seldom occupied by Jews. In 1958, Dr. Nuland won the coveted appointment. Four days later, his father died of complications of syphilis. Mr. Nudelman never knew the source of what led to his father’s death.

“I think that one time, before he was married, Meyer Nudelman was very unlucky,” Dr. Nuland said in a 2003 interview with The New York Times.

Mr. Nudelman’s death fulfilled Dr. Nuland’s wish to escape his father, but instead of liberation, he felt intense guilt and shame. Plagued by feelings of unworthiness, he felt himself becoming his father, assuming Mr. Nudelman’s hunched shoulders and shuffling gait.

By his early 40s, his depression had become so severe that he was institutionalized for more than a year. Senior psychiatrists recommended a lobotomy, but they were overruled by the young resident psychiatrist who had been assigned to his case, who insisted on electroshock therapy. By early 1974, it was clear that the treatment had been a success, and as Dr. Nuland recovered, according to his memoir, he started to make peace with his father and, perhaps, himself.

From 1962 until 1991, he was a clinical professor of surgery at Yale, where he also taught bioethics and medical history. He was a surgeon at Yale-New Haven from 1962 to 1992, when he retired to write full time.

“How We Die,” which won the National Book Award for nonfiction in 1994 and was a finalist for the Pulitzer Prize in nonfiction in 1995, has sold more than 500,000 copies worldwide. In its concluding chapter, Dr. Nuland confessed that he, like many of his readers, desired a death without suffering “surrounded by the people and the things I love,” though he hastened to add that his odds were slim. This brought him to a final question.

“And so, if the classic image of dying with dignity must be modified or even discarded,” he wrote, “what is to be salvaged of our hope for the final memories we leave to those who love us? The dignity we seek in dying must be found in the dignity with which we have lived our lives.”