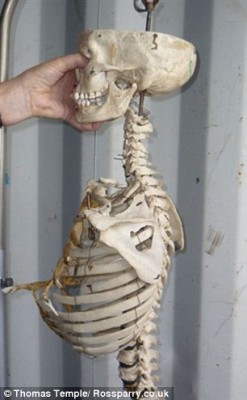 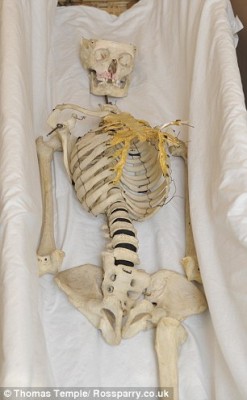 A skeleton which has been used for years by a school’s art and science departments is to be given a proper funeral after it was discovered to be real human remains.

Haydock High School in Merseyside has been using the bones – affectionately know as ‘Arthur’ – to allow children to practice their drawing and learn about the body for at least 40 years.

But when an art technician at the school was having a clear-out of the cupboards, she decided to have the bones tested to see if they were real.

She was shocked when the tests came back positive, with experts believing the bones belong to an Indian man who suffered from curvature of the spine and was aged between 17 and 30 when he died in the 1900s.

Sandra Dixon, the school worker behind the discovery, said she found the bones while reorganising the department and thought they should be investigated.

Due to the age of the skeleton, it is currently unclear how the mystery bones ended up in the classroom. It is also not known how the man died or whether he came to Britain before or after his death.

Pictures show he is missing his right leg, the lower section of his left leg and the top of his skull.

Local undertakers Haydock Funeral Service have now offered to provide a full funeral including a wicker coffin, hearse and bearers free of charge.

‘Arthur’ will finally be given a send-off tomorrow at Greenacre Woodland Burials in Rainford, Greater Manchester, at a ceremony attended by staff and pupils from Haydock High.

Ann Ashburner, the school’s head of art, said: ‘When we found out it was a real human skeleton that we had in the school for 50 years, we knew that, by law, a burial was the only way we could correctly dispose of the remains.’

Ms Ashburner added: ‘He was a human being and it is our duty as a Christian school to do our best for him because all lives are sacred and you have to be respectful when he has served us for so long.

‘You would do the same for any stranger so we owe it to him to lay him to rest properly.’

Ms Ashburner has been at the school for 17 years and has shared a room with the skeleton since the science department replaced him with a plastic one in recent years.

She insists that the funeral has doubled up as an ‘educational tool’ as well as fulfilling a legal obligation.

Ms Ashburner said: ‘The children have been really respectful and have not treated it as a laughing matter at all.

‘They have been asking me where he is all the time and it is really useful educational tool.’ 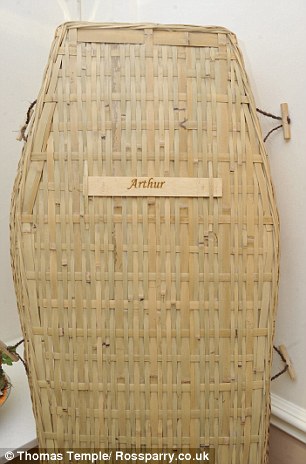 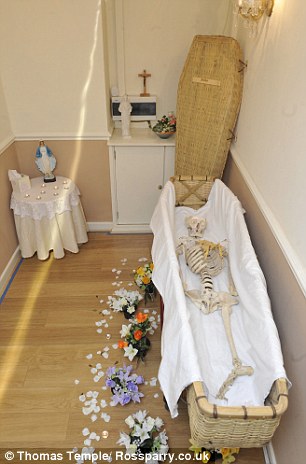 She added: ‘As part of their PHSCE studies, the children have to learn about death and it is a difficult subject to cover in a classroom environment.

‘But this will allow the children to experience traditional Christian and Hindu burials without the grief of it all.

‘It is the first time I have heard of a school doing something like this but I am sure that there are plenty of schools with real skeletons who have no idea about it.’

Keely Thompson, of Greenacre Burials, said: ‘We are delighted to provide a final resting place for Arthur. It’s a beautiful place of burial.’