An intensive care doctor has written an honest book about her experiences. 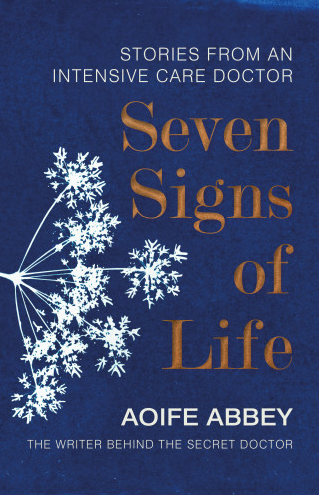 NONE OF US want to end up in intensive care. But if we do, we should hope we end up with a doctor like Aoife Abbey.

The UK-based Irish doctor has written a book about what it is like being an intensive care doctor, exploring the emotional moments she has experienced. It’s a book that might just change how you think about death – and how you talk to your family about it.

After reading the book, Seven Signs of Life, you’ll want to sit down with your nearest and dearest to discuss what might happen to you should end up needing intensive care. Talking about death or serious illness is a taboo that still persists, but Dublin-born Abbey – who is in her mid-thirties – wants us to confront it.

“I appreciate people need to talk about death more because what I often say is, people come into intensive care, they don’t know they’re going to be there – it’s a surprise to everybody, they’ve had an accident or something,” she explains. “And you say to their family ‘what do you think they would have wanted?’ And the answer is ‘God, I don’t know. We haven’t talked about it.’ Why would you?”

This avoidance can lead to big questions being unanswered. “How would the patient feel about risking being alive and not being able to talk, how would they feel about organ donation? There’s lots of things people don’t discuss, and I think we need to discuss them more,” says Abbey, who graduated from the University of Warwick in 2011.

She advises people to have those difficult conversations with loved ones. “But what I would say is that it can often be difficult to imagine yourself in situations, so people might say ‘oh I would hate to have dementia. I’d rather just drop off.’,” she cautions. “When actually they don’t know that it’s true, because they’re not in that situation. So I think we have to be careful when we have conversations about life and death and what you’d like, in that we’re having general conversations and that we’re still not trying to pigeonhole people into certain decisions.”

Because often people will say ‘I would hate to live this way’ but actually then find an amount of joy and contentment living that way in the end because they have no other option. It is a difficult conversation.

“I guess in Ireland there’s always that thing of people say ‘don’t tempt fate’,” she says. Abbey and her family have had to deal with serious illness themselves. Her brother, Aaron, was a disability rights campaigner and died in October 2018. He was in and out of hospital a lot while the siblings were growing up.

“I’ve certainly had encounters where people have been frightened for me to tell their loved one that they are dying. And not just because they were worried that it would upset them emotionally, which is a very valid worry and I would worry the same thing,” says Abbey.

Because they would feel like that would mean they would die quicker. That crops up quite a lot, people say don’t tell them, because they’ll just give up.

‘It’s routine… until it isn’t’

The book was inspired by anonymous columns Abbey wrote for the British Medical Association, and the stories of the patients in the book are anonymised and amalgamated.

“I always loved intensive care and I loved it because there’s a lot of science there, you get to be specific, you get to care about the numbers,” says Abbey. “You have a lot of facilities, you know the nursing to patient ratio is one to one or one to two, you have all the numbers in front of you, everything is quite scientific.”

At the same time, this is juxtaposed against “the massive uncertainty of not knowing what somebody’s outcome is going to be”.

The level of pressure and responsibility builds the longer you work in intensive care.

There’s always an opportunity to ask for help. You learn as you go along and that’s how we do it, so it was never the case where I had to walk into an ICU and make loads of decisions.

She says that like everything in medicine, “all of this stuff is routine until it isn’t”. Indeed, in the book she details times when things did not go to plan. “If you intubate 100 patients and 99 of them are perfect, easy … it’s the one that’s difficult that’s the issue. So most things are routine, there’s always the potential for it not to be.”

When it comes to errors, the onus is on the doctor to make sure they learn from it.

“There’s nothing that makes you learn more than making a mistake,” she says. “You’re unlikely to ever do it again.”

The main thing is there is a culture, and it’s the right culture, where we don’t blame people when they make mistakes. And we’re supposed to recognise it’s a systems failure, and there’s lots of different explanations for why things go wrong, and it’s rarely one person’s issue; one person’s fault. But at the same time you have to figure out ways as a doctor to still accept and be OK with the fact also that you did make a mistake.

She includes in the book an incident where she missed something on a chest x-ray. It must have been nerve-wracking to write about when she first included it in a Secret Doctor blog post.

“It is still in numbers their most read blog. So it’s … I’m not going to say vindicated but there’s a need for that kind of discussion and people clearly had an interest or it struck a chord with them.”

She has never worked with the HSE, and describes the NHS as something that’s very much woven into national identity in the UK. “You have this service that’s free at the point of care, and people are very proud of it. It’s a very emotive topic,” she says, noting that “it doesn’t matter how angry the media is with the NHS at a given point, patients that I see behave the same. Most of them they are grateful, they’re frightened, they’re scared – they are just people, they are separate from political issues.”

Speaking of political issues, the big one for NHS workers and Irish emigrants like Abbey is Brexit. “If I wasn’t from Ireland I would have a huge amount of uncertainty and I’d be very worried,” she says. “You don’t really know what’s going on. You take so much for granted.”

But it’s not something that she lets take over her work. “I think you just learn to be very focused on what you’re doing. You have to let things in in the moment or else you’re not human, and you can’t engage with someone who’s being very emotional with you with a wall in front of you, because it’s not human and it’s not very nice for them either.”

She has learned to talk to her colleagues and friends about things that affect her, and not keep it bottled up. This is her eighth year in training, and in August 2020 she’ll be able to pursue a consultant job.

In the book she details very tender and emotional moments, such as when a dying man asks her to lift his head up so he can talk to her properly. It’s those intimate moments that leave an impact on her.

“There’s things you get exposed to but I guess in the moment it’s so much about what that person is feeling, you do feel a little bit humbled by the fact that you’re able to give them anything,” she says.

Because they’re going through something that is horrible. And you put it aside until you get home, or until you close the door of the room.

Seven Signs of Life is out now, published by Penguin Random House.