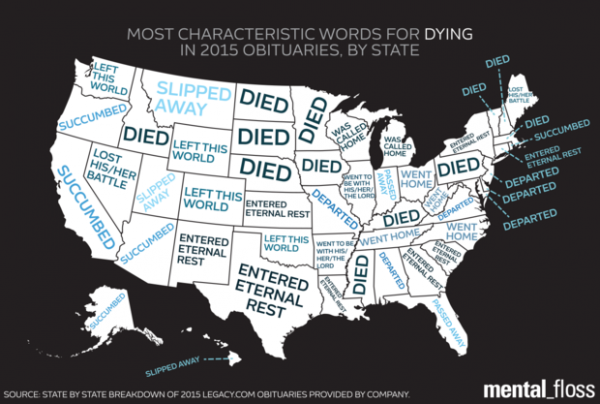 If you’re an American alive today, chances are you’ve heard or used one of over 100 different euphemisms for death. A common reason many people don’t just say someone has “died” is a desire to not want to appear too harsh. This happens not just in everyday conversation, but also in obituaries we read in newspapers and increasingly online.

Are some expressions for dying more prevalent in obituaries than others? Are there regional variations? To find out the answers to these questions, I reached out to Legacy.com, a leading online provider of paid death notices. According to the data they provided, in 2015, they hosted 2,408,142 obituaries across the 50 states and the District of Columbia. Of those, 1,341,870 included one of their 10 most common euphemisms, or the word died.

The top term is unsurprising. “Passed away” was used in 32.5 percent of all obituaries and topped the national list. In every single state, it was either “passed away” or “died” (20.6 percent nationwide at #2) that was used most often. The relative prevalence of each of these terms paints a much more diverse picture, however.

Using a similar methodology to the “Most Distinctive Causes of Death” map, I calculated the difference between the regional and national prevalence of each term. The highest value gives the phrase that is most “characteristic” to that state. As it turns out, some terms are used comparatively more often than others depending on where you’ve died—or at least where your obituary is published.