[C]onfronting sickness and death is part of a faith leader’s job description. Members of the clergy sit with congregants during chemotherapy treatments and pray with them in the midst of pain.

Pastors prepare for this work at seminary, spending a semester working as a hospital chaplain or volunteering at a nursing home. However, some still enter professional ministry unprepared to sit at someone’s bedside and offer advice, according to recent research on religion and end-of-life care.

Many faith leaders are uncertain of when aggressive treatments should be traded for hospice care and confused about what palliative treatments consist of, reports a study in the April issue of the Journal of Palliative Medicine.

Seven in 10 clergy members say it is “somewhat” or “quite a bit” important for them to encourage ongoing treatment for a cancer patient, even when a doctor says there is no hope for a cure, notes a new study in the Journal of Pain and Symptom Management. 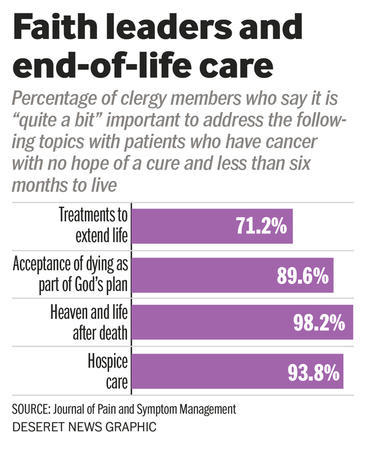 This research, as well as other findings from The National Clergy Project on End-of-Life Care, points to a need for ongoing education, according to health experts.

“Poor knowledge of end-of-life care may lead clergy to passively enable congregants with serious illness to pursue … treatments that are associated with increased suffering,” wrote researchers in the Journal of Palliative Medicine.

The National Clergy Project is part of Harvard University’s Initiative on Health, Religion and Spirituality. Program leaders are working on a free end-of-life care curriculum to empower faith leaders, highlighting the important role religion often plays at the end of people’s lives.

“What clergy say — and what they do not say — can make a major difference in whether believers experience a ‘good death,'” the Association of Religion Data Archives reported in its overview of recent research.

Increasingly, palliative care, which focuses on providing pain relief rather than a cure, is seen as a key part of dying well, yet many people, including pastors, find it difficult to give up on intense or invasive treatments.

Accepting that a cure isn’t possible “may be perceived as a decision that undermines one’s faith in a God who may intervene with a miracle through medical treatment,” wrote researchers in the Journal of Pain and Symptom Management.

These researchers and other experts at The National Clergy Project on End-of-Life Care don’t want to undermine religious beliefs. But they do want to ensure that faith leaders are informed about medical options before they influence a patient’s decisions.

“Our goal is for patients and families facing difficult medical decisions to receive better spiritual and medical care,” the project website notes.

Around 3 in 4 faith leaders are open to training on end-of-life care, recent research showed.

In addition to seeking out insights from medical professionals, members of the clergy may benefit from organizing conversations about death and dying within their communities. Rabbi Laura Geller, rabbi emeritus at Temple Emanuel of Beverly Hills, has done this as part of a broader effort to understand what people at her synagogue fear as they near retirement.

“The conversations were so rich and powerful that nobody wanted them to end,” she told the Deseret News last year.

Initial small-group discussions on life after retirement grew into a communitywide effort to better serve the needs of older synagogue members. People thought through how to emotionally and spiritually grow even as their bodies aged and illnesses loomed, Rabbi Geller said.

“How do you make meaning in the face of the fact that you’re going to die? That’s what faith communities are supposed to be teaching people,” she said.