Learning how to die

When Robert Fuller decided to die, it was a choice informed by personal experience.

Fuller, 75, suffered from terminal cancer. He started feeling sick in July 2018. By September, a CT scan found a tumor growing under his tongue. The news didn’t surprise him.

“I knew it was there,” Fuller said in April. “I could smell it.”

It was a sour scent, he said. More basic than acidic. He could smell it clearly when he was in bed, his face pressed against his pillow.

“I wrapped my head in a pillow trying to smell it. I wasn’t attempting to do anything else,” Fuller said. His body might be failing, but his humor was intact.

Fuller considered treating the cancer medically. He started a round of chemotherapy in January, but didn’t keep it up. As a nurse to the dying, he’d watched cancers take hold despite desperate attempts to hold the disease off.

In many cases, the supposed cure was as bad as, or worse than, the disease itself, he thought.

So, Fuller worked with a medical team to get access to life-ending drugs under Washington’s Death with Dignity Act. On May 10, surrounded by family, friends and some journalists, Fuller injected the drugs into his gastric tube and fell asleep. He would not wake up.

Fuller was able to die on his terms because he found doctors willing to help him and a pharmacy willing to procure or make the medicines he needed. But that isn’t always guaranteed.

The medical community is far from settled on the question of Death with Dignity or, more generically, physician-assisted suicide (PAS). The Code of Medical Ethics, a guide provided by the American Medical Association, opposes PAS, saying that it is “fundamentally incompatible with the physician’s role as a healer.” Add onto that a growing consolidation of medical services under Catholic organizations, run under the belief that suicide is a mortal sin, and the question of assisted dying rises from an ethical debate to a religious edict.

Doctors have covertly engaged in helping their terminal patients die for decades, but access to this style of care was based on relationships and stealth, not need or as a right. As the right-to-die movement expands to new states, advocates hope that will change.

Lay of the land
Only eight states and the District of Columbia afford people the right to die with the help of their physicians. New Jersey is the most recent after the state legislature passed a law similar to Washington’s in March.

Under those laws, physicians decide if they want to help their patients through the legally prescribed process. Some hospitals ban the practice outright. Individuals question their role. As a doctor, having sworn the Hippocratic Oath to “do no harm,” could that include prescribing death?

According to the Washington State Department of Health, 115 physicians and 51 pharmacies assisted 212 terminal patients in 2017 —  the last year for which numbers are available. The vast majority operate west of the Cascades. On average, only 10 percent of people who use the law live east of the mountains. 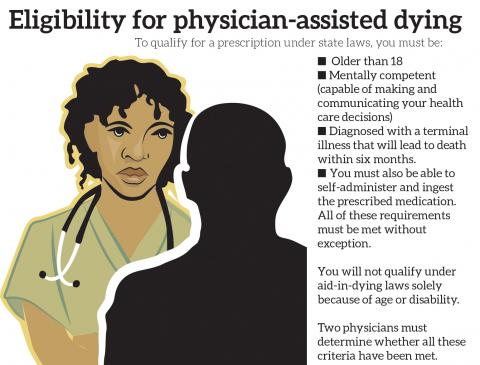 Much of that is related to access, since many of the health care facilities on the east side are associated with Catholic organizations, said Helene Starks, an associate professor of bioethics and humanities at the University of Washington who has studied assisted death for nearly 30 years.

“The fact is that the Catholic health systems are the primary providers in the state outside of the western side, and the non-Catholic organizations are more prevalent on the western side than eastern side,” Starks said.

The UW Medical system — which for these purposes primarily includes Harborview Medical Center, University of Washington Medical Center and Valley Medical Center — allows its doctors to participate in the Death with Dignity process.

Not all want to, however.

Mollie Forrester was the associate director of social work at Harborview Medical Center, and it fell largely on her team to help patients navigate the complexities of the Death with Dignity law. But, the patients weren’t the only ones who needed help.

“It has been a powerful experience to watch doctors get this request from patients,” Forrester said. “This idea of facilitating the hastened death is a process for them.”

Forrester started with the team soon after the law went into effect in 2009, on maybe the third or fourth case that the Harborview team dealt with. The idea was that their group would coordinate the implementation of Death with Dignity, and that once it was established they would farm out the work to social workers in different disciplines.

But Harborview saw so few cases that Forrester and her team ended up handling the care altogether.

It was up to Forrester to sit down with patients asking to end their own lives and explain to them the process and help them through any logistical hurdles that might arise. Their interview might be the last time she ever spoke to those patients.

Doctors needed help, too. Some refused to participate, flat out. With others, Forrester felt she was performing the role of social worker.

“From where I’m sitting, it’s easy,” she would tell them. “It’s my profession, patient autonomy and patient choice.

“They’re supposed to be healing and helping people live,” she said.

The ask
Death is the inevitable conclusion of life. Fuller knew that, had known that for a long time. He joined the Hemlock Society as a young man, a group that advocated for the right to die. The Washington state society was founded in 1988 as the AIDS epidemic ravaged the gay community.

“I believed in the cause before Kevorkian,” Fuller said, referencing Dr. Jack Kevorkian, the controversial physician who helped as many as 130 people to their ends. He was nicknamed “Dr. Death” by the media and was ultimately arrested and sentenced to up to 25 years in prison for second-degree murder. He got out in eight.

Arline Hinckley is a board member and volunteer for End of Life Washington. She and others in her organization offer advice to medical institutions and direct assistance to individuals who need help finding doctors or prescribing pharmacies. They may also be with the patients at their deaths.

“I feel like it’s a tremendous honor to be allowed in someone’s life at that very vulnerable time,” Hinckley said.

Hinckley’s second job out of graduate school in the 1970s was performing a social work role on a hematology/oncology team, caring for deeply ill patients.

“I saw a lot of people die very badly,” Hinckley said. “I was asked to help a person and I could not do that. I felt terrible, because they were suffering so greatly.”

Her experience led her to join the then-Hemlock Society.

“I have always felt that what happens to your body should be directed by you,” Hinckley said. “People deserve a choice. It’s not a choice everyone might make, but options are important to people.”

In fact, of the small number of people in Washington who use Death with Dignity in a year, as many as 30 percent never take the medications. Some got the prescription and never filled it. Others planned to, but died before they could get the medications.

The medications become almost a safety net, not because people want to die, but because that element of choice is important to them, Starks said.

“I’ve never met anybody in death with dignity who wanted to die,” Starks said. “They wanted to live a lot longer, but they also didn’t want to be a victim of their own illness.”

Even though it’s legal, it’s not easy to come by the medications that are necessary. Many people don’t know they have the option. Hospitals and pharmacies aren’t advertising that they provide these services.

In fact, a pharmacist who spoke to Real Change for this article did not want to be named at all.

“People judge you for the kind of activities that you’re doing and sometimes they equate that with good and evil,” the pharmacist said. “‘You must be evil because you’re providing this.’ Really? If you talk to this family that is suffering with this patient, that are looking for not a means to an end but an option at the end? You’re depriving them of options.”

Moving forward
The medical community is still grappling with PAS.

The issue came up before the American Medical Association in summer of 2018 and was effectively tabled rather than rejected or affirmed.

In November, the AMA’s House of Delegates deliberated a report from its Council on Ethical & Judicial Affairs (CEJA) that looked into the legal and ethical ramifications of PAS. The existing guidance in the Code of Medical Ethics remained unchanged, but delegates also voted to take the matter up at a future policy-making meeting.

Attitudes are changing. More than two-thirds of Americans believe that doctors should be allowed to help terminally ill patients who are in pain to die, according to a 2015 Gallup poll. Young adults were particularly supportive with 84 percent of people between 18 and 34 on board with the concept.

For some, the act is still seen as suicide. Robert Fuller believed differently.

“It’s taking responsibility for the rest of my life,” Fuller said.