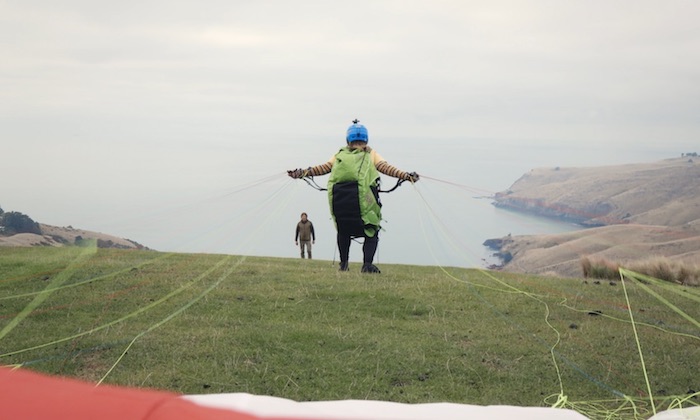 Some people say I was brave to fly. I tell them my Uncle Clive was the one who had courage.

He was diagnosed with terminal pancreatic cancer at the age of 50. He had no choice about dying. But he made a choice about how and when he wanted to die.

When I was funded by Loading Docs to make a personal documentary about Clive, I knew I had to challenge myself to do something adventurous, something he would do. He always loved to fly, so what better way to honour him than take to the sky myself and paraglide.

This year marks 10 years since he passed. I wanted to make a film that both honoured Clive’s memory for those who knew him, and shared his story with those who didn’t. In a year when New Zealanders are voting on the End of Life Choice Act, I believed the timing was right, and could offer insight to those that need it.

In preparation for the documentary, as well as the flight, I buried myself in my uncle’s legacy – as a photographer, an adventurer, a scientist and a spiritual seeker. I dug out his old photos and read the letters he wrote over his final year, letters that were integral to the making of this documentary. What struck me most was his courage in facing a terminal illness, dealing with his own loss, yet managing and helping others in their grieving too. Now that is brave.

Making this film I learnt a lot more than just whether or not I could fly. I discovered it’s not just about the big, bold moments when we are brave. It’s about things like kindness in the face of adversity, being able to laugh when things don’t go to plan, standing up for what you believe in and being honest with yourself and others.

Clive taught me that life is about the little adventures along the way. So much of life is out of our control – there will always be the possibility the wind direction might change. So for the days you can, you fly! And oh, how I flew. Up there, among the clouds, being a bird. I realised why I had to do this and it changed me forever.

It also helped me understand what it must have been like for Clive, to have been caged in his bed near the end, watching out his window as the wind blew the clouds across the sky. To have known it was a perfect day to fly, or just go for a walk, but not be able to. When you’re that close to dying, surely you must know a thing or two about living. Clive was always the wise one.

Through Clive’s life and his decision about how he died, when he had only days to live, I hope viewers will consider those who no longer have a choice about whether they die or not, who are asking for the right to die with dignity.

I also want to encourage everyone to read the Act before voting. It’s designed for those suffering from a terminal illness that is likely to end their life within six months, for those who have significant and ongoing decline in physical capability, who have unbearable suffering that cannot be eased, and who are able to make an informed decision about assisted dying. This law could bring real support for people who need it in their time of pain and suffering, and in doing so also provide support and care for those left behind.

My hope is that if I ever face terminal illness I can do it with as much courage and grace as my Uncle Clive. I also hope I’ll have a choice that affords me the dignity I deserve.