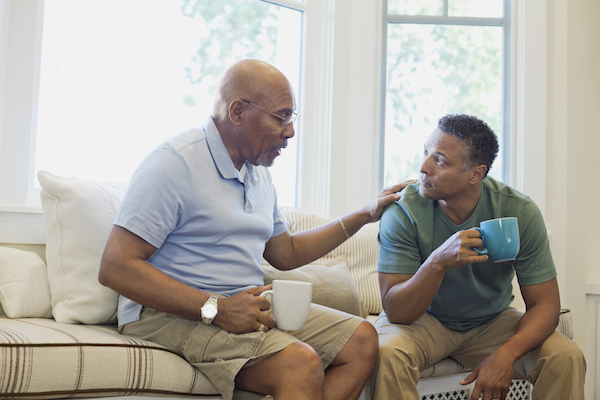 It’s important, nevertheless, to talk to people close to us about death and dying, so that when the time does come we know what their wishes are and how best to support them.

Also, telling family members what you want when it comes to that end-stage of life can make a difficult time easier for them.

Funeral directors constantly see families grappling with grief and having to make decisions when a special person to us has passed, and say having had “that conversation” can take away some of the pressure.
Dean Maxted, assistant manager at H Morris in Northcote, Auckland, says it not only helps with the logistics of organising a funeral, but also opens the door to getting people talking about matters that are important and have perhaps been left unsaid.

“Talking about personal preferences and what you would like when it comes to your funeral can be a really good conversation starter to all sorts of other big stuff,” says Dean. “It can lead to really valuable discussions that you might not have had otherwise.”

In some cases, it can help people come to terms with facing the inevitable and it can also strengthen bonds or mend fences. It may also be a chance to let go of long-held secrets that can weigh someone down.

And whether you’re having the conversation with someone living with a terminal illness or the subject has been raised because you know it is something that will have to be dealt with one day, it is important to pay attention to what the other person has to say.

“Death and dying is not a rational topic and people don’t always react how you think they will,” says Dean, who has seen people respond to facing death and the loss of someone they care about in just about every way possible during his years in the funeral business.

Then there are the huge range of emotions people can experience when they’re faced with dying. These include fear of what will happen and anger that their lives are being cut short, through to disappointment that they have not achieved what they wanted to. Some people are so worn down by illness and old age that they can’t wait to go. Others are very grateful for the care they’ve had and feel satisfied with their lot.

“No matter how they are feeling, the important thing is that you are talking about what they are going through and that they know they matter enough for someone to listen to them,” says Dean. “Taking that on board is as generous a thing as you can do for anyone.”

Tips on having a conversation about a tough subject

• Be sensitive to the needs of the other person. Raise the subject at an appropriate time and don’t be pushy if they don’t want to talk about it.

• If you find it difficult to handle having the conversation yourself, maybe there is someone else who can do it instead, for example a relative or friend, a minister or pastoral carer, or a counsellor.

• Write down their wishes. This is not only helpful for later on, but also shows that they are being listened to.

• Be respectful and calm.