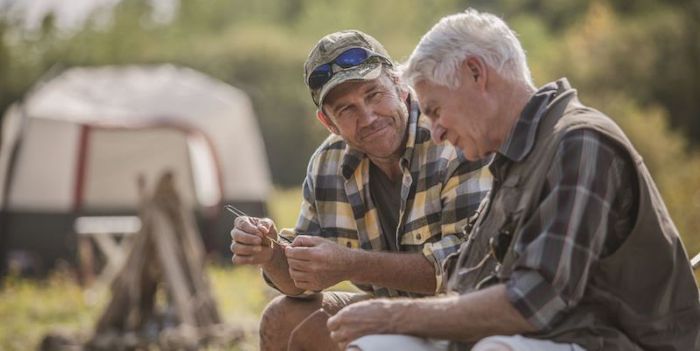 The average life expectancy in the United States is now 78.6 years old, according to the most recent data available from the Center for Disease Control (CDC). That’s almost two times what it was a century ago, when it was just 39.

While some might believe we’re on a path toward immortality, at least for now, death remains the one certain rite of passage that arrives for everyone eventually, and Dr. B.J. Miller believes a reckoning is in order.

“It’s high time to review the very common, boring truth that we’re all going to die,” says Miller, a hospice and palliative care physician whose TED Talk, “What Really Matters at the End of Life?” has been viewed more than one million times. The twist: More open conversations about death and dying may in fact help us all get more meaning out of life.

That’s one takeaway from Miller’s new book, A Beginner’s Guide to the End: Practical Advice for Living Life and Facing Death, co-written with Shoshana Berger. Part manual for practical stuff (like how to deal with the mountain of paperwork when someone passes) and more heart-centric subjects (like personal legacy and grieving for loved ones), the book is intended as a resource for anyone who will experience its subject matter, aka all of us. Prevention spoke with him about why talking about death talk is on the rise in the wider culture—and why it’s something to start discussing sooner than later.

We’re about to be the oldest, frailest population ever.

Americans have reached a pivotal population point. “We are about to be, in actual terms and relative terms, the oldest, frailest population ever,” says Miller. “Everyone’s going to be living with chronic illness, everyone’s going to be dying from chronic illness, in numbers we’ve never seen before.” Mass migration into retirement centers and care facilities isn’t the solution—but a more open, pragmatic dialog about quality of life and personal desires could be, Miller believes.

So, it’s time to develop a “relationship” with death.

There’s a reason talking to a sick loved one or sitting down to write a condolence letter can be so paralyzing.

“We don’t have the right language, or we worry we’ll say something at the wrong time and scare the person we’re talking to,” Miller says. His solution: “Think about it like a series of conversations, not a long-time talk.”

Discussing death in the abstract with someone when their health is good can also help you understand what they may want, and need, down the line; furthermore, it can empower you to articulate those things for yourself. Will those kinds of talks potentially make you anxious? Of course. But the aim is normalization over time—and that comes with a silver lining. “There’s a secret in the hospice world: Most people who do this kind of work and are around this subject a lot will probably tell you that their lives are better for it,” says Miller.

Listen to your loved ones.

Miller has observed that patients know more about what’s going on with their health than anyone else does—or that they may be letting on. A person might hesitate to bring up their thoughts about dying because it sounds like negative thinking. “The patient themselves is languishing, not knowing how to talk about it, or they don’t want to hurt their family’s feelings,” Miller says.

His advice is to “keep an eye out. The moment dad says, ‘I’m not sure about this treatment,’ or [mom] starts talking a lot about God,” give them the opportunity to follow that thread. You can come at the conversation from a philosophical or spiritual angle, focusing on beliefs or fears, but the point is to listen and hear them out. “When they crack the window, dare to enter it.”

Miller has seen caregivers lose their jobs, drain their bank accounts, and undermine the financial stability of their own families. “It’s as though bankrupting yourself for a loved one is the currency to show how much you care, even though everyone in the mix knows the person is going to be dying,” he says. But while you can’t place a monetary value on a life, it’s okay to keep money in the conversation. “Invite this variable into the mix in a conversation with your doctor,” says Miller. “It’s not just the medication or the pacemaker. It’s the cost of living with this thing.”

Furthermore, he adds: “Our healthcare system is wired to extend bodily life at all costs, and as our technologies have improved you can prop up a body practically indefinitely,” Miller says. “As patients—as people—you have to upend the medical system. You have to disrupt it and say ‘no thanks.’ Otherwise you’ll land in ICUs with tubes in every orifice and your family has got to decide how to schedule unplugging you.”

Ask yourself: Can I afford to die?

“Our commercial world, our health and benefits—all of it shows this huge design flaw: Dying is not baked into the plan,” says Miller. “We tried to erase it and it can’t be erased.” The result: a framework, from retirement saving plans to health insurance programs, that don’t include the costs associated with death in the picture. Which means: “You need to save more than you think you do—sock away money.”

Bear in mind what’s covered, too. An experimental treatment could be entirely out of pocket, while hospice is highly subsidized. At the end of the day: “It’s about harm reduction. You’ve got two shitty options. But a less shitty option is better, and that could make an important difference.”

Think out of the box about legacy.

“Selfish people do not tend to die happy because they can’t see the world outside themselves,” Miller says. Learning to do that—to care about the world beyond your presence in it—can help us all become kinder people, but it can also help frame thoughts about what you want to leave behind.

Miller is referring to legacy, which might be the best shot we get at immortality. But while we tend to immediately jump to monetary donations, it can be any mark on the world you’ve left behind. Miller tells a story about a man who used to sit out on his front porch and wave at everyone who went by; when he passed, “the whole neighborhood changed, just because that guy wasn’t out there waving.” The bottom line: “You’re going to affect people, no matter what you do.” So try to leave behind something they will remember with a smile.