“People become frightened at the end of life. Sometimes I see them moving away from friends as they get sicker.” 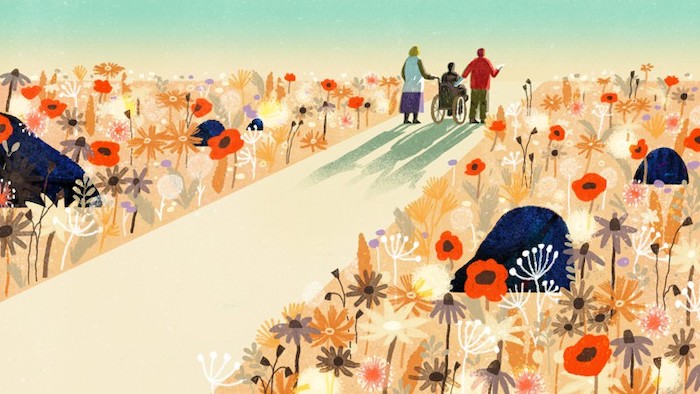 Julie Beck talks with two women who met through the nontheistic religion of Ethical Culture and have spent a significant amount of time ministering to aging and dying members of their congregation. They discuss how friendship changes at the end of life, and how they work to foster connection and community for members of all ages.

This interview has been edited and condensed for clarity.

Julie Beck: How did you two meet and begin ministering to the dying together?

Anne Klaeysen: Liz became a member of the New York society maybe seven years ago. I am always at the monthly newcomer reception, so we met there. She just dove right in, and shortly became the president of the board. I have to confess, Liz, I get a little worried when people dive in so quickly. I’m thinking, Oh dear, is she going to drown? Liz did not drown; she’s a strong swimmer. Liz came at a time when we really needed strong leadership. And she wasn’t afraid to take on a couple of the old boys. So I think there was certainly a feminist bond there. [We became] partners in crime, or [rather] partners in good works.strong>Liz Singer: We have a strong aging population. I think 30 percent of our members are probably over 70. And we started to see things like dementia. As Anne and I developed our friendship, we began having conversations on the very delicate process of aging and navigating our roles with the members.

Anne: Liz is a geriatric-care manager. Her expertise in this field was invaluable, but I was a little concerned because I didn’t want to take advantage of her. Members don’t mean to take advantage, but sometimes they do.

Also, our members are humanists. We’re a nontheistic religion of ethics. So most of our members don’t believe in a supernatural deity, nor in an afterlife. And they’re fiercely independent. One of our challenges has been to get them to tell us when they’re going through something. Very often we find out about things after they’re in the hospital. It’s not that they don’t trust us; they have a real fear of losing their dignity.

Another society member, Barbara Simpson, runs something called the Death Café. That’s an opportunity for folks to come and really speak about living. We know that we are mortal, and the gift of that is we can live life more completely and in connection with each other. It’s really a joyful experience for [our members]. Barbara has said that very often people are comfortable talking about [mortality], but their children aren’t. [They’ll say], “No, Mom, you’re never going to die; you’re not going to die yet.” People may have their life in order, their papers in order, but their children are in denial.

Beck: Was there a turning point where you went from having a collegial relationship to more of a friendship?

Liz: The turning point was probably our first serious case, five or six years ago. There was a woman who was estranged from her daughter. Very stubborn. We were trying to bring the daughter back into the picture and make that relationship communicative. Because it was so difficult, Anne and I had to talk about it all the time. The trick was for Anne and I to work together very closely. Anne was having lunch with [the older woman], and gaining her trust. And I was trying to bring in oversight without activating her stubbornness.

Anne: [The woman] left the society for a while because she didn’t get along with people. People didn’t quite come up to her standards. When she came back I was thinking, How can we help her to fit in? How can we help her not be so judgmental? One really good connection was with the children [in our congregation]. I suggested that she come meet with the children, and tell them about her experience. She was a Holocaust survivor; she was on the kindertransport train from Germany to England. I wanted her to be connected with the children, because she was estranged from her own daughter. And she was kind of prickly around some of the adults. The children were so appreciative, and so affectionate with her. They wrote to her when she wasn’t well. They drew her pictures. That’s another thing that a community can do when it’s intergenerational: connect at all ages of one’s life.

Beck: Being with people at the end of life is very intense work. You are regularly seeing a part of life that a lot of people don’t see, or see very rarely. How do you feel that affects your relationships generally and your friendship specifically?

Anne: Generally I have a great appreciation for what the elderly are going through. A big challenge with one of our members was the lack of understanding among hospice and health-care staff for people who are humanists, who don’t believe in God, and don’t believe in an afterlife. It was really difficult for this person when others around her were saying, “Oh, don’t be afraid. God loves you.”

I’ve been on different panels to try to train people not to assume that they are caring for God-fearing people. Just listen to these people. Even when they have dementia. They may not know where they are, they may not remember things, but you’ve got to listen.

Liz: How does it affect my personal life? Number one, it [gives me] an appreciation for life. Number two, I have a reputation when I go to dinner parties. Don’t bring up any questions about aging or I’ll get on a soapbox.

Beck: You mentioned that sometimes you are ministering to people who are your friends, which I imagine is very special, but at the same time could make the balance harder.

Anne: It does. Keeping our work separate from [our personal lives] is a challenge. Where do you draw the line for someone who’s a friend and someone that you’re pastoring to in a professional capacity? But there’s a part of me that wants my life to be integrated. You don’t want to compartmentalize, but you also don’t want to become so involved that you lose perspective. One thing Liz and I do in our friendship is try to help each other keep that balance.

Beck: Is there anything that you’ve observed about how friendship changes at the end of life?

Liz: People become frightened at the end of life. Sometimes I see them moving away from friends as they get sicker. Once people get past that fear of what’s going on, they can be friends again.

Anne: Partly, [what changes is] a sense of loss. My dad died at 101. He was hale and hearty up until the end, and very sound of mind. I remember him saying that all of his friends had died on him. But because he was hard of hearing, it was difficult for him to make new friends. I think a lot of the infirmities that are experienced in advanced age make it difficult to make new friends. Often at the New York society, I see people who become a member after a spouse has died. They’re grateful to have a group of people with whom they can socialize.

I don’t want to sound stereotypical here, but women have been raised to develop those social skills. Men have very often relied on women to do that for them. What we find is that, in the aging population, women are able to cope better. Men who have relied on a spouse or a girlfriend lack those skills. They prefer to have a woman in their lives who can do that for them. That’s the way they were raised. It’s really difficult for them.

Liz: [Anne and I have] skills around dealing with very deep conversations, where a lot of people don’t want to go.

Anne: Of course we’ve also had a lot of challenges in this political atmosphere of, How do you hear somebody with whom you profoundly disagree? We’ve seen that with members who may not be on speaking terms with family or friends. A lot of the work that we do is about—no matter what age somebody is—having respect for human worth, and seeing the other person as a full person.

Liz, you and I had a little rocky time when we weren’t really understanding each other.

Liz: It had to do with some organizational issues at the society. It was very political.

Anne: I thought, I’m going to assume that this is a misunderstanding. We just really need to go back and listen more carefully. What I really appreciated about Liz was that she not only listened to me but she also checked in with other Ethical Culture clergy. I really appreciated not only the deep listening, but also her checking to see, What’s the bigger story here? I think that comes back to being a religion of ethics. Friendships take work. And a lot of people aren’t willing to do that.