A study from Portugal analyzing the reactions of feral horses to the loss of herdmates has lessons about the emotions and intelligence of all horses. 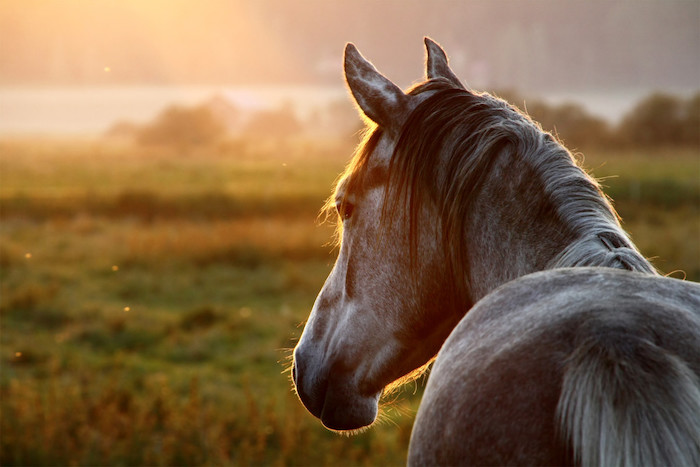 A sad event provided researchers in Portugal with a rare opportunity to observe how feral horses react to the death of a herd mate and to collect data that may advance understanding of emotions and intelligence in all horses.

Scientists from the University of Coimbra in Portugal and Kyoto University in Japan were doing routine fieldwork, observing a feral herd, when they noticed a 2-month-old foal whose hind legs had been severely injured in a presumed wolf attack.

“We started to work with this horse population in the north of Portugal in 2016,” says Renata Mendonça, PhD. “Every year in the breeding season, from April to July we conduct fieldwork. We are almost every day in the field following and observing horses’ behavior from morning to late afternoon. Additionally, this population is subjected to predation pressure from the Iberian wolf, and for the past two years, foal mortality has reached almost 100 percent and we believe it is mainly due to wolf predation. These two factors combined increased our chance to observe this event.”

The researchers watched the foal for nearly six hours, making notes on his behavior as well as that of his dam and other members of the herd in his vicinity. They noted the activity of the nearby horses—such as feeding moving, resting or social interactions—every five minutes and documented the approximate distance between all the observable horses and the injured foal every two minutes.

For the first several hours, the herd was walking, but the foal moved only when prompted by his dam. Eventually, the foal went down and was unable to stand. His dam stayed close by grazing and occasionally nuzzling the foal. About 15 minutes later, the herd began to move again, leaving the dam and foal behind. The stallion returned to the dam soon after and attempted to herd her away from the foal. After the seventh attempt, he was successful and the dam left, whinnying to the foal 10 total times during the separation. The foal responded only once.

A few minutes later, a second group of horses arrived in the area and remained within 20 yards of the foal for about 40 minutes. All the group members initially showed interest in the foal, but most eventually started feeding nearby. Two adult females, however, remained interested and licked and sniffed the foal for several minutes. The foal’s dam watched this interaction from a distance and whinnied 44 times, but the stallion prevented her from approaching. The foal responded only once, after the other adult mares had left.

The foal’s dam briefly returned to his side later in the day and clashed with bachelor stallions who showed an interest in her, but not the foal. Eventually, the dam moved away from the foal to join the herd, which was 200 meters away. The foal stood three minutes after she left but fell twice and made no further attempts to follow. The researchers estimate he died about an hour later.

Although conceding that it was difficult to watch these events unfold, Mendonça says researchers must try to avoid interfering with animals in the wild. “It is always hard for us to see our subjects of research get injured or die,” she says, “and our first instinct is to call for help or try to intervene. However, when we are dealing with natural causes, as in this case, we try as much as possible not to intervene. We have to think about the complex environmental and trophic interactions that are occurring and can benefit from such a loss. A carcass is a food resource for other animals, scavengers, which depend on them to survive and to feed their offspring (which were born in the same season), such as wolves, foxes, crows and wild boars.”

Mendonça says that the dam leaving her foal may seem heartbreaking, but it makes sense in evolutionary context. “Ensuring her own survival seems to be a priority for the mothers in the animal kingdom, in general, even if the mother-infant bond is the strongest bond established among individuals. While a mother can produce offspring every year (in the case of horses), developing, growing and reaching sexual maturity requires a lot of time and has a lot of costs, so, for the benefit of the species, it is more advantageous, and less costly, if mothers prioritized their survival over their offspring’s,” she says, adding, “The constant harassment by the two bachelor males could have hastened the abandonment of the foal. The situation might have been different if she had been alone with her foal.”

More difficult to understand, says Mendonça, was the attention the two unfamiliar adult mares gave the dying foal. “I was surprised by the reaction of the unrelated females toward the injured foal,” she says. “Usually adult mares and stallions behave agonistically toward foals from other groups. These agonistic interactions (e.g., chasing and bite threats) are observed when foals get lost from their band and approach other groups while seeking their own or when foals are lying down far away from their group and other groups approach. Showing affiliative behaviors, instead of agonistic as expected considering previous scenarios, could mean that the horses somehow perceived that the foal’s condition was unusual.”

As for the broader question of how horses perceive death, much more remains to be learned, but in the meantime it’s advisable to take equine emotions and reactions into account when managing domesticated horses.

“Some studies suggest that [after the death of a herdmate], horses show signs of anxiety, cessation of feeding and social withdrawal,” Mendonça says. “Therefore, it is important to consider horses’ needs when they are facing a situation of loss before asking them to complete or perform their daily tasks.”