In William Blake’s engravings for the Book of Job I found a powerful lesson about grief and attachment.

If grief could be calculated strictly in the number of lives lost — to war, disease, natural disaster — then this time surely ranks as one of the most sorrowful in United States history.

As the nation passes the grim milestone of 200,000 deaths from Covid-19 — only the Civil War, the 1918 flu pandemic and World War II took more American lives — we know that the grieving has only just begun. It will continue with loss of jobs and social structures; routines and ways of life that have been interrupted may never return. For many, the loss may seem too swift, too great and too much to bear, each story to some degree a modern version of the biblical trials of Job.

I thought of the biblical story of Job last month when I was asked to speak to the National Partnership for Hospice Innovation. How would I counsel others to cope with losses so terrifying and unfair? How could those grieving find a sense of hope or meaning on the other side of that loss?

In my research I found myself drawn to the powerful rendition of the Book of Job by the 18th-century British poet, artist and mystic William Blake, in particular his collection of 22 engravings, completed in 1823, that include beautiful calligraphy of biblical verses.

Job, of course, is the Bible’s best-known sufferer. His bounty — home, children, livestock — is taken cruelly from him as a test of faith devised by Satan and carried out by God. He suffers both mental and physical illness; Satan covers him in painful boils.

Job is conflicted — at times he still has his faith and trusts in God’s wisdom, and other times he questions whether God is corrupt. Finally, he demands an explanation. God then allows Job to accompany him on a tour of the vast universe where it becomes clear that the universe in which he exists is more complex than the human mind could ever comprehend.

Though Job still doesn’t have an explanation for his suffering, he has gained some peace; he’s humbled. Then God returns all that Job has lost. So, the story is, in large part, about the power of one man’s faith. But that’s not all. 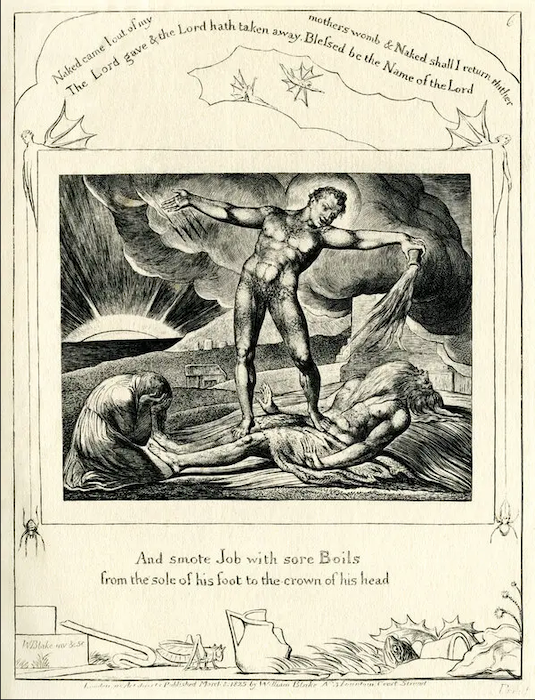 The verses Blake chooses to inscribe on his illustrations suggest there’s more. In the first engraving we see Job’s abundance. Plate 6 includes the verse: “Naked came I out of my mother’s womb, and naked shall I return thither: The Lord gave, and the Lord hath taken away.”

So, the Book of Job isn’t just about grief or just about faith. It’s also about our attachments — to our identities, our faith, the possessions and people we have in our lives. Grief is a symptom of letting go when we don’t want to. Understanding that attachment is the root of suffering — an idea also central to Buddhism — can give us a glimpse of what many of us might be feeling during this time.

We can recall the early days of the pandemic with precision; rites that weave the tapestry of life — jobs, celebrations, trips — now canceled. In our minds we see loved ones who will never return. Even our mourning is subject to this same grief, as funerals are much different now. 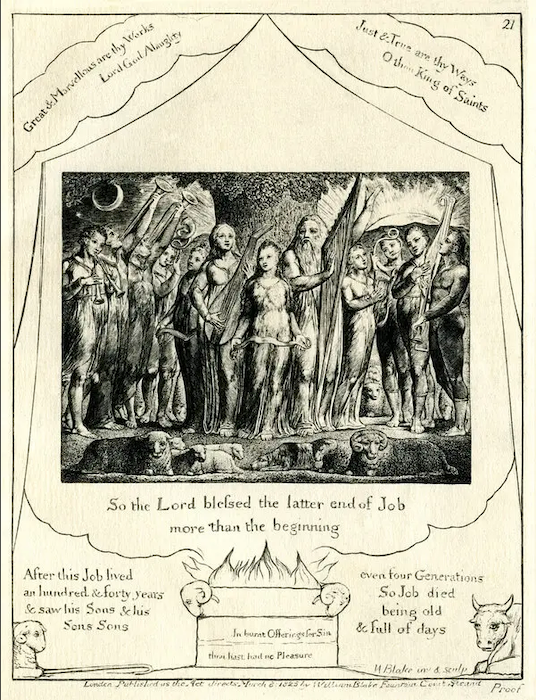 In Blake’s penultimate illustration in this series Job is pictured with his daughters. Notably Blake doesn’t write out this verse from Job; instead he writes something from Psalm 139: “How precious also are thy thoughts unto me, O God! How great is the sum of them!” In the very last image, however, God has returned all he had taken from Job — children, animals, home, health and more. Here, Blake encapsulates Job 42:12: “So the Lord blessed the latter end of Job more than his beginning: for he had 14,000 sheep, and 6,000 camels, and 1,000 yoke of oxen, and 1,000 donkeys.”

Blake intentionally didn’t make the last image a carbon copy of the first, likely in order to reflect new wisdom: an understanding that we are more than just our attachments. The sun is rising, trumpets are playing, all signifying redemption. Job became a fundamentally changed man after being tested to his core. He has accepted that life is unpredictable and loss is inevitable. Everything is temporary and the only constant, paradoxically, is this state of change.

So, where does all of this leave us now, as we think back to how our attachments have fueled our grief, but perhaps also our faith in what’s to come? Can we look forward to a healthier, more just world? Evolution can sometimes look like destruction to the untrained eye.

I think it leaves us with a challenge, to treat our attachments not simply as the root of suffering but as fuel that, when lost, can propel us forward as opposed to keeping us tethered to our past. We can accept the tragedy and pain secondary to our attachments as part of a life well lived, and well loved, and treat our memories of our past “normal” as pathways to purpose as we move forward. We still honor our old lives, those we lost, our previous selves, but remain open to what might come. Creating meaning from tragedy is a uniquely human form of spiritual alchemy.

As difficult as it is now, in the midst of a pandemic, it is possible — in fact, probable — that after this cycle of pain we feel as individuals and collectively that we might emerge with a greater understanding of ourselves, faith (if you’re a person of faith), and our purpose.

The word “healing” is derived from the word “whole.” Healing then is a return to “wholeness” — not a return to “sameness.” Those who work in hospice know this well — the dying can be healed in the act of dying. But we don’t typically equate healing with death.

Ultimately, to me, that’s the lesson offered by Blake’s Job: understanding his role in a wider universe and cosmos, transformed in his surrender, and the release from the attachments to his old life. Job had the benefit of journeying across the universe to understand his life in a larger context.

We don’t. But we do have the benefit of being his apprentices as we begin to emerge from this period, and begin to choose whether it propels us forward or keeps us stuck in pain, and in the past.