I found myself opening up to strangers about death and finding a sense of comfort in the process. 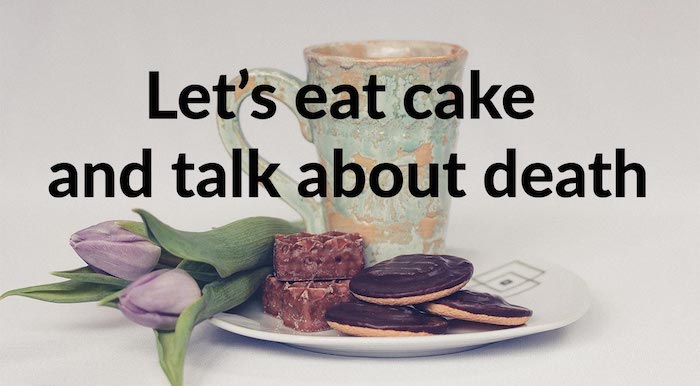 On the last day of my grandmother’s life six years ago in fall 2014, I hugged her goodbye after an afternoon at my grandparents’ home in South Florida and expected to see her for lunch the following day. However, I woke up the next morning to the news that my grandmother had died suddenly in her sleep. Instead of meeting up for lunch, my family called to make funeral arrangements. I rescheduled my flight and figured out bereavement days with my job at the time. Because I was on vacation, I thankfully had time to spend with my grandmother during her last unexpected days. The shock from finding out she had died lasted through the week and well beyond her funeral.

After her death, I flew back to New York City to return to what remained of my old life. I’d wanted to leave everything I knew and loved behind and embark on an adventure to a place where I knew no one and recognized nothing. In winter 2015 I’d finally had enough courage and money saved up to visit Iceland on a solo trip for my grandmother’s belated deathiversary. I didn’t expect to find a group of Americans and road trip around the southern coast of Iceland and fall in love with traveling alone, a new part of my life my grandmother will never know.

Every year since my grandmother’s death, without fail, I panic around her deathiversary. How could I commemorate her and the impact she had on my life? In the years since Iceland, I’ve talked with family, went to yoga and stayed low-key. In 2018, four years after she died, I thought I’d go on another solo trip because I wasn’t working and had the time to travel.

However, instead of traveling, I did something different and more close to home. I attended a Death Cafe, where strangers gathered together to talk about death in a supportive environment, at a cemetery in Brooklyn on a cold autumn weeknight. I was intrigued about going to a cemetery where the topic of conversation revolved around death. It wasn’t like death was a hot topic of conversation for small talk, so I didn’t really have the opportunity to bring up death on a whim to friends and family, specifically my grandmother’s death, which happened years ago. I wasn’t sure what to expect or how much I would even talk about such an intimate part of my life with people I didn’t know. Once inside the crematory’s chapel, I noticed a small group of people gathered around trays of cookies and water bottles. The director introduced herself and the backstory of the Death Cafe and then separated us into smaller groups.

My group chose a private back room with urns lining the walls. We pulled our chairs together in a circle and introduced ourselves. The conversation started with why we were there and why we decided to attend a Death Cafe and then expanded to religion, stories of loved ones and friends and their passing and then to the beyond: What happens after we die? Is it good that we don’t know what happens? What would happen if we did? One girl asked how grief changes over time, and how grief changes people. We sat in reflective silence and I thought about the week after my grandmother died when I needed to be around only close friends and family. All of my senses had been muted. I lived life that week in quiet contemplation surrounded by familiarity, the exact opposite experience I was having at the Death Cafe: alone and surrounded by strangers.

After we rejoined the main group, the organizer shared two poems about death with us before concluding the Death Cafe. I felt a sense of peace at having talked about my grandmother to a group of strangers and keeping my memory of her alive. After my grandmother’s death, I was so angry at how she died. The director spoke of a good death and what that means, and my mom, after my grandmother died, had also mentioned that it was a good death. I’ve realized I was upset at the way my grandmother passed and, in a way, of our unfinished conversation. Never saying goodbye and never having that final lunch together.

In the years since my grandmother’s death, I needed to confront my ideas about life, death and everything in between and beyond. I needed the space to talk to people who hadn’t moved on because they didn’t have a starting point to move on from. I found myself opening up to these people and becoming more intimate the further our conversations progressed. After all, how do we talk about death when death is such a taboo topic to talk about?

My grandmother’s presence is still here, in the jewelry and pictures and memories left behind. Attending a Death Cafe provided a space of comfort and allowed me to talk openly and freely about my thoughts and feelings to strangers, and since then, family and friends, about all aspects of death in an open manner. My grandmother’s deathiversary, I’ve come to realize after leaving the Death Cafe, is another day that comes and goes with the passing of time. While my grandmother’s death came as a shock, the ending of her life came, as my mom said, as a mercy to her. A good death to a good person, and these realizations came from open conversations about death.