American psychologist Herman Feifel was born in Brooklyn, New York, on November 4, 1915. He is internationally recognized as a pioneering figure in the modern death movement. His personal and research efforts helped break the prevailing taboo that discouraged scientific study of death and dying. His work transformed the way people think about death, treat the dying and bereaved, and view their own lives. 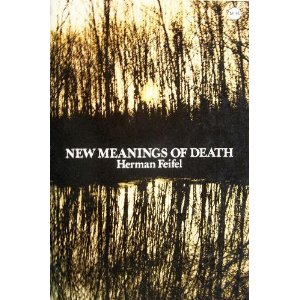 Feifel was educated in the New York City school system. His interest in psychology was stimulated during his undergraduate years at the City College of New York by John Gray Peatman, and later by Irving Lorge at Columbia University, where he received his master of art’s degree in 1939. World War II became a reality before Feifel could finish his doctorate. He enlisted in the Army Air Corps (now, the Air Force) in 1942, where he worked first as an aviation psychologist and later as a clinical psychologist treating combat soldiers overseas. While assigned to the Island of Tinian in 1945 he watched the Enola Gay take off to bomb the Japanese city of Hiroshima, an event that ushered in the age of atomic warfare. Feifel later reflected that this event and the death of his mother in 1952 were the two most important influences that catalyzed his interest in thanatology.

When the war ended Feifel resumed his studies at Columbia University, and finished his doctorate in 1948. He joined the Winter General Veterans Administration (VA) Hospital/Menninger School of Psychiatry group in Topeka, Kansas, in 1950, an event that marked the beginning of a long and illustrious association with the VA.

In 1954 Feifel accepted an invitation to join the Los Angeles VA Mental Hygiene Clinic. In 1960 he assumed the position of chief psychologist, an office he held until his retirement in 1992. Since 1958 he has additionally held an appointment at the University of Southern California School of Medicine, where he is emeritus clinical professor of psychiatry and the behavioral sciences.

Feifel’s dissatisfaction with psychology’s neglect of the existential richness of life, including the everyday matters of death and dying, coalesced in the 1950s. A major consequence was his focus on what has since become known as the field of thanatology. In 1959 he edited the book The Meaning of Death, which authorities agree was the single most important work that galvanized the scholarly community concerning dying, death, and bereavement. In this and related areas (e.g., gerontology, personality, psychotherapy, religious experience) his publications encompass more than 125 articles and chapters, as well as two books. Many of his literary contributions are focused on dispelling myths held by scientists and practitioners about death, the most injurious of which is a denial of its importance for human behavior.

Feifel’s empirical contributions are most influential in the areas of death attitudes, death anxiety, and coping with life-threatening illness. By the late 1990s scholars identified over 1,000 published studies in these areas, and recognized Feifel as being the only person to contribute seminal papers in five consecutive decades. He shaped the direction of this research by arguing for reliable and valid measures that acknowledge the multidimensional, multifaceted nature of death attitudes and fears, the importance of death attitudes in shaping a wide variety of behaviors, and the need to study death issues among those actually facing life-threatening circumstances. His research demonstrated that fear of death can exist differently on conscious and nonconscious levels, and helped establish that people may use different coping strategies when faced with life-threatening versus non-life-threatening situations.

For his work in thanatology, Feifel has received numerous accolades, including an honorary doctorate from the University of Judaism (1984), a Distinguished Death Educator Award (1990), the Distinguished Professional Contributions to Knowledge Award by the American Psychological Association (1988), and a Gold Medal for Life Achievement in the Practice of Psychology by the American Psychological Foundation (2001).