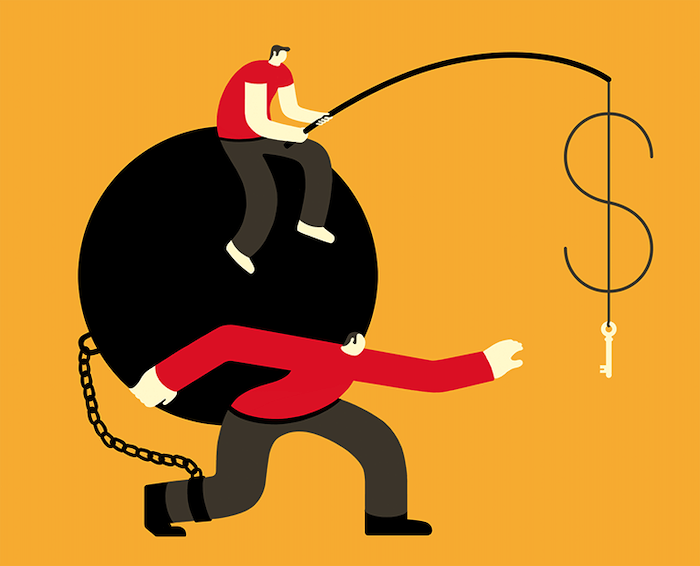 It’s not unusual for a person to pass away and leave behind some unpaid debt.

For the heirs — typically the surviving spouse or children — the question often is what, exactly, happens to those obligations. The answer: It depends on both the type of debt and the laws of the state.

A person’s assets — no matter how meager or massive — become their “estate” at death. That includes their financial accounts, possessions and real estate. And, generally speaking, it’s the estate that creditors go after when they try to collect money that they’re owed.

“Fortunately for surviving spouses or other beneficiaries, in most cases that debt isn’t something they’d be responsible for,” said certified financial planner Shon Anderson, president of Anderson Financial Strategies in Dayton, Ohio.

However, there are some exceptions.

First, though, some basics.

The process of paying off all your debt after your death and then distributing any remaining assets from your estate to heirs is called probate. Each state has its own laws governing how long creditors have to make a claim against the estate during that time. In some places it’s a few months. In other states, the process can last a couple of years.

Each state also has its own set of rules for prioritizing debt that should be paid from the estate, said Steven Mignogna, a fellow with the American College of Trust and Estate Counsel.

“In most states, funeral expenses take priority, then the cost of administering the estate, then taxes and then most states include hospital and medical bills,” Mignogna said.

However, he added, not all of a person’s assets necessarily are counted as part of an estate for probate purposes.

For instance, with life insurance policies and qualified retirement accounts (e.g., a 401(k) or individual retirement account), those assets go directly to the person named as the beneficiary and are not subject to probate. Additionally, assets placed in certain types of trusts also pass on outside of probate, as does jointly owned property (e.g., a house) as long as it is titled properly.

In fact, a person could pass away with an insolvent estate — that is, one lacking the means to pay off its liabilities — and yet have passed on assets that didn’t go through probate and generally can’t be touched by creditors.

However, a handful of states have “community property” laws, which make debt at death a bit more complex.

Generally, those states view both assets and certain debt that accumulated during the marriage as equally owned by each spouse — meaning a surviving spouse could be responsible for paying back the debt, even if it was only in the decedent’s name.

“Debt that couldn’t have been avoided during the marriage — like medical expenses or a mortgage — generally becomes the responsibility of the surviving spouse in community property states,” said CFP Bill Simonet, principal advisor at Simonet Financial Group in Kyle, Texas.

Yet that doesn’t mean you’d have to pay all of it, he said.

“A well-structured letter with a copy of the death certificate can lead to debt being discharged,” Simonet said. “In the probate process, you let the company know the estate has little to no assets to cover the debt and you ask that it be forgiven.”

Also, any time you jointly own debt — i.e., you cosigned a loan — you’re expected to continue paying if the other person passes away.

“You can ask for debt you cosigned to be forgiven, but don’t expect the request to work,” Simonet said.

It’s worth noting that federal student loans, unlike most forms of debt, are forgiven if the student dies. Parent PLUS loans — often held by parents to help pay for education expenses not covered by other forms of financial aid — are discharged if either the student or the parent who took out the loan passes away.