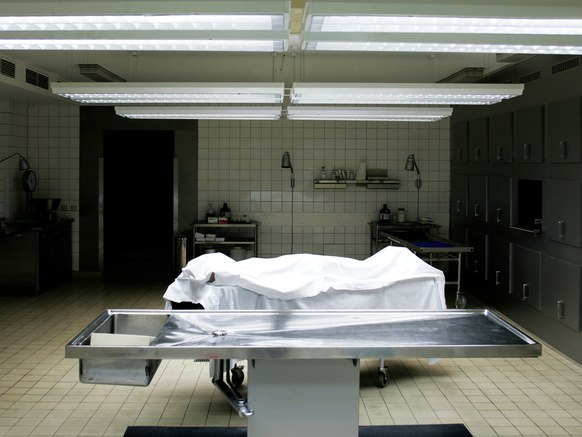 Each Monday night for eight weeks, the group of aspiring physicians, pharmacists, social workers, medical ethicists and other future health care professionals met for three hours to talk about death — for the purpose of being better able to talk about death.

The 33 post-graduate students and other trainees spent time at a residential hospice, hospital and nursing home. They heard from palliative care doctors, geriatricians and other specialists. They talked with relatives of those who had died. They practiced end-of-life conversations with one another.

And by their last meeting this month, the participants in the Death & Dying Fellowship of the Jewish Healthcare Foundation learned how to broach a difficult topic with terminally ill patients and those individuals’ loved ones — a topic for which their formal studies typically provided minimal preparation.

“When you’re in front of a family crying their eyes out, it’s a whole different game,” said participant Tamara Means, a former medical resident who admitted that her past nervousness addressing such issues probably only made things worse for some seriously ill patients.

She and others learned during two months how, among other things, to listen better to patients and families; to look for cues that they’re ready to face up to mortality; to bring up death-related discussion in a non-judgmental way that respects different cultural values; to be able to consider emotions in addition to medical skills and technology.

The fellowship is one of a variety of Jewish Healthcare Foundation programs intended to promote a better end-of-life experience, including more personal planning and decision-making by those affected. The foundation’s officials believe the medical profession needs to do more to help patients address the potential failure of curative treatment, with too little taught about end-of-life conversations in medical school.

If existing practitioners won’t take the lead in helping seriously ill people prepare for their final stage of life, the foundation is counting on the field’s newcomers to do so. Since launching the annual Death & Dying Fellowship for that purpose five years ago, the program has drawn far more interest than officials anticipated, with all of its available slots filled again this year.

“You’re our apostles — 30 to 35 people who will go out and help hundreds of others learn how to talk about death and end-of-life,” foundation president Karen Wolk Feinstein told them April 1.

“There’s a lot more that can and should be done” in the way of core training in school, Michael Barkowski, a second-year medical resident at Allegheny General Hospital, agreed afterward while citing the confidence he gained from the fellowship program. “No matter what field we go into, we’re all going to work with patients who have chronic diseases and end-of-life illnesses.”

Some 2.7 million Americans die each year, and most die under medical supervision in a hospital or nursing home rather than in their own residence. Those who die at home have frequently been hospitalized late in life themselves.

So most individuals have interacted with medical professionals before death, but the fellowship program’s instructors say both sides often ignore end-of-life discussion, such as how much intensive treatment a patient would want if there’s minimal chance of benefit.

It’s easier to just avoid a topic that makes everyone uneasy, Robert Arnold, medical director of the UPMC Palliative and Supportive Institute, told the fellows at their final session. He noted that patients are fearful about the end of their lives and doctors lack incentives to discuss it.

“We collude not to talk about it,” he said, although palliative care specialists such as he have more time and training for that purpose.

“There’s nothing natural about this,” Dr. Arnold said while coaching his young listeners to make end-of-life care part of their professional “identity.”

They should be good listeners as to the expectations of patients and families, he said, and then offer themselves as guides to the decision-making that eventually will be required. Their knowledge, if shared properly, can assist patients in weighing the merits of more procedures versus more comfort.

Alexandria Abdalla, who is pursuing a master’s degree in bioethics from the University of Pittsburgh, said she always has had a fascination with death but knew little before the program about how to discuss it professionally. She said she has learned how to “read between the lines” of what patients are saying and acknowledge their emotions.

She put that to use recently when shadowing a geriatric oncology doctor at one of UPMC’s hospitals. Ms. Abdalla was left alone with an elderly woman temporarily after the doctor left her room. The patient mentioned her fears about her prognosis, and instead of trying to talk her out of it, Ms. Abdalla simply listened.

“Then I told her, ‘I’m sorry what you’re going through is so difficult — I wish we weren’t in this position,’” Ms. Abdalla said. “She seemed to appreciate just having someone to listen.”

Dr. Barkowski, the 29-year-old AGH resident who plans to specialize in palliative care, said he now better understands how to build relationships with patients prior to such a serious conversation. In a recent visit with a family in the hospital’s intensive care unit, he sought no quick responses when laying out the options for an elderly woman with advanced breast cancer.

“I went into it without any agenda like previously, when I might have wanted a decision within one meeting,” he said. “We talked every day for the next few days. … We were journeying together, like Dr. Arnold was saying — you’re an educated guide helping them understand the medical things happening, how severe things are, what the limits are of what we can do, learning about the patient’s values and aligning treatment with those.”

Ultimately, a decision was made to discontinue treatment — the patient had reached the point of requiring kidney dialysis on top of other issues — but it was in a manner that her family understood, accepting it as the right decision for the patient, who died within days.

“It’s all about building trust,” Dr. Barkowski said. “The listening is where everything starts, and the fellowship was able to build on that.”

The Jewish Healthcare Foundation expects to sponsor the fellowship again in early 2020 for individuals pursuing health care-related careers who are in graduate school or medical training. Application information will be made available later this year on the foundation’s website.