Talking About Death Is an Essential Skill — and One Often Lacking 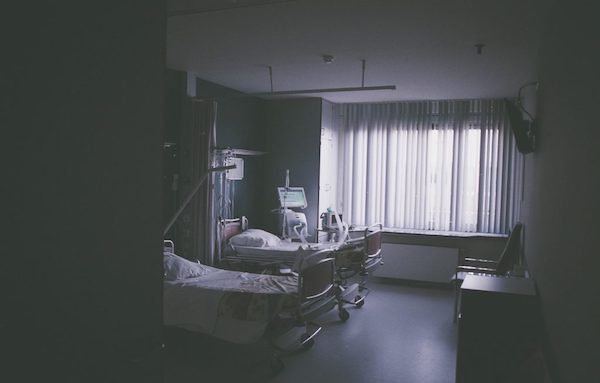 The vast majority of physicians enter medicine because they want to help people, so it’s not necessarily surprising that many are uncomfortable discussing death with their patients. However, when that discomfort reaches so far as to prevent conversations that patients need and want to have, it’s a problem, experts say.

A physician’s discomfort with talking about death can go as far as avoiding the word itself, says Helen Stanton Chapple, PhD, RN, an associate professor at the Creighton University Center for Health Policy and Ethics and College of Nursing in Omaha, Nebraska. Although she’s been out of clinical practice for about a decade, Dr Chapple recalls the euphemisms many providers used to avoid the subject.

Fortunately, things are beginning to change in terms of the training and education physicians receive. The Palliative Care and Hospice Education and Training Act (PCHETA, H.R. 1676), introduced to Congress by Representative Eliot Engel in 2017, for example, proposes amending the Public Health Service Act to beef up support for palliative care, including training for healthcare professionals.

“It’s still widely variable at different medical schools and institutions, but I think it’s becoming much more accepted that this is part of the basic skills a physician needs,” said J. Randall Curtis, MD, MPH, a professor of medicine and director of the Cambia Palliative Care Center of Excellence at University of Washington School of Medicine in Seattle.

“More and more medical students and physician are being trained in giving bad news and how to have these conversations,” Dr Curtis told Medical Bag. “But it doesn’t make these conversations easy. You’re working with a patient, and you have to give them bad news. It’s hard even if you’re trained and good at it.”

“I think there’s a concern or perception that some of these conversations could reduce hope or take away hope,” Ms Bishop told Medical Bag. Research suggests the opposite, she adds. “People with serious illness are really expecting to have these conversations and want to have them, but they’re waiting for the doctor to initiate that conversation, so sometimes it doesn’t happen.”

Interestingly, clinicians perceive difficulties with patient and family responses as bigger barriers to these discussions than their own skills and limitations, but patient research does not quite jibe with those findings.1

A small, qualitative study published in 2015 found that “many participants were very comfortable talking about their own death.”2 The authors concluded, “Being able to talk about end-of-life wishes and know how to support people who are dying or bereaved are important to many people, and they would welcome interventions to facilitate this at a societal level.”

It’s not just patients waiting for the physician to take the first step. Providers across the medical profession tend to believe that physicians should lead the discussion, both because of their medical training and because of their ability to answer clarifying questions about the patient’s prognosis, suggests a 2016 qualitative study in the American Journal of Hospice and Palliative Care.3

Broaching the topic as early as reasonably possible also gives patients more time, information, and opportunity to make the decisions they want based on their values and their place in life, Ms Bishop added.

“I may choose a different path once I start a conversation if I know what my risks are and where I’m at in the trajectory in a disease,” Ms Bishop said. “You miss an opportunity for some pretty rich discussions when you don’t have these conversations. It’s not just a medical conversation. It’s really in context of that whole individual and where they’re at in their life and what matters to them.”

The reasons for physicians’ discomfort with conversations about dying are as much cultural, social, and systemic as they are personal, Dr Chapple told Medical Bag. The health care system is set up in such a way that necessary changes in a care plan do not always keep pace with changes in a patient’s condition, particularly if those changes occur overnight or on weekends when the primary medical team is off. It’s attending physicians who make the decisions, not the nurses or residents who may see the patient — and their deterioration — more frequently.

“Part of it is nurses having to witness and inflict the suffering and getting sick of it when they think there’s no good outcome,” Dr Chapple said. “They become like a Greek chorus, commenting to each other and to individual residents, but the attending physicians make the decisions and have their own reasons.”

A Dutch research project4 found the biggest reasons for delaying conversations about a patient’s death were “timing (when is the right moment?), reserve (because of the potential emotional despair of the patient), and hope (who am I to rob a patient of their hope?).”4

Nurses may develop a better sense than doctors for some of these answers because they are the ones implementing interventions, Dr Chapple added.

“They’re hanging the IVs, putting the machines on, monitoring the patient and doing all this stuff, so I think they have a sense of when there’s no resilience left,” Chapple told Medical Bag. “So the nurses are looking at the big picture, and the physicians are trying to tweak each complication.”

That tweaking mindset often begins from the first conversation, when a physician tells the patient about a terminal diagnosis but hardly before launching into the treatments they can offer.

“There’s a way of telling that doesn’t let you deal with the existential reality of it and instead moves you immediately into the steps you’re going to take,” Dr Chapple said. She noted that some research has shown that patients are surprised when they learn their treatments were never intended to be curative, even if they were told.

Physicians’ discomfort with discussing death may also arise from differences in patients’ ethnicity or faith. A 2015 study published in PLOS One surveyed more than 1000 physicians and found that 86% rated it “a great deal” or “quite a bit” challenging to discuss death with patients of a different ethnicity.5 In a 2016 study published in the American Journal of Hospice and Palliative Care, providers (albeit mostly nurses) rated conducting a spiritual history with patients as particularly difficult.6

A 2016 systematic review of the research lends credence to all of these reasons: “Recurrent themes within the literature related to a lack of education and training, difficulty in prognostication, cultural differences, and perceived reluctance of the patient or family,” the authors wrote.7

The problem, however, is more complex and far reaching than even those reasons, going deep into the heart of who we are as Americans, the way our healthcare system is set up, and how a big part of the economy’s growth relies on technology, Dr Chapple told Medical Bag.

“In the United States, it’s all tied up together with the idea that if we’re not living and growing and using technology to gain our salvation, there’s something wrong with us, that we have to fight, fight, fight, against death,” Dr Chapple said. “There is something about our culture and what we find acceptable and desirable that’s given us the terrible healthcare we have, that spends most of its money rescuing people from death and stabilizing them and spending so much less money on prevention and universal access to healthcare.”

While that perspective is expansive, reaching toward larger philosophical ideas regarding how our culture thinks about death, it also contains a key to learning to grapple with those conversations, Dr Chapple suggested.

How to Become Better at Talking About Death

“What palliative care people tell me is that the conversation is not difficult,” Dr Chapple said. “Part of what would be helpful is for a physician to think through for themselves what their own thoughts are about dying. What are your own fears, what is the unresolved grief you have about people you’ve lost in your life? Maybe that’s part of the internal work physicians have to do for themselves.”

Physicians who find that difficult may look for triggers they can rely on, such as initiating end-of-life care conversations when a patient reaches a certain age, or when a specific development occurs in a person’s progression of a chronic disease.

An extensive 2001 qualitative study identified 6 areas particularly important for physicians to consider in talking with dying patients8: “talking with patients in an honest and straightforward way, being willing to talk about dying, giving bad news in a sensitive way, listening to patients, encouraging questions from patients, and being sensitive to when patients are ready to talk about death,” the researchers wrote.

“Practicing the conversation is the only way to get better at it and hone that skill,” Ms Bishop noted. “Some physicians have had access to training where they can role play with a mentor or with someone who has that skill set and get feedback on what they may want to do differently.”

Ms Bishop suggests starting these conversations by asking patients what’s important to them at this point in their life and how they feel things are going — and then listening.

“You get a lot of insight into what a person already knows about what their issues are or you may be surprised and find out what matters to them is not at all what you think it is as a clinician,” she added. “It just makes for holistic care when you have the conversations.”

“The goal of training is not to make it easy and fun,” Dr Curtis told Medical Bag. “Physicians by and large go into medicine to help people and make people feel better. To be in this position where you have to give bad news is difficult, but it is important, and being trained allows you to do it well and work with that discomfort.”

It’s also an ongoing conversation because people at different stages of life will change their opinions about what they want as circumstances or the disease itself change, she adds.

“We’re all going to die. For anyone who’s in the medical profession, there’s a certain subset of their patients who will die,” Ms Bishop said. “You can ease that burden if you start to have those conversations when someone is well and continue those conversations as the disease progresses.”

For physicians who are interested in brushing up on their communication skills in the face of bad news, there are a number of available resources, including VITALtalk and the Association for Death Education and Counseling. A list of organizations who provide assistance and information on multiple topics related to trauma, grief, dying, and death can be found here. 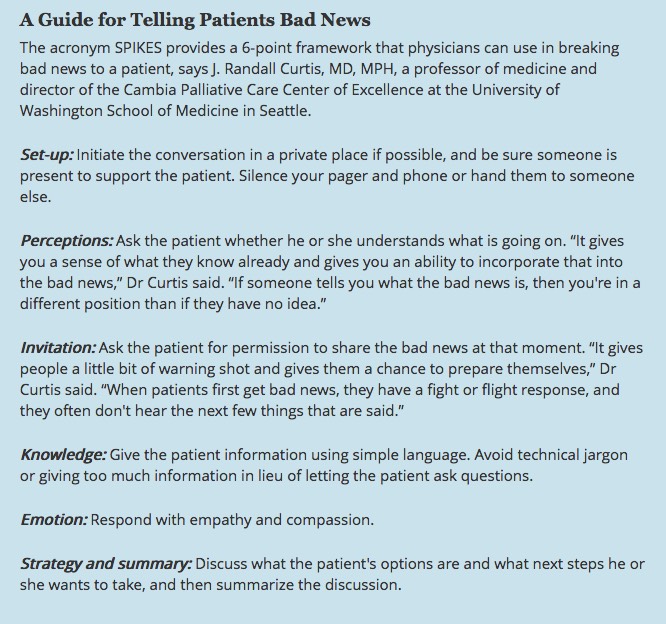